The History of Yuletide & Its Most Iconic Cake

With towering, bauble-bearing trees, gleaming multi-colored string lights, a sparkling dusting of snow and Bing Crosby’s velvety voice on every channel, the Christmas season is an undeniably magical time. Though these days the meaning of Christmas is sometimes lost in a pile of presents, a look at the holiday’s most iconic cake, the Yule Log, reveals a celebration centered on faith and festive food. 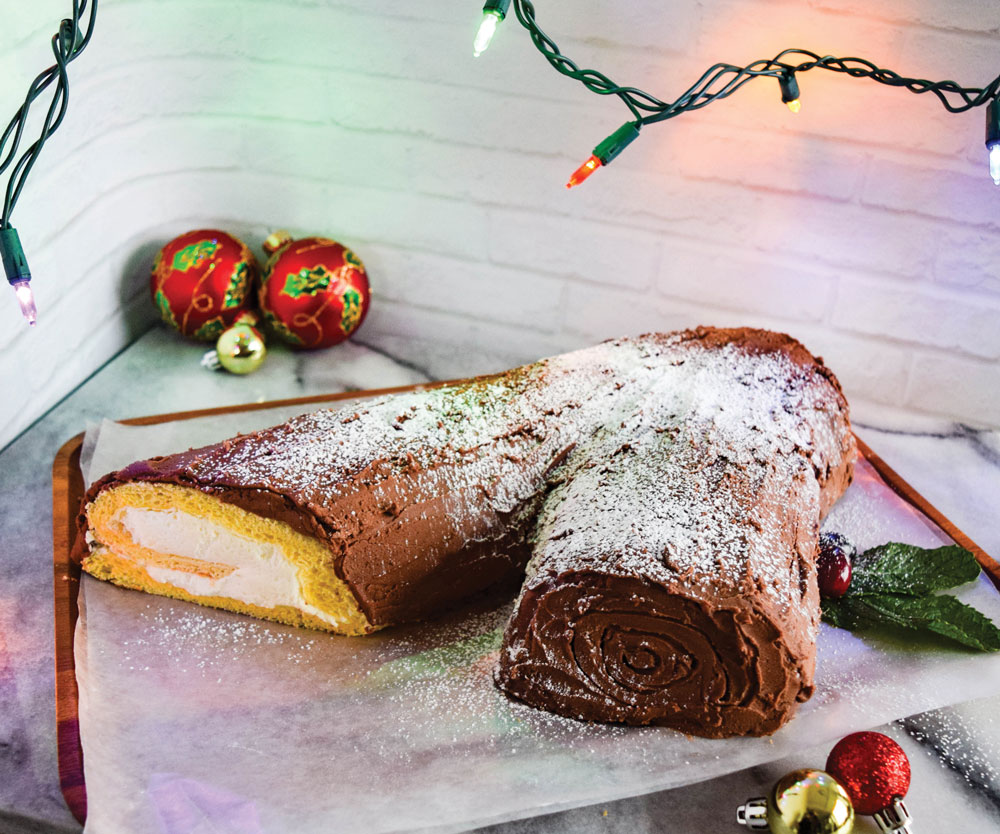 Tracing the Yule Log, or as the French say, the Bûche de Noël’s roots leads to the very foundation of Christmas, a relatively modern Christian holiday inspired by elements pulled from Pagan predecessors and Norse mythology. Centuries before the birth of Christ, the winter solstice was initially a celebration of longer days and more sunlight. This period, also known as Yule, typically spanned from Dec. 21 until early January and was recognized by bountiful feasts and warming bonfires.

In Europe and Scandinavia, cattle were killed in winter due to limited access to grain. As such, fresh meat, typically a rarity, was available in abundance and consumed throughout the season. Additionally, wine and beer in process often reached the final days of fermentation in mid-winter, making Yuletide an ideal time to celebrate. Spiritual aspects were at play, too. Animals were offered as sacrifices, and parties were thrown to honor the Norse god, Odin, known to Germanic Pagans as Jolnir.

Yule was also characterized by frequent bonfires, which again had both practical and nonmaterial applications, and is where the Yule Log tradition gets its start. Burning logs not only provided warmth in the bitter cold, but was believed to have non-secular significance as well. Norse mythology considered it a fertility ritual, each spark representing new livestock to be born. The people of Babylonia, observing Akitu, torched wooden effigies to ward off evil.

As Christianity spread, the wintertime custom of timber incineration—along with other B.C. beliefs—was absorbed into Christmas. Europeans living in the Middle Ages lit logs for the twelve days of the holiday to ensure good luck. In Medieval England, landlords were gifted firewood by their tenants. As long as the log blazed, the landlord provided the tenant’s meals.

Yule Logs increasingly became objects surrounded by superstition. It was thought that placing the ashes from the previous year’s log under the bed protected the house from lightning strikes, and couples that wrapped cloth around trunks, which they then set ablaze, believed the flame-broken bands predicted their marriage timelines.

These days, though Christmas has largely shifted from spiritual to secular and homes are fitted with thermostats and central heating, the tradition lives on in the form of a cake that perfectly represents a heritage of feasting and fire. Believed to be of French origin, the delicate sponge cake was first referenced in The English Huswife by Gervase Markham, published in London in 1623.

Some 300 years later, Francophile Julia Child popularized the cylindrical cake in American households with a 1965 episode of “The French Chef.” Hers was a classic: sponge cake filled and topped with chocolate buttercream and adorned with meringue mushrooms. Even more recently, Cronut™ creator Dominique Ansel premiered his unique take, a raspberry and rose Bûche de Noël, at his bakery in Japan. He reinvents his recipe annually with unusual flavors and cutting-edge design, while still paying homage to the centuries-old technique.

Locally, one can find traditional and contemporary Yule cakes made by Jason Reaves, pastry chef at the Salamander Resort and Spa. “The one we sell at the market is a traditional Bûche de Noël cake. It’s a chocolate roulade cake, rolled up with whipped cream or Chantilly cream filling on the inside. Then we do chocolate buttercream on the outside and comb it to look like a Yule Log, decorate it with meringue mushrooms, little leaves and different things.” He continues, “We do a more modern take on Bûche de Noël for the entire month of December on our menu at Harriman’s…we call it a two-person dessert; but in actuality, it serves three or four.” This more current rendition has, “dark chocolate mousse layered with almond joconde sponge, exotic fruit mousse and raspberry gelée. The Bûche will be finished with a decorative glaze, dark chocolate, freeze dried raspberries and gold leaf.” He even does mini Bûche de Noëls for holiday banquets.

If you are unable to stop by Market Salamander or Salamander Resort and Spa to purchase one of Chef Reaves’s Christmas cake masterpieces this year, you can always make your own. Though the final product may have you convinced it’s a daunting dessert, Reaves says, “The traditional Yule log is actually pretty easy to do.” He adds, “…it’s meant to look a little bit rustic, like a log, so the frosting doesn’t need to be perfect.”

Whether you’re hoping to fend off sinister spirits or flex your culinary creativity, make Bûche de Noël a part of your Christmas festivities. It just may become your new favorite, or at least most delicious, tradition. As Julia Childs says, “The thing that’s good about the Yule Log is that after decorating and trimming it, you can sit down and eat it too. And that’s more than you can say for a Christmas tree.”

Preheat your oven to 350°F. Line a 9×13 jellyroll pan with parchment paper and lightly grease it.
Separate the eggs, reserving both the whites and yolks in separate bowls. 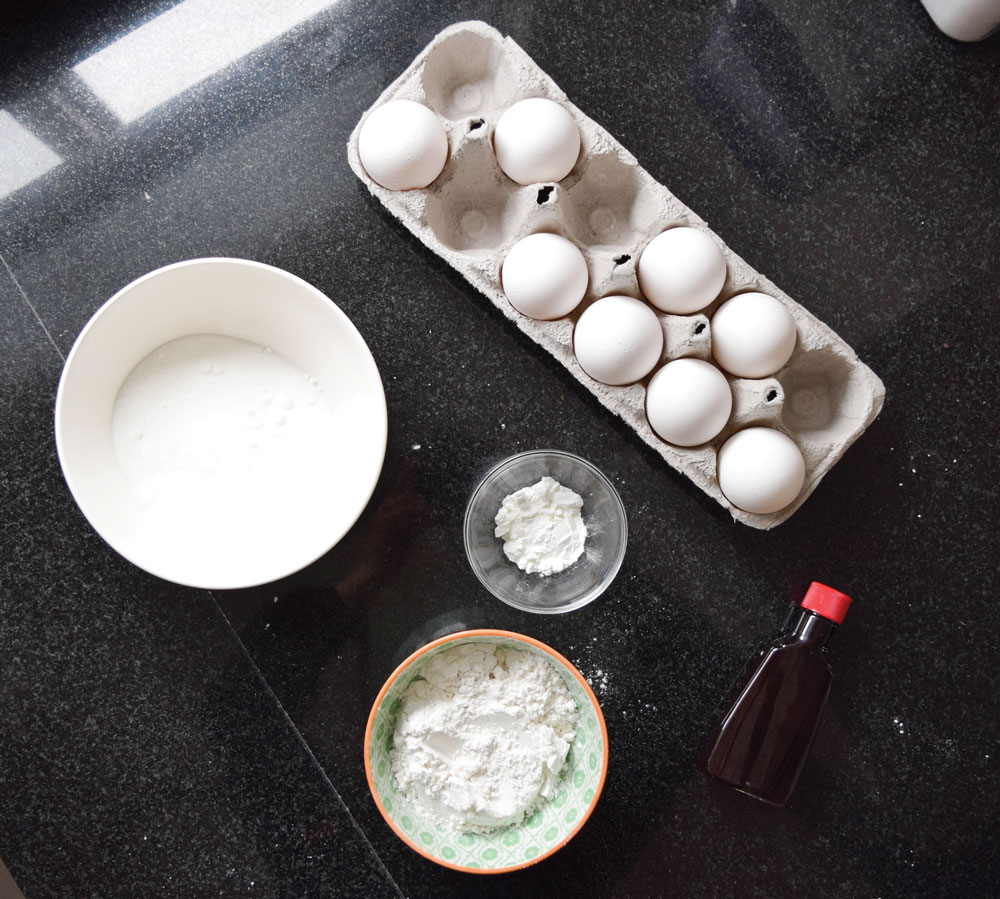 To make the cake batter, whisk together the egg yolks and sugar in a large bowl.
Stir in the vanilla. Mix together the cake flour and baking powder.
Add the dry ingredients into the eggs and sugar, whisking to combine. 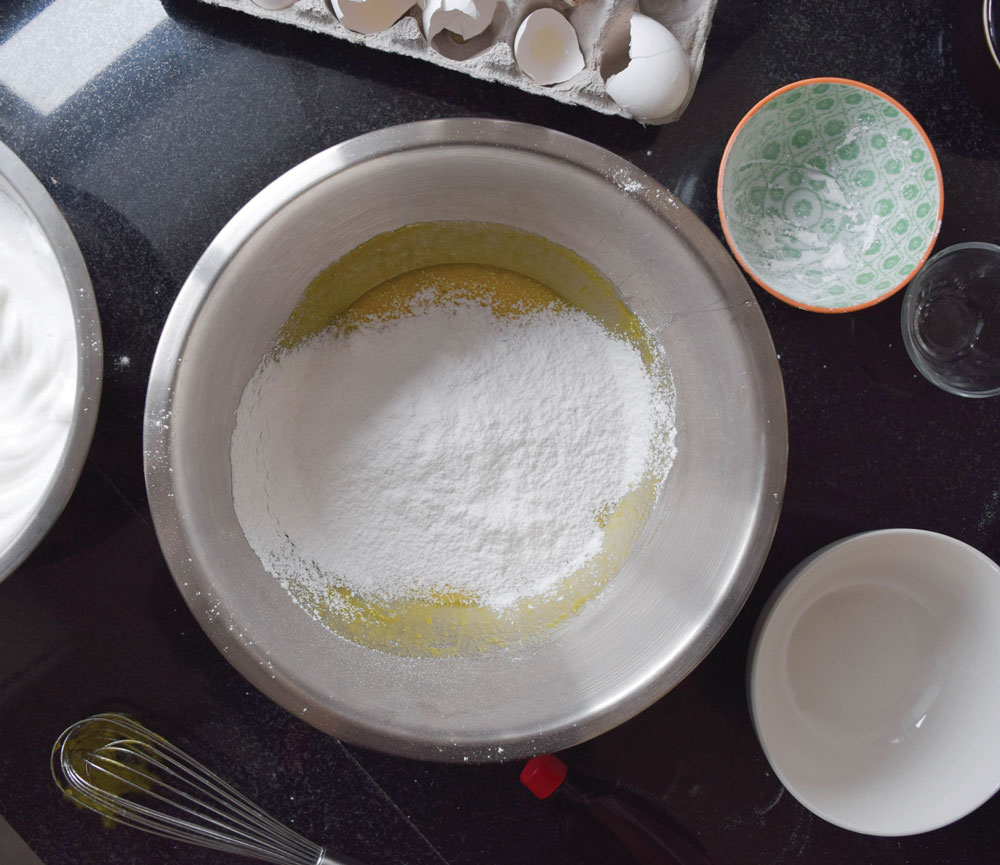 In a separate large bowl, beat the egg whites on high until soft peaks form.  This will take about five to six minutes. Add one third of the egg whites into the cake batter and fold in with a spatula. 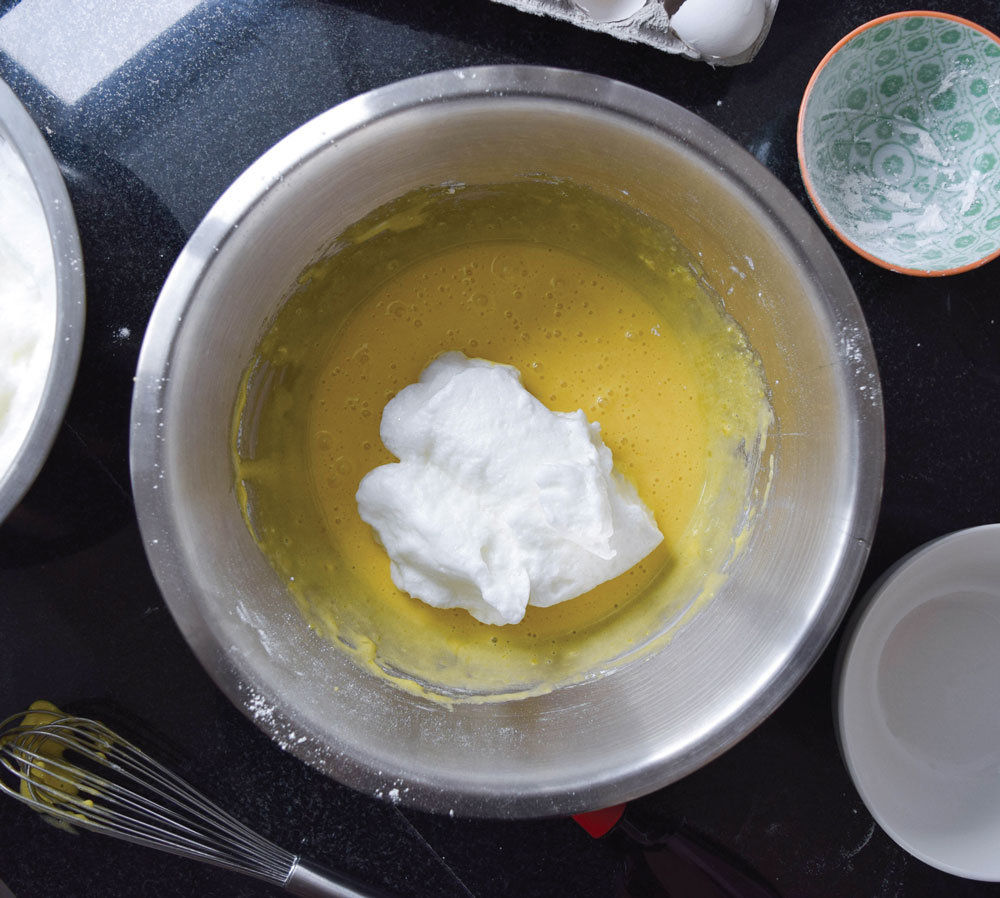 Add the remaining egg whites into the cake batter and fold in gently, being careful not to deflate the egg whites, while making sure they are completely incorporated.  Spread the batter into the prepared pan and place in the oven.Bake for ten minutes, then rotate the pan and bake for another ten minutes. 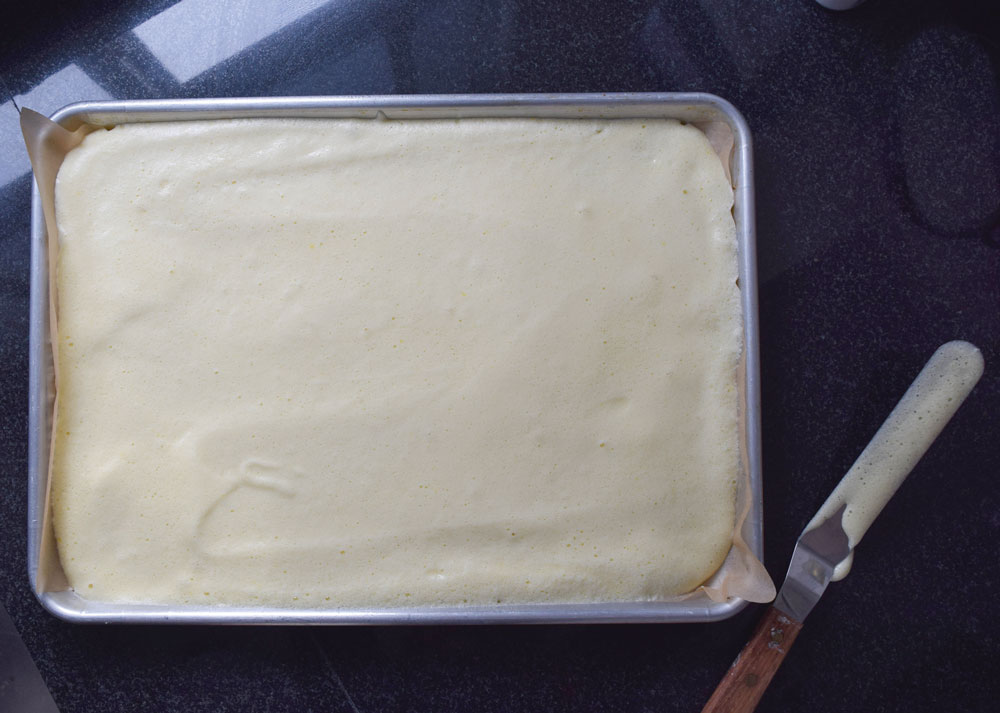 The cake is done when it has browned around the edges, springs back to the touch and an inserted toothpick comes out clean. While the cake is still warm, turn it out onto a clean dishtowel that has been generously dusted with confectioners’ sugar. Starting with the long side, roll the cake into a cylinder. Set aside to cool completely. 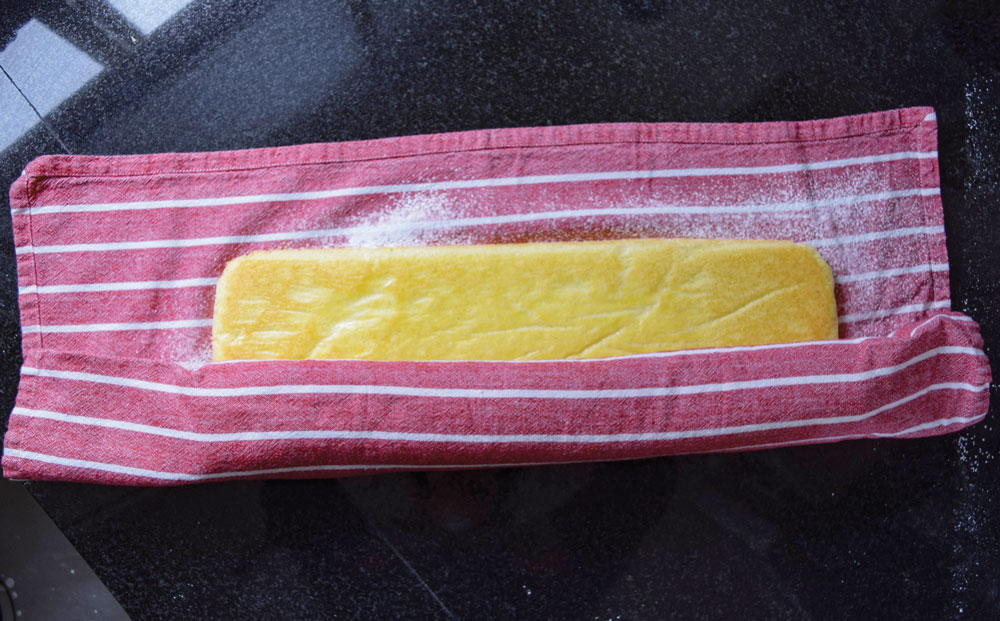 While the cake cools, make the whipped cream filling. In a large bowl,
beat the cream on medium-high speed using a hand or stand mixer with a whisk attachment.
As the cream begins to thicken, add the confectioners sugar slowly. Follow with the vanilla.
Continue to beat for another four to five minutes until the whipped cream is stiff enough to spread. Set aside.
Unroll the cooled cake onto a large sheet of plastic wrap. Spread the whipped cream filling all over the cake and then reroll it, again starting on a long side. 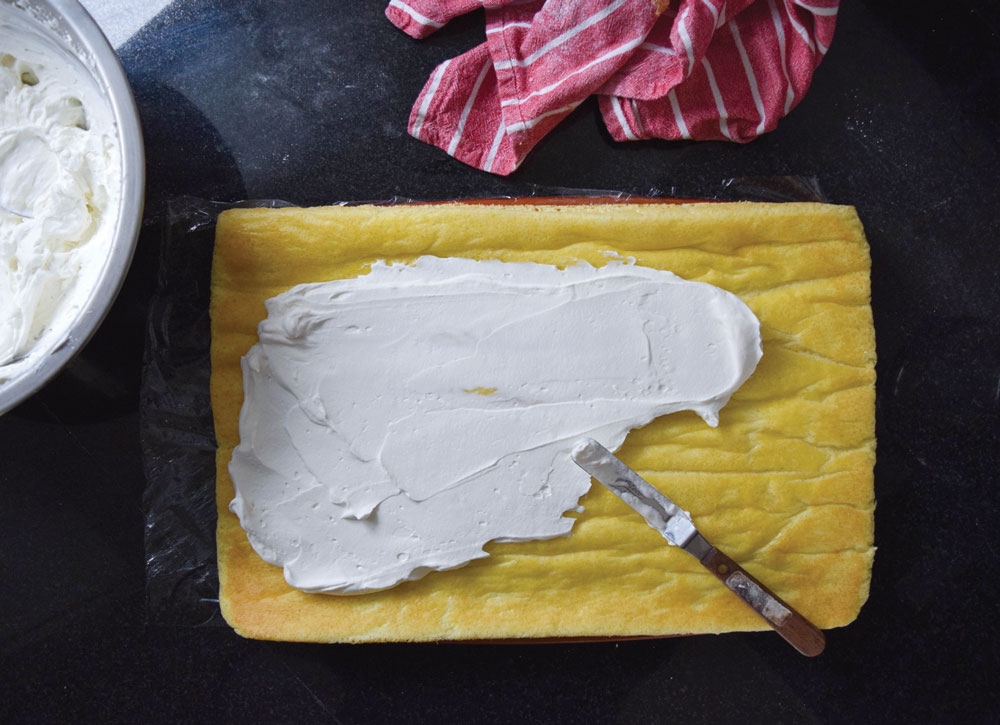 Tightly wrap the cake in the plastic wrap on which it is sitting, and transfer to the refrigerator to set up for at least an hour or overnight. While the cake firms up, make the buttercream.
In the bowl of a stand mixer or using a hand mixer, cream the butter while slowly adding the confectioners’ sugar. Scrape down the sides of the bowl as needed. When all the confectioners’ sugar is added, pour in the cooled chocolate and mix to incorporate. Finish with the vanilla. Remove the cake from the refrigerator. 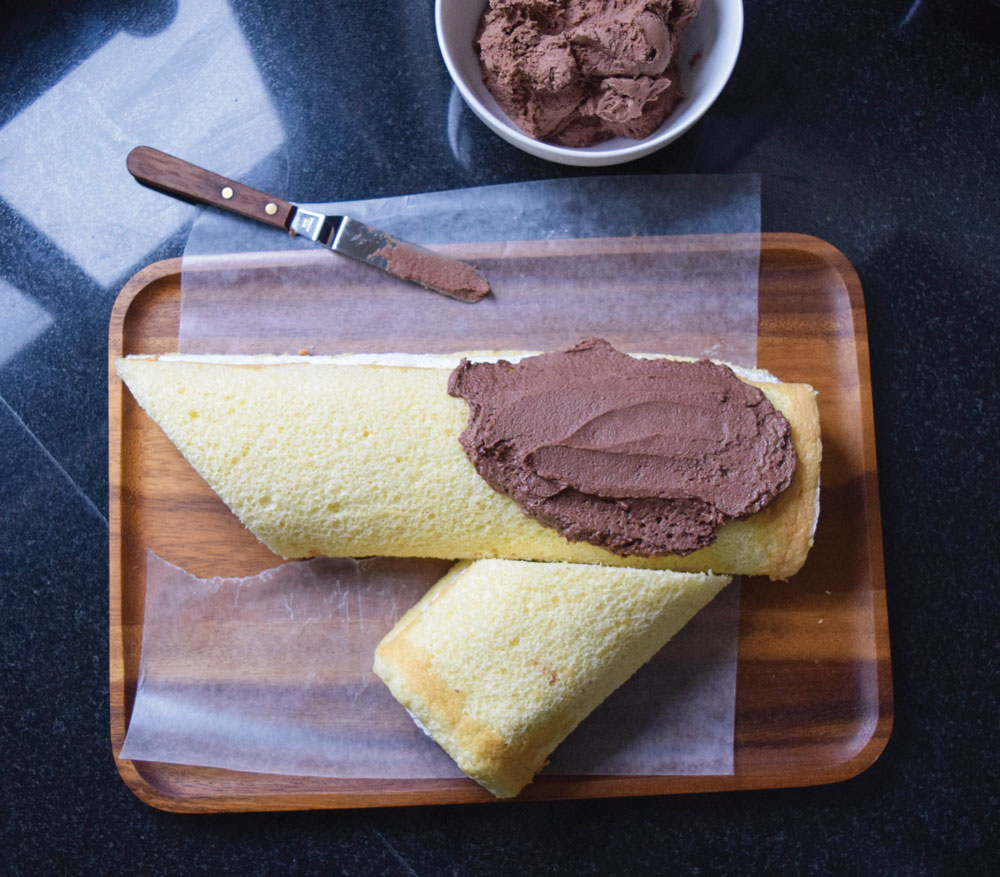 To make the branch, cut off about three inches from one end on a diagonal. Place it about half way down the center of the log. Adhere the branch with chocolate frosting. To decorate, slather the entire cake in chocolate frosting using an offset spatula. Drag the spatula through the frosting to make a rough bark-like texture all over. Decorate with mint leaves, fresh cranberries and a dusting of powdered sugar snow. Serve immediately!