The first four fabulous polo players have been named for the National Sporting Library & Museum’s sixth annual Polo Classic fundraiser on Sunday, Sept. 11 at Great Meadow in The Plains. This year, Ignacio “Nacho” Figueras, John Gobin, Bill Ballhaus and David Greenhill will compete and additional polo players are being secured. 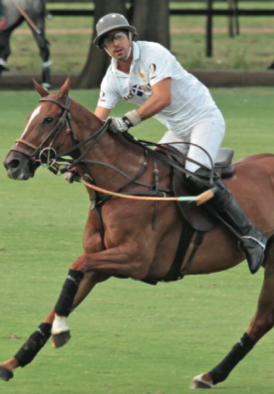 Born in Argentina in 1977, Nacho Figueras developed a love of horses and the game of polo by the age of nine. When he was 17, he began his professional polo career playing for the very successful White Birch high-goal team in the U.S. From there he has played in Spain, England, Argentina, Brazil, Singapore and the Philippines.

Figueras, who has appeared in many Polo Black advertisements for Ralph Lauren, plays for the Black Watch Polo Team in Bridgehampton, New York and Palm Beach. In the U.S. offseason, he returns to his Argentine ranch in spring and fall, where he has Cria Yatay, a polo pony breeding business.

Many in Middleburg are familiar with John S. Gobin who grew up in Rehoboth, Massachusetts. He began playing arena polo in interscholastic competitions at the age of 15. From the age of 17-19, he trained to become a polo player in Argentina.

Gobin began by playing with polo patron Geoffrey Kent, the founder of Abercrombie & Kent, and later played on the Budweiser Polo Team. He won the Westchester Cup alongside Adam Snow, Owen Rinehart and Robert E. Walton at the Guards Polo Club in England in 1992. He won the Camacho Cup on the American team against Mexico in 2009 and has competed on Team USA in the 2011 Polo World Championships (World Cup) against Argentina.

Gobin has also played on the Duck Hill Polo Team at the Aiken Polo Club in Aiken, South Carolina, and has won the U.S. Arena Championships four times. He has been the manager of the Great Meadow Polo Club in The Plains since 2007.

Bill Ballhaus is a third-generation aerospace engineer, and has spent the last 15 years leading both publicly-traded and privately-owned technology-oriented businesses. In 2008, Forbes named him as one of America’s 21 most powerful CEOs age 40 and under.

Ballhaus began playing polo in 2011 and has since played year round in Virginia, Aiken, Wellington, and Argentina. He competed in the 2015 Sentebale Royal Salute Polo Cup, the Veuve Cliquot Polo Classic in 2014 and 2015, and the National Sporting Library & Museum’s Polo Classic fundraiser in 2012 and 2013. Ballhaus and his wife, Darrin own and operate Beverly Equestrian, a full-service multi-disciplinary equestrian facility near The Plains.

David Greenhill is the co-owner and president of SD (Satcom Direct), serving business aviation and military government markets worldwide. Greenhill attended the United States Air Force Academy, earned a bachelor’s degree in economics from the University of North Carolina at Chapel Hill, and a master’s in philosophy and theology from Yale University.

Originally from North Carolina, Greenhill has called Virginia home for over 15 years. An entrepreneur, he owns Greenhill Winery & Vineyards in Middleburg, home to internationally acclaimed wines, as well as Middleburg Life. Greenhill is a member of Great Meadow, Banbury Cross, and Palm City Polo Clubs, and has trained all over the world including Dubai, Geneva, Paris, and London.

According to NSLM Executive Director Melanie Mathewes, “our polo fundraiser is a celebration of sporting culture and an opportunity for sporting enthusiasts to experience a very exciting part of the NSLM mission.”

Proceeds from the Polo Classic support the NSLM’s mission of preserving, promoting, and sharing the literature, art, and culture of equestrian, angling, and field sports.

(Tickets for the NSLM’s sixth annual Polo Classic are available at NationalSporting.org, or by calling the NSLM at 540-687-6542 ext. 24.)