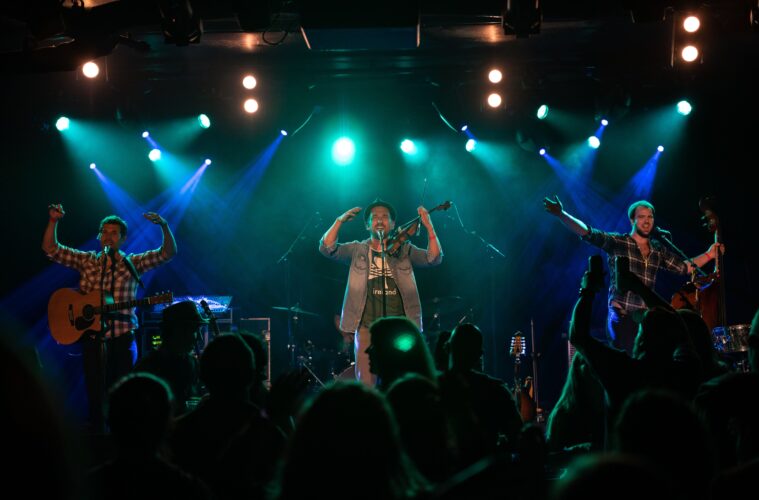 As live music makes its return, music lovers flock to local shows with excitement and maybe a little caution. Live music ushers the return of community and many of our favorite things — dancing under the stars, supporting local breweries and wineries, and turning strangers into friends at live shows. Catch these three local bands across the Northern Virginia area this summer. Trust us when we say: You won’t want to miss this.

Husband and wife duo Amy and Jamie Potter started playing in different bands but decided to combine their musical talents and form The Crooked Angels six years ago. The band’s name is a nod to Emylou Harris and the late Gram Parsons, who created a band called The Fallen Angels.

“It was a cool 70s traditional country with some psychedelic elements,” Jamie said. “[The name ‘The Crooked Angels’ is] not a sinister thing, but I think everybody has real humanity that is good and bad, and we can explore that through music.”

Amy sings and plays guitar, and Jamie plays guitar and the keyboard. While they primarily play local shows, they have performed as far south as Charleston, South Carolina. Their genre spans country, bluegrass, and Americana.

“Music is a universal language,” Jamie said. “Beyond political and religious affiliations, it’s something that cuts across all demographics. You play to your strengths. [It’s] communication without some grand fundamental message. This is what I’m feeling and enjoying, and maybe you connect with that, maybe you don’t.”

Outside of the band, the two have unique and exciting careers. Jamie writes novels for young adults, with newly published “Thomas Creeper and the Gloomsbury Secret” through Regal House Publishing. He was recently interviewed on Good Morning America and ABC News. Amy is a master healer and practices reiki.

“Music is the joy,” Jamie said. “We have our gears going in different areas, and we come together and are in the community. It’s great to come out of the cloister and be in the world again.”

Where To Catch The Crooked Angels This Summer:

Learn more about The Crooked Angels and find details on upcoming shows by visiting facebook.com/thecrookedangels.

What began as a two-person fiddle and guitar duo has turned into the 5-person Short Hill Mountain Boys. The founders of the band live in Lovettsville and named the group after the Short Hill Mountain. Primarily a cover band, the group plays throwback covers people haven’t heard before.

“Most of our stuff has not been on pop charts ever,” John Bestwick, the band’s co-founder, said. “It’s fresh, new material that people will hear. It’s all fun music. It has a definite bluegrass background and roots. It’s got country, swing, jazz, folk, soul, and Mo-town music.”

“We just love playing music together,” Bestwick said. “That’s the tie that binds us. That’s what I love most: the camaraderie and musicianship with some of my best friends.”

The band members all have full-time jobs, but the band is their creative outlet. “Music is a passion of ours, and we are always going to do this,” Bestwick said.

Where To Catch The Short Hill Mountain Boys This Summer:

Low Country Boil On The Mountain Sat., July 17 from 5-8 p.m.
South Mountain Creamery
8305 Bolivar Rd, Middletown, Md. Bring your friends and family and kick back to the sounds of Short Hill Mountain Boys, who will strum into the night with a blend of bluegrass, old-time, Cajun, classic country, and folk music. Tickets available at southmountaincreamery.com.

Bluegrass on the Half Shell
Sat., Aug. 21
Henway Hard Cider,
18780 Foggy Bottom Rd, Bluemont, Va. Join us at Henway Hard Cider for a full day of local bluegrass bands that will have you flatfooting in no time! Tickets required.

Scythian was founded over a decade ago when brothers Alexander and Danylo Fedoryka began singing in Old Town Alexandria as street performers. Since their humble beginnings, they have grown into a successful folk-rock band, performing across Ireland and the United States.

During COVID, the band live-streamed shows every two weeks to a cumulative audience of over 600,000. To support the band, fans bought t-shirts and sent them money over Venmo. But now, as live music returns, they are eager for fans to come out in person.

For the first time since 2019, they are hosting Appaloosa, their annual music festival, on August 13-15 in Front Royal. The festival has hosted Grammy-award-winning artists and was voted the best music festival in D.C.

Tickets vary in pricing, from general admission to VIP tickets that include luxury chalets for glamping at the festival. This year’s festival will be smaller than previous years, but with 15-20 artists performing, attendees are still in for a treat.

“We are keeping it very affordable because a lot of people don’t feel comfortable because of COVID,” Danylo said. “It’s going to be one of the most reasonably priced festivals out there.”

With ample outdoor space, the festival is the perfect way for people to “dip their toes in the water and get back into social environments” while still being socially distant, Danylo said.

“It’s not a guarantee that live music is going to come back unless people take risks,” he said. “If you ever get in a car accident, you have to get in the car as soon as possible, or it reaffirms that you’re scared. With music, we have to throw these festivals, or otherwise, people are going to get comfortable in their fear.”

He pointed out that before COVID, live music was at an all-time low. He credits the slowness with the ease of Netflix, which provides entertainment without needing to leave the house. But he believes live music is going to come back stronger.

“The type of appreciation people are going to have for live music is going to be a throwback, like the 60s again,” he said. “It’s an electric vibe. It’s kind of my suspicion that this will be our best year.”

Where To Catch Scythian This Summer:

Appaloosa Music Festival Fri., Aug. 13-15 at 3 p.m. Skyline Ranch Resort, 751 Mountain Rd., Front Royal, Va. Appaloosa will be a joyful weekend that will show the world that live music is not dead. We suggest getting your tickets early.

Learn more about Scythian by visiting scythianmusic.com, and get more details on the Appaloosa Music Festival by visiting appaloosafestival.com. ML