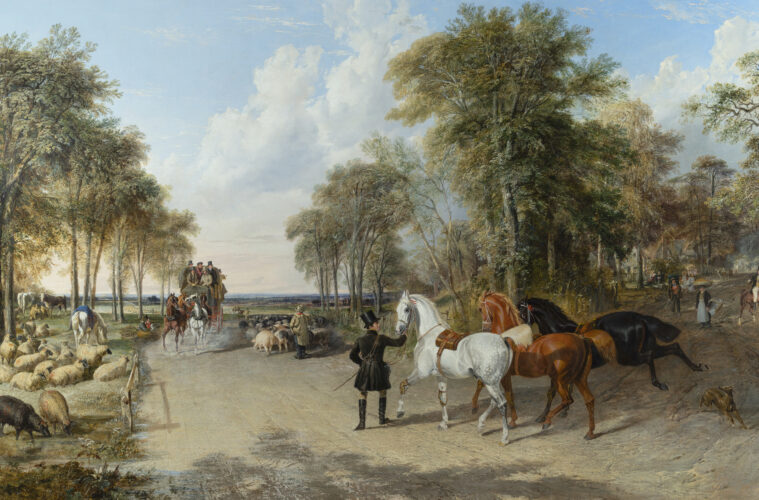 Written by Dulcy B. Hooper

For visitors of Middleburg’s National Sporting Library & Museum (NSLM), the past 10 years have offered a delightful series of memorable exhibitions.

When it opened its doors to the public in 2011, the museum’s inaugural exhibition was entitled Afield in America: 400 Years of Animal & Sporting Art. It featured over 100 works, all of which were on loan from major institutions and private collections from across the country.

Built in 1804, the historic house which would become the museum was bequeathed to the National Sporting Library (NSL) by George L. Ohrstrom, Jr. It was then renovated and expanded in the two years prior to the museum’s opening with the addition of 10 small-to-medium galleries, two hall galleries, and an extended section boasting two large galleries. All the artworks installed in the main entry space and in the second-floor galleries were acquired through donations and bequests subsequent to the museum’s opening. According to Claudia Pfeiffer, the NSLM’s deputy director and George L. Ohrstrom, Jr. curator, when the permanent collection was initially installed in 2012, the museumwas only able to fill a quarter of the galleries.

At the time, initial plans for the museum focused on developing two loan exhibitions per year for the two large galleries and featuring the permanent collection in Vine Hill’s historic wing. “Those traveling exhibitions allowed a buffer of time for us to research, develop, and curate the museum’s own topics,” Pfeiffer says.

A Decade Afield features over 120 18th- to 20th-century American, British, and Continental artworks and pays tribute to the 10-year growth of the museum’s permanent collection. It is divided into 10 sections representing the “broadening scope and depth of NSLM’s holdings.” Some of the museum’s earliest pieces can be found in the Federal-style galleries in the Vine Hill mansion wing.

“It was a great opportunity to thematically organize the NSLM’s art collection and showcase the works with bold color choices for the walls,” Pfeiffer emphasizes. “The goal was to create an impactful visual experience for first-time and returning visitors alike and to give an overview of how the collection came to be and grew to what it is today.” The museum was closed for the month of May in preparation for the exhibition.

The beginning section of the exhibit, entitled “The Start,” creates an “aesthetic reminiscent of a country house, its inhabitants, and the country way of life,” Pfeiffer explains. Many of the best pieces in this section are portraits of key figures instrumental in expanding the library. The next section, “Setting the Course,” features two galleries dedicated to Felicia Warburg Rogan and honors her donation of 15 important British sporting art paintings. According to Pfeiffer, those works “set the bar for the NSLM’s standards moving forward and brought in iconic paintings by John Emms and Alfred James Munnings.”

The section “Mixed Bag” is an eclectic assortment of sporting works including a 41-inch English sterling silver model of a coach, NSLM’s earliest artwork, “Horse in a Landscape” by Abraham von Calraet, and paintings by Franklin Brooke Voss.

The remainder of the exhibition highlights the subsequent growth of the collection with such themes as “Spurring On,” “On Point,” “Casting the Line,” “Tally Ho!,” “The Menagerie,” “A Record Place,” and “Winners Circle.”

As for their next 10 years?  “We look forward to what the future holds,” Pfeiffer says.

This article first appeared in the July 2022 Issue.