By Dulcy B. Hooper | Photo by Richard Hooper

Years ago, my husband Richard and I spent the better part of a day wandering through the Paris Flea Market in Porte de Clignancourt. It was, and I believe still is, the largest concentration of antique shops in the world.

The flea market must be seen to be believed. As the day went on, Richard and I kept finding ourselves in front of a showroom featuring antique spiral staircases. There were at least a dozen of them, each one its own work of art and propped up from floor to ceiling in a most impressive presentation.

“I think we should consider getting one of these,” Richard said.

“But what would we do with it?” I asked. “Prop it up against a wall or something?” I was still a bit jetlagged.

“We could build an addition onto the back of the house,” he said. “It would be beautiful. I promise.” It struck me that Richard wanted that staircase as much as I wanted a dog.

I had always had dogs, rarely being without one since the earliest days of childhood. Zen, my little Pekingese, had lived for only a few months after Richard and I met, and my many entreaties for another dog had led nowhere. This was my chance.

We returned to Paris the following year. The shop’s proprietor, Claude Aucoutourie, invited us to his home, a 1700s millhouse surrounded by outbuildings full of antique staircases going back hundreds of years. Before we began the mammoth effort of selecting one, Claude took us back to the millhouse for lunch and a very pleasant bottle of French wine.

Hours later, we found a staircase that seemed perfect for us. It was from around 1880, according to Claude, and had formerly been in a house in Champagne, where it connected a two-floor library. In discussing the price, which Richard translated for me, I asked about shipping costs. Claude’s English was as limited as was my French. Both assured me that the cost of shipping would be a reasonable $1,500.

I found that implausible, but c’est la vie. I thought, instead, about my soon-to-be-dog/s.

After lunch, Claude drove us to a nearby village to meet the craftsman who would be working on our staircase. He had been an apprentice for nearly 20 years but finally had his own shop and set of tools. We were warmly welcomed into the shop, and in the coming months, we would return twice to visit our staircase.

While Richard was busy designing the addition, I was hard at work looking for our dog/s. A friend had rescued a Chinese Crested, and the dog’s personality was so delightful that I was leaning in that direction. Richard, however, balked at having a hairless dog.

“No problem,” I said. By this time, I had amassed some knowledge about my dog of choice. “The recessive gene creates Chinese Crested Powderpuffs.” 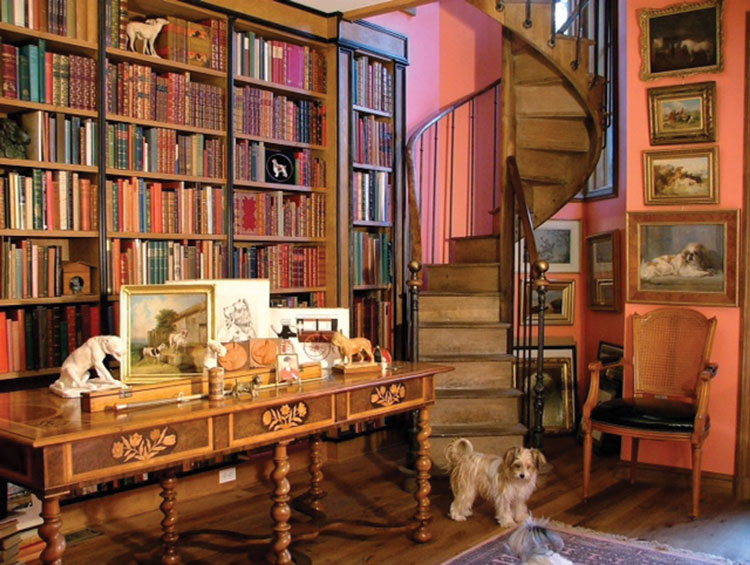 I thought that I would have my dog/s in a week or two, but the search went on for months, during which time I made a complete nuisance of myself to Chinese Crested breeders up and down the East Coast and then on to California, Texas and Arkansas.

In the meantime, Richard had continued to work intently with Claude and the craftsman. The measurements had to be precise, down to 1/16 of an inch in every direction. It required reams of drawings, diagrams, measurements and faxes, as every angle of the staircase had to dovetail precisely with the addition.

Finally, the addition was finished, and we now were just awaiting the completion of the staircase. At long last, I had the first of my two dogs, Sophie. A Crested breeder from South Carolina had called out of the blue. “Are you the woman who’s been looking for female Powderpuffs?” he asked. Four months later, Isabel had joined us as well.

Nearly two years since our first trip to the Paris Flea Market, we got word that the staircase was ready to be shipped. When Claude faxed the final drawings and transport papers to Richard, the staircase was already at Charles De Gaulle Airport. I wasn’t there when those final faxes came through, but I can only imagine Richard’s shock: The landing was 180 degrees different from all of the diagrams and plans, meaning that the staircase opened directly onto a wall. After many calls and faxes back and forth, Claude had the staircase picked up at the airport and brought back to the village for further . . . refinements.

Weeks later, we got word that the staircase was again at Charles De Gaulle. But now there was another problem: Our beautiful staircase was 18 inches too long to fit into a FedEx plane, the original mode of transport upon which the shipping estimate was based. Instead, it would require a special flight on Air France, incurring a multitude of additional charges. The $1,500 quoted by Claude quickly approached $14,000 – $15,000. Nonetheless, the staircase was scheduled to ship that week.

“I got a call today,” Richard said a couple of evenings later, trying to sound casual. “Looks like we might have to hire a crane to get the staircase off the plane in New York.”

The Air France flight was headed for LaGuardia and then Dulles, and we anxiously awaited news of its safe arrival. And then the staircase that we had waited for for nearly two years simply disappeared, with no one on either side of the Atlantic able to explain where it might be. Weeks later, it was found in a warehouse in New Jersey. Richard only found where it was when he received a call indicating that there would be additional storage fees if he didn’t claim it.

At last, the staircase boarded another flight, this one bound for Dulles. It arrived early on the morning of New Year’s Eve. A local contractor who we had used for the addition met Richard at Dulles. The staircase was loaded onto the truck, driven to DC, delivered through the narrow alley behind our home with inches to spare, and slid off the truck onto bales of hay outside of the addition. A door was removed to corkscrew it inside. Working with my brother-in-law and two friends, Richard got it installed within hours. It was a perfect fit.

At the end of the day, we toasted the staircase and the dogs, and all was right with the world. ML