Middleburg’s full-time residents and the town’s weekend tourists share one thing in common: Sooner or later, they are going to need to put a little gas in their vehicle to travel in and around hunt country. The Middleburg Exxon, located on Route 50 at the edge of town, is often the place that they will stop.

For many years, the station was owned and operated by Middleburg local Billy Journell. However, these days, customers can drop in and make the acquaintance of the new owner, Marty Cook.

Although he is new to Middleburg, Cook has been involved in the gas station business throughout his adult life. The 68-year-old co-owned his first station in Fairfax, Virginia, with his father and operated four other stations before purchasing the Middleburg Exxon about four years ago.

“I knew Billy Journell for many years since we made our livings in the same business,” Cook recounted. “One day, Billy walked into my station in Chantilly and asked if I’d like to buy his station in Middleburg.”

“It’s great to work in your hometown, you know everybody, and I can walk to work.”
-Lisa

Cook knew that Journell had operated the business for about 50 years and that the station enjoyed an excellent location as well as an established clientele for gasoline purchases, auto maintenance and repair. Recognizing a profitable venture, Cook needed little research before he became the station’s new owner and a new face in the Middleburg community.

Drawing on his years of experience in running his new venture, Cook discovered that his hunt country station shares some similarities with his city stations. “We average a little over 100,000 gallons of gas a month in sales,” he said, noting that, “It’s funny, but my margin of profit on gas is about the same as when I started in this business some 40 years ago.”

Cook counts on the fuel sales to cover the station’s day-to-day business costs. He added that fuel sales naturally slow during the winter months, which can make those months the hardest for the business.

However, Cook added that there are differences in operating a station in a small town rather than in the city. He noted that one of the biggest differences is the slower, more relaxed pace of country life.

According to Cook, “In the city, everyone runs at 60 miles an hour and wants his or her car fixed ‘right now.’ Here, people are willing to wait a few days for their cars to be repaired. In Chantilly, I had to have three loaner cars on hand in order to keep pace. In Middleburg, I have one car, which is rarely used.”

Cook appreciates Middleburg’s small town ambience, and it is important to him to keep the station an example of the friendliness and hospitality for which the town is famous. He keeps these qualities a priority when he hires his new employees, knowing that, to his customers, they will be the “face” of both his business and the town.

When he found the station in need of a qualified mechanic, Cook noted, “I wanted a candidate who was good at his job, but equally important would be someone who had great energy and was good with people.” Cook found that person in mechanic Blake King. 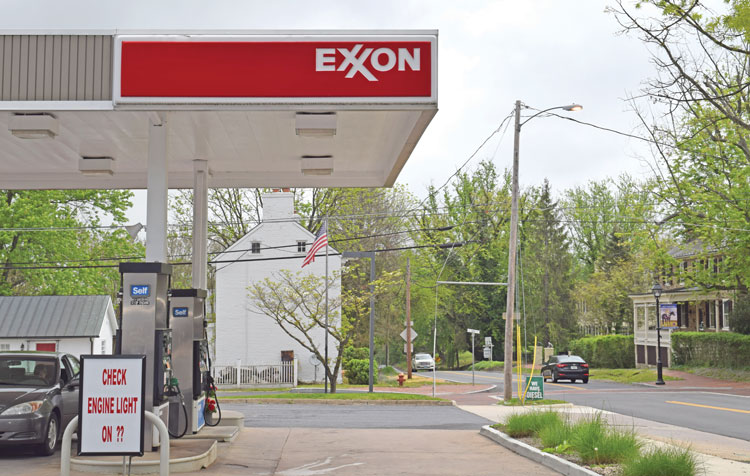 King, also from Chantilly, finds the slower pace of the smaller Middleburg community to his liking. “I love working on cars plus having the time to explain the problem to the customers and show why and how it has to be fixed.” King feels taking the time to discuss issues with customers is the way to establish great, trusting, long-term relationships.

Four Middleburg locals comprise the rest of Cook’s staff: Lisa Johnson, Lisa’s daughter Brittany Johnson, Lisa’s niece Becky Cross, and Shaun Thomas. Lisa, who has been employed by Cook since he took over the station, manages the business’s daily accounting.

“It’s great to work in your hometown,” Lisa said. “You know everybody, and I can walk to work.”

Her daughter Brittany recalled growing up on a local farm where her grandparents worked. “I have been in this area my whole life. I love working so close to home, and  I get to spend a lot of time with my mom,” Brittany noted.

Brittany added that she hopes the customers will stop by to meet Marty and get to know him better. “Once people meet Marty,” Brittany said, “they will see what a nice person he is.”

Cook acknowledged that when he first took over operation of the station, he spent more time “behind the scenes.” He noted, “I was definitely more behind the scenes; not necessarily on purpose, but now I would like to move more to the forefront, particularly with established customers.”

Whether you need to top off your gas tank or have a repair made, consider driving into the Middleburg Exxon. Stop by and say hello to Marty Cook, the owner who is working to carve out his own niche in our special community. ML