Time and circumstances can have a way of keeping us waiting—for justice, for truth, for answers—but however patiently time makes its course, those of us determined enough to unearth such elusive entities sometimes do. 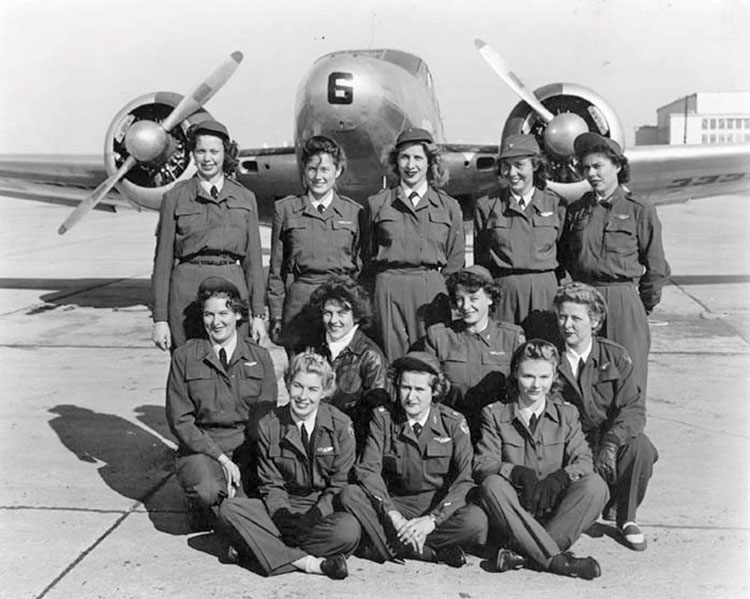 Dorothy Ferguson (back, second from right) a Greenwood Air Base.

It has been over 70 years since the end of World War II. Thanks to the stories that have survived, we know the narratives of many of its heroes. Some accounts are still being uncovered, and one of the most recent to see the light of day is the remarkable and underrated story of the Women Airforce Service Pilots (WASP).

When we think of the Allied forces, we flip through a mental gallery of images with gallant young men at the forefront, fearlessly streaking across a gray sky in B-29 bombers. As it turns out, a corps of about 1,100 female pilots (chosen from a pool of 25,000 applicants), all civilian volunteers, racked up 60 million miles flying every type of military aircraft under the direction of the United States Army Air Forces between 1942 and 1944.

The WASP was formed in response to the dramatic shortage of qualified pilots after the attack on Pearl Harbor. These female aviators, who arrived with at least 200 flying hours already under their belts, took on critical flying jobs at home in order to free up male pilots for service overseas. 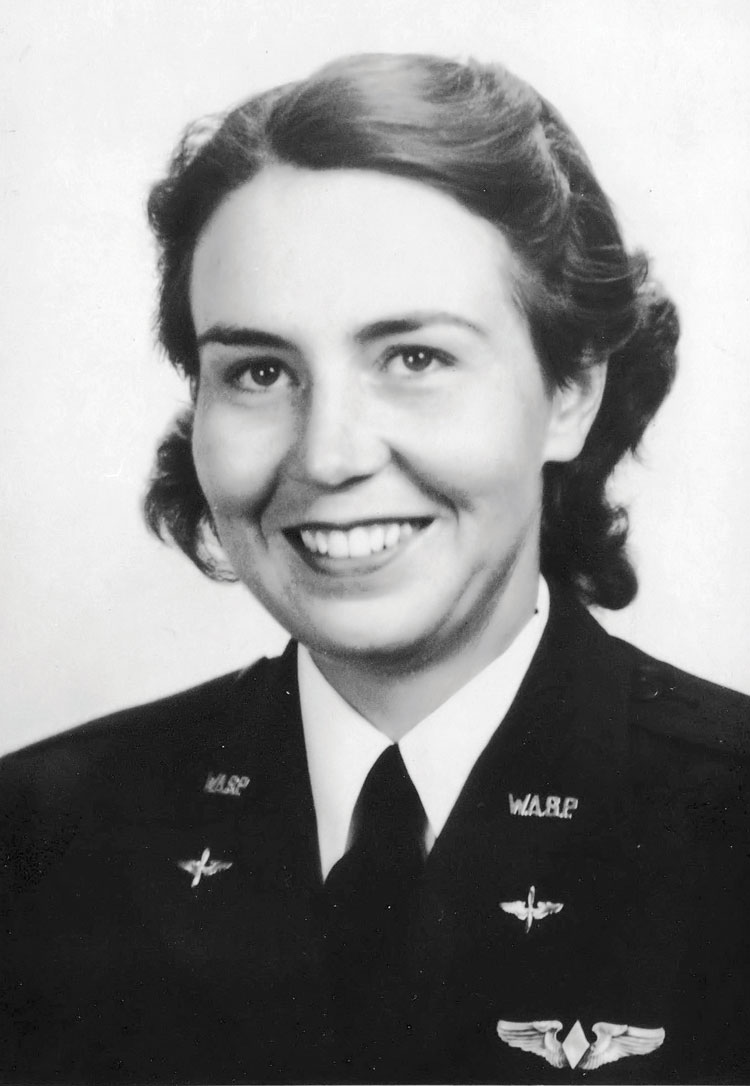 Dorothy Deane Ferguson, a North Carolina native, served in the WASP program in the 9th training class of 1944. Before that, she flew with the Civil Air Patrol, watching from the air to spot enemy ships and submarines along the Atlantic coast. When she joined the WASP, it was with the aim to eventually secure a career in the Air Force. After her military training concluded at Avenger Field, in Sweetwater, Texas, she was assigned to Greenwood Army Air Base in Greenwood, Mississippi, where one of her jobs was to tow targets attached to BT-13 and BT-15 planes so that inexperienced male trainees could practice their shooting—with live ammunition.

“She was not squeamish,” notes her nephew Jack Ferguson, a Middleburg resident. “It seemed like very a dangerous job to me.” Dorothy, who was in the WASP for just a few months before the program was cancelled, recorded over 266 flying hours while stationed in Greenwood.

Each class of women who entered the program experienced the same rigorous military regimen as their male counterparts, participating in ground-to-air anti-aircraft practice, towing targets for gunner practice, testing newly refurbished aircraft to ensure they were suitable for cadet training, conducting night exercises, serving as instructors, and transporting cargo and male pilots to embarkation points. The work was dangerous indeed, and ended up claiming the lives of 38 women before the end of the war. 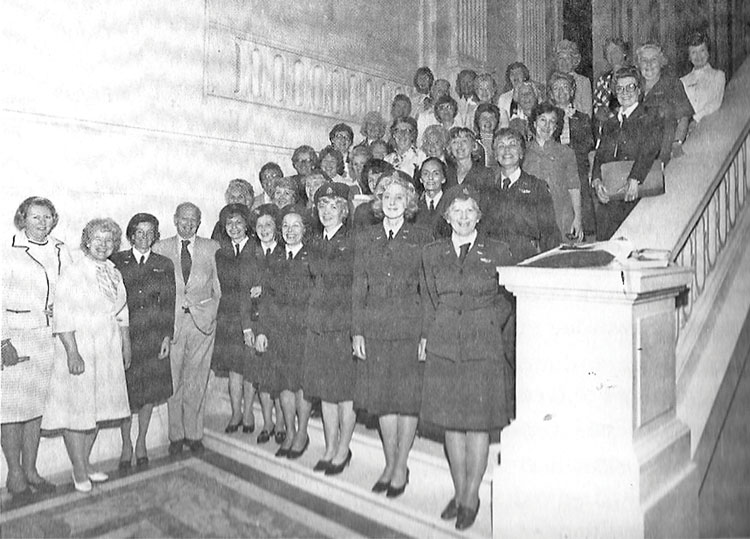 Part of the 1979 WASP contingent lobbying for official recognition of their service.

Though Dorothy and her peers expected to earn a spot in the military for such marked commitment to the war effort, the WASP program—along with the implied promise of military status—dissolved after just two years. The WASP received no recognition, no honors, and no military status until 1977. It appeared that while releasing men for duty was considered an act of patriotism, taking their place was not only controversial—it was out of the question. Also forbidden to these women was any discussion of their service after the WASP program disbanded on December 20, 1944.

“Members of the WASP had been sworn to secrecy during the war,” says Jack. “No one released them from this promise until sometime in the 1970s, when an announcement was made that women were going to be able to fly in the Air Force ‘for the first time in history.’ That’s when they started sharing their experiences.”

By the time the truth was ripe for the picking, Dorothy had earned a law degree from the University of Richmond and was working as a lawyer for the IRS in Washington. This placed her in a favorable position to push hard for the recognition of the WASP’s role in World War II. So that’s exactly what she did.

“Her career enabled her to do a lot of work behind the scenes to move the petition along, though she didn’t take much credit for doing this,” shares her niece, Carol Hybl Zepfel. “I only know about her efforts from talking to other WASP members.”

Today, little is known about how Dorothy developed a love for aviation. Jack’s father, her last surviving sibling, passed away in 2014, which means time has swallowed any explanation of how or why she was so drawn to flying. But Jack has a theory.

“Her father enabled her spunk, curiosity and bravery,” he says. “I’m convinced that if she flew for the Civil Air Patrol before she joined the WASP, that means she must have had flying lessons. My grandfather, I am sure, made that possible.”

Besides serving her country, earning university and law degrees, and having a career as a lawyer, Dorothy did something else rather revolutionary. In 1962, she and two of her female colleagues formed Women’s Life Insurance Company of America, whose unprecedented business model was devoted exclusively to selling life insurance policies to other women. In a 1961 press release, the entrepreneurs released a statement that they “didn’t plan to take any risks on the weaker sex—men.”

“I never met Aunt Dot,” says Jack’s wife Leah, “but I find her fascinating on two levels. First, she did very unique things for her time. On top of that, she was a daughter of the south. Southern women in this country in particular were under the thumb of chauvinism—that’s just the way it was. The fact that any of these women achieved what they did is incredible to me.”

After an enterprising and extraordinary life, Dorothy passed away January 27, 1992. She received her honorable discharge from the United States Air Force that June—four months after her death. It wasn’t until 2009 that President Obama signed legislation to honor the WASP with the Congressional Gold Medal. The official award ceremony took place in Washington in 2010, with only about 250 former WASP in attendance.

Fortunately, that is not the end of the story. In 2016, award-winning writer B. Garida wrote screenplay for a documentary called “WASP,” which follows the story of the founders and members of the WASP program and its struggle for recognition. The film will go into pre-production this year. Producers Sheila Johnson, David Greenhill, Mark Sennet and Bo Derek are honored to bring the accomplishments of these trailblazing
patriots to the forefront. ML