When Black and White Turn to Gray

At Boulder Crest Retreat, combat veterans heal and find a full spectrum of possibilities for their lives.

Most combat veterans would tell you that. Despite the unspeakable horrors of war, still these men and women viewed their service as a time when they were most fulfilled, connected and emotionally assured.

It was upon their return from combat that they realized how fragile their mental health was. It was not just the atrocities they had experienced as combat warriors, but also the uncertainties they experienced upon returning that contributed to the fact that 2 million combat veterans suffer from post-traumatic stress disorder (PTSD) and 22 veterans commit suicide every day.

Upon their return home, the gray crept in and muddied the black and white of military service. There were choices again and the excitement of combat was gone. There was no need for the hyper-vigilance that was trained into them, no reason for their sleepless nights. They wondered who had their back. They suffered from depression and searched for what would fulfill them like their military service did. They were still, after all, the same men and women who risked their lives to protect our country and longed to be of continued service.

When they realized they were falling apart, that their marriages were in shambles or lost, they were drinking too much or using drugs, they were under or unemployed, financially on the edge and that they were living in a state of hopelessness, they sometimes sought help from the Veterans Affairs. The usual diagnosis was PTSD and the prescription was pharmaceutical and talk therapy that rarely had any lasting benefit to the veteran who soon returned to his former state of despair.

Boulder Crest Retreat, a military and veteran wellness center in the village of Bluemont, Virginia, has a different approach. Progressive and Alternative Training for Healing Heroes (PATHH), is a seven-day retreat for combat veterans that centers on post-traumatic growth (PTG), the positive psychological changes that take place because of traumatic experiences. PTG is not resilience, the bouncing back to a former level of existence, but rather the rising to a higher level of functioning and a truer sense of fulfillment.

“When I went through the program (PATHH), I realized civilians do care. We are civilians who had the combat experience, but we forgot how to connect with the people who didn’t share those experiences. When I went back after the program, I was able to relate to other people and make connections I couldn’t make before,”
-Ritchie

By all accounts, this approach is working. Though evidence of its success is anecdotal at this point, PATHH is midway through an 18-month independent evaluation.

“We are getting to the heart of the matter and their issues quicker, easier and with much less treatment than other programs. Here it’s training, not treatment,” said Suzi Landolphi, a civilian, senior PATHH guide and the only trained therapist on staff. “The veterans are accomplishing in seven days what takes 18 months of traditional counseling by the best in the field.”

The rural setting of the 37-acre property lent itself to the many modules used at Boulder Crest to help address the different issues facing the participants. Transcendental meditation, yoga, culinary and horticultural therapy, art and music therapy, a labyrinth walk, archery, tomahawk throwing, equine therapy, hiking, kayaking and bonfires were all multipurpose activities that helped train the veteran in changing perspective. Often the activities helped the warrior to slow down, focus and appreciate the richness of nature and life, opening them to the concept of turning struggle to strength, the core of PATHH. 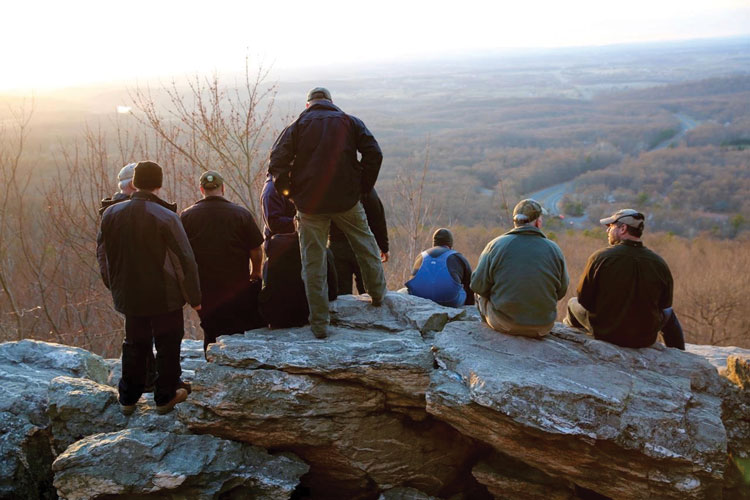 The program at Boulder Crest focuses on education, emotional regulation, wellness practices and a plan to take home and continue what they have learned. PATHH also uses, among other things, a “wellness triangle” as a goal. The three points are mind, body and financial with spiritual filling the center.

“Before you go through PATHH, it’s a mess, like Pick-Up Sticks, and when you achieve the balance, things change in their importance,” explained former Army paratrooper and property manager James Ritchie.

PATHH programs are typically made up of group of six combat veterans who quickly transform into family. They continue to be a group after finishing the program and have regular, periodic check-ins. They stay in touch, helping each other through the inevitable difficult times.

“I went home and couldn’t sleep. I was having an issue so I texted one of the guys in my group and 10 minutes later I got a group call from all five of the guys in my PATHH group. We talked until 5 a.m.,” said Ritchie. “They’re family now.”

Like most participants, Ritchie was a veteran of the 14-year Iraq and Afghanistan wars and entered the program when several of his Army friends threatened to take him if he didn’t enroll himself. His marriage had blown up, he had little contact with his young daughter, he had a good-paying job but not a penny in his bank account, was drinking one to two bottles of gin every night and had disengaged from all his prewar relationships.

“I had that 1 ounce of growth that I was trying to accomplish, though. The one thing I wanted from the program was to be a better father to my daughter. That’s all I needed to get help,” said Ritchie.

“With everybody, there are many fissures, all kinds of cracks. But then there’s one that shatters the rest. For me that was seeing fear in my two sons’ eyes. Fear of me. And feeling that there has to be a better way. That desire got me here,” said Paul Downs, a PATHH graduate and guide and 10-year Marine veteran of the Iraq and Afghanistan wars.

Notably, the only requisite for being admitted to the program was a willingness and desire for change in the veteran’s personal relationships and life goals.

“It’s all about connection and relationships,” said Landolphi. “When they have that spark and they want to be better for their families, we can take that and show them the best way they can be better is for them to change themselves first.”

Arguably the most important discovery regarding PTSD was that the overwhelming majority of combat vets with PTSD, somewhere around 80 percent, had childhood trauma that they entered the military with. That fact, in conjunction with their strong desire to serve, was in large part why these men and women entered the armed forces to begin with, to escape the horrible reality of their homes and families. Their combat experience was the tipping point, but most of their trauma was from childhood neglect and sexual, physical and psychological abuse.

Though PATHH does not focus on these traumas, the wounded warriors were asked  to address them.

“Clayton and I hit it off” said Downs.

“They deserve to know what happened and not feel shame and to understand what it is they need to practice to bring about PTG from their childhood,” said Landolphi. “So they do look at their childhood trauma and they make a list of those in red marker, but they have to list in blue all of the gifts they got from that, as well.”

Downs told a story of abuse perpetrated by his mother. He knew that his anger came from what she did to him and what she didn’t allow him to do on his own. Because of PATHH, he could move forward and embrace the blue ink. “But with all of those things she did, she loved me and she read to me every night. She gave me a love for literature that I never would have had. She gave me an ability to recognize pain in others and to be able to empathize on a level not everybody gets.”

Ritchie’s childhood trauma continued to affect him when he returned from his eight years in the Middle East. He isolated himself from everyone in his life except for three friends, all fellow paratroopers who had been through the same thing he had, one of which saved his life in combat, “I took people’s sympathy as an insult. I’m not weak and I don’t need your sympathy,” he thought. “I was a professional wounded warrior. I thought everything had to do with my service. I was in combat, but it’s not who I am.”

“When I went through the program (PATHH), I realized civilians do care. We are civilians who had the combat experience, but we forgot how to connect with the people who didn’t share those experiences. When I went back after the program, I was able to relate to other people and make connections I couldn’t make before,” Ritchie said.

Much change took place in these veterans after going through the program, but much of their military experience was retained. “I took the uniform off Sept. 11, 2014, but I still wear it and the Marine leadership principles I still live. There are certain belief systems that will always ring true,” said Downs.

The mission of Boulder Crest Retreat is to help veterans achieve a happier, healthier life and to return them to pursue service and leadership roles in their families and communities. Their military training could translate successfully into their civilian and family life with the right practices and guidance.

In addition to the PATTH program for combat veterans, there are PATHH programs offered to families, couples and caregivers. The nonprofit organization also hosts couples and family rest and reconnection stays. The four beautiful, well-equipped cabins and access to all the property’s recreational activities are provided to guests at no charge. 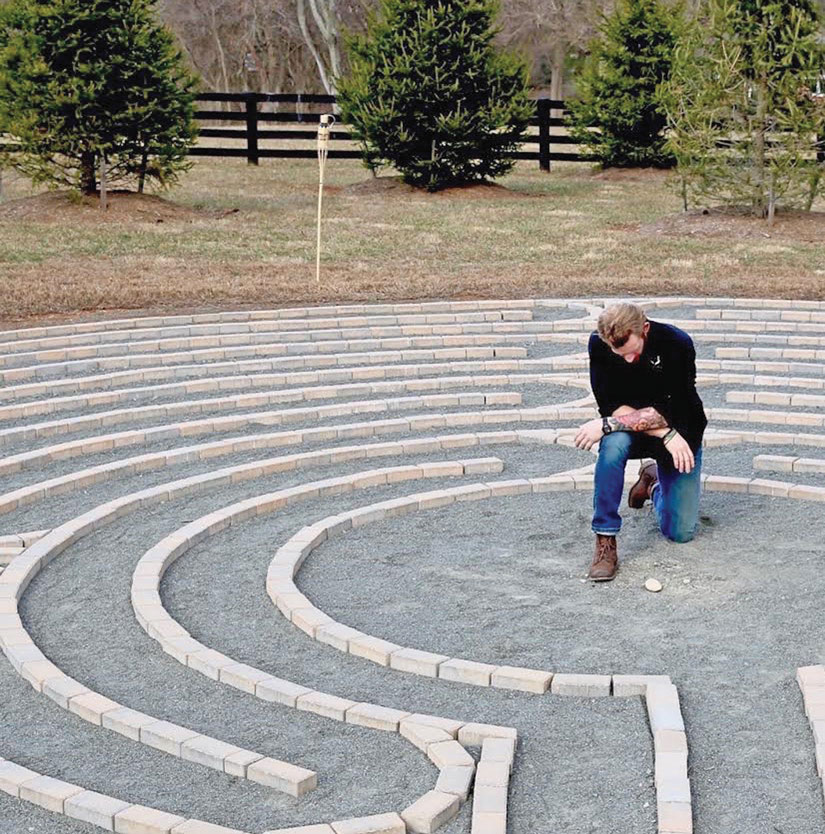 What began as an invitation for a combat veteran to fish and stay at Navy veteran and founder Ken and Julia Falke’s home for rest and respite, is now a flourishing retreat that has ushered 125 combat warriors through the PATHH program and 2,400 people through the weekend and weeklong vacations. There are plans for a sister retreat to be built in Tucson, Arizona, and conversations with a multitude of other nonprofits across the country with the hope of implementing the PATTH program to make it more geographically available to veterans throughout the United States of America. The Falkes donated the land that was adjacent to their estate and provided the seed money for Boulder Crest, but the retreat was completed by and operated exclusively from private donations and grants.

There is a sacredness to Boulder Crest Retreat — in its bucolic and peaceful setting, its tender care of our wounded warriors and in the veterans themselves, who arrive believing they’re broken and leave hopeful and ready to pursue a rich and balanced life.

“I’ve gained a deeper appreciation for life. I notice things like a flower growing out of pavement,” said Downs, who was suicidal when he came to Boulder Crest.

For our wounded warriors, all that was black and white turned gray is suddenly alive with color. ML

This is the first of two Boulder Crest articles.