He grew up in a small, farming town in northern Indiana where, he admitted, he “had more fun than study” in high school. After he graduated, his parents generously offered to mortgage their house to send him to college. Instead, he decided to join the Navy, intending to use the GI bill for college after finishing his tour of duty. He ended up staying for 28 years. 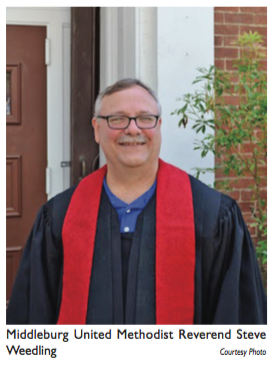 Weedling became a nuclear submarine technician and worked on six different subs over 20 years. After that, he served an Navy instructor based in Pearl Harbor, Hawaii, teaching courses that included equipment systems, leadership, and others.

While still in the military, Weedling met his wife, Faith. She was deeply involved in the Methodist church growing up, and found her own religious calling early on. She was ordained as a deacon in 1997 and as an elder in 2005.

After retiring from the Navy, Weedling was looking for a second career, but said he still had no sense of
calling to the church because he had no history attending services as a child.

“I thought I was going to be a school teacher,” he said. “I was looking at a program called troops to teachers. I put in an application, was doing all the work, but the application kept getting lost…. It was just a road block after road block.”

After two years, he took another path.

“One day I was looking at the internet, I put in schools…and Eastern
Mennonite seminary came up,” he said. “The more I looked at it the more I felt like I need to go to school there.”

He visited the campus once before applying.

“During the four years that I was in seminary there, my call was solidified,” he said. “And I knew I was supposed to be a pastor….There were a variety of religious traditions represented in the student body, so there were lots of great conversations. It was good because it challenged my beliefs. [I had] to decide, why do I believe that? Do I really believe that? And what do I base that on? So those conversations for me were very formalizing.”

Middleburg is Rev. Weedling’s third assignment. In the Methodist church, pastors are appointed by the bishop and the bishop’s cabinet in the Virginia conference. They take into account each of the pastor’s skills and gifts, and then are matched with a congregation that needs their particular skills.

Pastors in the Methodist church are moved to new congregations periodically, usually about every seven years.

“We are an itinerant system, which means that we move around,” Rev. Weedling said. “It began with (Methodist Church founder) John Wesley in the 1700s in England. He was known for being a horseback preacher, traveled about a quarter of a million miles on a horse over the course of his ministry time. We still look at that as a fundamental part of who we are. It is a part of our DNA.”

Rev. Weedling also has the Rectortown Methodist church under his purview. All those parishioners to minister to might seem a bit stressful, but he said he relishes the opportunity to be involved with two congregations.

“I find it keeps me moving,” he said. “Keeps me young, keeps me energized.”

Though he’s only been here for two months, he said he and his wife and their two children already feel very much at home.

“I love the town,” he said. “It has a quaintness that reminds me a lot of towns in northern Indiana. I could almost walk down the main street here and think that I was back home again.”

Pastors are always on call for an emergency in their congregation, but they do have some time off. During his down time, Rev. Weedling said he enjoys woodworking, camping and reading.

“My wife would say that I like to read so much that she calls me an encyclopedia of useless information,” he said. “I like to say that I am a trivia expert.”