There’s an old joke regarding Shakespeare in which a professor asks a student for an opinion about one of Shakespeare’s plays. The student blithely replied that it was enjoyable, but full of too many cliches. Unknowingly, the student had attested to the genius of Shakespeare, the creator of the expressions that had become so familiar.

The genius of Henry Alken (1784-1851) suffers from a similar over-exposure. A few dozen prints keep reappearing in antique shops and galleries with such regularity as to dull the response of the viewer to Alken’s skills and wit. Those few dozen prints are but the tip of the iceberg (to use a hackneyed phrase) of the graphic work (not to mention paintings) that he produced. 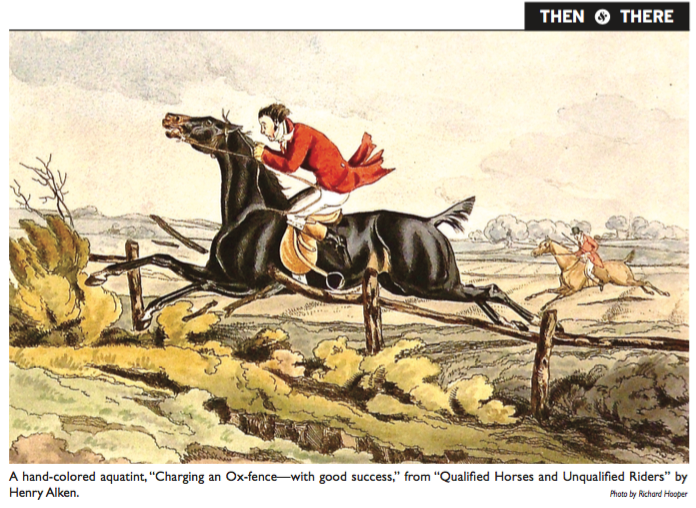 No complete catalog of his work exists and the closest thing to a bibliography of “books” he illustrated is by Willis van Devanter, one-time librarian to Paul Mellon, which lists 85 works. Many of the “books” were essentially a collection of plates bound together in paper wrappers with a title and perhaps a few pages of text.

Alken began his career as a miniaturist, his name appearing for the first time in an exhibit held in 1801. A keen sportsman and observer of society, he found his niche in 1815 with his first sporting work,  “Qualified Horses and Unqualified Riders.” Perhaps he was unsure of the reception it would receive, because it was published with the name of Ben Tally-Ho, “an occasional visitor to Leicestershire,” as the author/artist.

“Qualified Horses” is illustrated with seven hand-colored plates and was written in response to “Indispensable Accomplishments” by Robert Frankland, who “considered it only necessary that the horse should be well qualified.” Alken’s words and illustrations turn Frankland’s work on its head. Alken states:

Every species of Rider every
Horse does not Suit

What’s a good London Rider
may here prove a Brute

For he must face danger
without losing Breath

Or give up all hope of
enjoying the Death

A Death he may meet
with ere he returns Home

And he stands a good chance
of its being his own.

Alken used the same captions that Frankland used for his illustrations, but changed the outcome to reflect the results of an unqualified rider. An example is a plate captioned “Charging an Ox-fence— with good success” in which a horse and rider crash through the fence (rather than over it) to make it into the next field. Alken would frequently use this device of illustration, wittily contradicting the caption throughout his career.

The year after “Qualified Horses” appeared, Alken’s first book to use his name was published. However, he continued to use Ben Tally-Ho on a number of works for years.

Alken’s draughtsmanship could be sketchy or finely finished and highly detailed and his prints represent both approaches. His themes ranged from hunting, shooting and angling to cattle and horses and dogs. He also produced sets of illustrations on carriages and racing. There’s even a superb set of plates depicting medieval knights that is attributed to him.

His social commentary, which also frequently ran through his sporting works, was expressed in such books as “Symptoms of Being Amused.”  He criticized art criticism in a delightful set of plates entitled “A Touch of Fine Arts” and his “Specimens of Riding Near London” is a treat. Touching on the human condition, he created illustrations for “Shakespeare’s Seven Ages of Man” in 1824. That work must have been the inspiration for his “The Seven Ages of the Horse” issued in 1825.

Within all of this, and much more, Alken also created an amazing oddity with the title of “The Progress of Steam,” which he called a “modern prophecy.” Published in 1828, it’s a series of four plates depicting such contraptions as a man riding a model of a horse with a self-contained steam engine and carriages without horses, but again with steam engines built in. The scenes,  exquisitely drawn and beautifully colored, are set in London and hint at the motor car of the future.

Alken’s work falls into two categories of occurrence: that which is frequently seen (which after a while can dull the senses) and the rest, which is either scarcely or rarely seen. And when one is fortunate enough to encounter the scarce and rare, it’s always interesting, frequently amusing and sometimes dazzling.

(Richard Hooper is an antiquarian book expert in Middleburg. He is also the creator of Chateaux de la Pooch, elegantly appointed furniture for dogs and home. He can be contacted [email protected])