Beginning as early as 1910, Britain, France, Germany and Austria began purchasing American war horses. By 1918, nearly one million American horses and mules, the heart of the world’s military industrial complex before the automobile, had been purchased and shipped overseas.

From where had they come? How did they travel? Who were they, these beasts of burden, heart, courage, strength, stamina and faith, destined for unknown
but certain death?

The United States Army Quartermaster Corps Remount Service was activated in 1908 for the purpose of purchasing, processing, training and issuing horses and mules to the cavalry, infantry, pack and field artillery and transportation corps.

War horses loading onto rail cars to be shipped to Newport News, VA and on to Europe. Photo curtesy of the Army Signal Corps

Phillip Gibbons, a historian now retired from the U.S. Marine Corps, speaking at a recent event at the National Sporting Library & Museum in Middleburg, told a standing-room-only crowd that the Front Royal Depot was originally called “Camp Stonewall” because the Army had decided to build a stone wall around all 5,000 acres.

“They quickly gave up that plan,” Gibbons said. He and his associate Brian Petruskie, DVM, and fellow historian, explained that the Remount service’s early mission was to find and purchase suitable cavalry horses and mules. Having witnessed the decline of American equine stock after Britain had purchased over 100,000 horses and mules to fight in their African Boer War and the U.S. Army’s purchase of over 20,000 horses and mules to fight in the Spanish-American War, the lack of quality war horses in America early in the 20th century was evident.

The Remount Service’s first order of business was to establish a standard for future military mounts. Calvary mounts for enlisted men should be Thoroughbred or half-bred Saddlebred, Morgan or Arabian geldings, at least three years old, 15.1-15.3 hands, have a deep heart girth and a short back, good withers for a saddle, good leg bone, sloping pasterns for an easy ride with round, hard feet. They must be bay, black, chestnut or sorrel with a minimum of white markings. A few grays were chosen, but no duns, palominos, roans or varicolored horses were accepted. Artillery mounts must be 15 to 16 hands, 1,200 to 1,300 pounds, light draft or heavy hunter type geldings. Mules 14.2-15 hands weighing 1,000 to 1,250 pounds were ideal.

Military contractors scoured the countryside for farm and ranch horses. Purchasing boards were set up in Idaho, Colorado, Kentucky, California, Texas, Wyoming, and in Front Royal, Virginia. However, this system often resulted in the acquisition of older substandard mounts, since purchasing was at the whims of a supply and demand market dictated by a middleman.

According to Phil Livingston and Ed Roberts, authors of “War Horse,” the definitive text on the history of the Remount Service, “The primary problem facing the purchasing boards was finding the raw material which would meet the Army’s standards within the price limits.” The problem, particularly in the West, lay at the very heart of America’s horse-breeding program; though there were many thousands of horses roaming the west, few were of military quality. A young officer, Colonel Fred L. Hamilton, while looking over the string of mounts at the Fort Riley cavalry school early in the 20th century, commented wryly, “Small wonder that Sitting Bull
caught Custer.”

In 1910 Congress passed an Appropriations bill attached to the Department of Agriculture’s budget, and William H. Taft signed into law a nationwide horse-breeding program. Fashioned after the New York Jockey Club’s plan to improve breeding practices in New York state, in which stallions donated by Jockey Club members were put to stud on farms throughout the state, the Army began its fledgling breeding program on the East Coast. The USDA purchased 33 Thoroughbred, Morgan, Saddlebred and Standardbred stallions in 1913 to stand at Remount sub-stations in Vermont, Virginia and Kentucky where mares, designated suitable for breeding, were sent for stud services. In addition, the mares were kept for one year while their foals were born, cared for and weaned with the Army getting first choice of foals.

By the end of WWI the Remount Service owned 60 quality stallions. In 1920 the Remount’s mission changed, from one of servicing and caring for mares at designated stations and sub-stations, to one of distributing stallions to ranches and farms around the country so that more mares could be conveniently serviced at less government expense. Remount officers designated civilian agents within their districts were loaned a stallion to breed to his or her own mares, and their neighbors’ mares, for a minimum stud fee of $10, which served as the agent’s payment for standing the stallion. Agents were responsible for care of the stallion. The Army got its choice of foals. Without question, this breeding program is considered responsible for the high quality of horseflesh in America throughout the 20th century and today.

One of the best-known stallions standing at Front Royal was “Gordon Russell,” by “Marchmont 2nd” out of “Tokalon” by “Tammany,” donated to the Remount Service by the Kentucky Racing Association on October 27, 1920. “Gordon Russell” was at the Front Royal Depot in 1924 and 1925 and then in the hands of civilian Agent B.G. Ray of Happy Creek near Front Royal. Cavalry officers purchased their own mounts; many were mares. “Gordon Russell” sired two-time Olympic medalist “Jenny Camp,” who was ridden by Captain Earl F. (Tommy) Thompson in the 1932 Los Angles Olympics where she won individual silver and team gold. She went on to compete in 1936 at the infamous Berlin Olympics against superior German-bred horses. Standing 15.3 hands with less than ideal conformation out of an unknown mare, “Jenny” was athletic and brave, going on to win another individual silver in Berlin.

Herodot stood at stud at the Front Royal Remount Depot in the 1920s. Photo curtesy of the Warren County Historical Society

At the peak of the Remount Service in 1940, there were 700 government-owned stallions available to civilians for breeding across the country. During WWII, from May 1945 to the spring of 1946, the Front Royal Remount was also home to German, French and Italian POWs, many of whom were paid by the U.S. government to work on local farms. On weekends, they spent their money and leisure time downtown.

Then, in October of 1945, 152 Thoroughbreds, purebred Arabians, Anglo Arabians and nine Lippizaners, spoils of the war with Germany, were shipped to America on board the Liberty ship Stephen F. Austin. Sixty-five American soldiers volunteered to defer earlier return in order to travel with the horses. They landed in Newport News, Virginia, after 21 stormy days at sea and were transferred to the Front Royal Remount Depot. After a 90-day quarantine, on April 7, 1946, the Depot held “Lipizzaner Days,” a celebration with a Parade of Horses. By June of 1946, all of the horses had been transferred to the Pomona Remount Depot in California.

But remember, the breeding program was only part of the Remount Service’s mission; its primary purpose was to train and issue mounts and artillery horses to units fighting around the world. During both World Wars, thousands of horses arrived by train at the Front Royal Remount Depot. Area residents still remember horses being driven from the railhead to the barns at the Depot. After receiving veterinary care and training, they were sent, again by train, to Newport News to board transport ships for Europe. By the end of WWII, the need for cavalry horses had declined, but the need for mules had risen. By 1948 when the Remount was disbanded, it was raising and training mules almost exclusively. 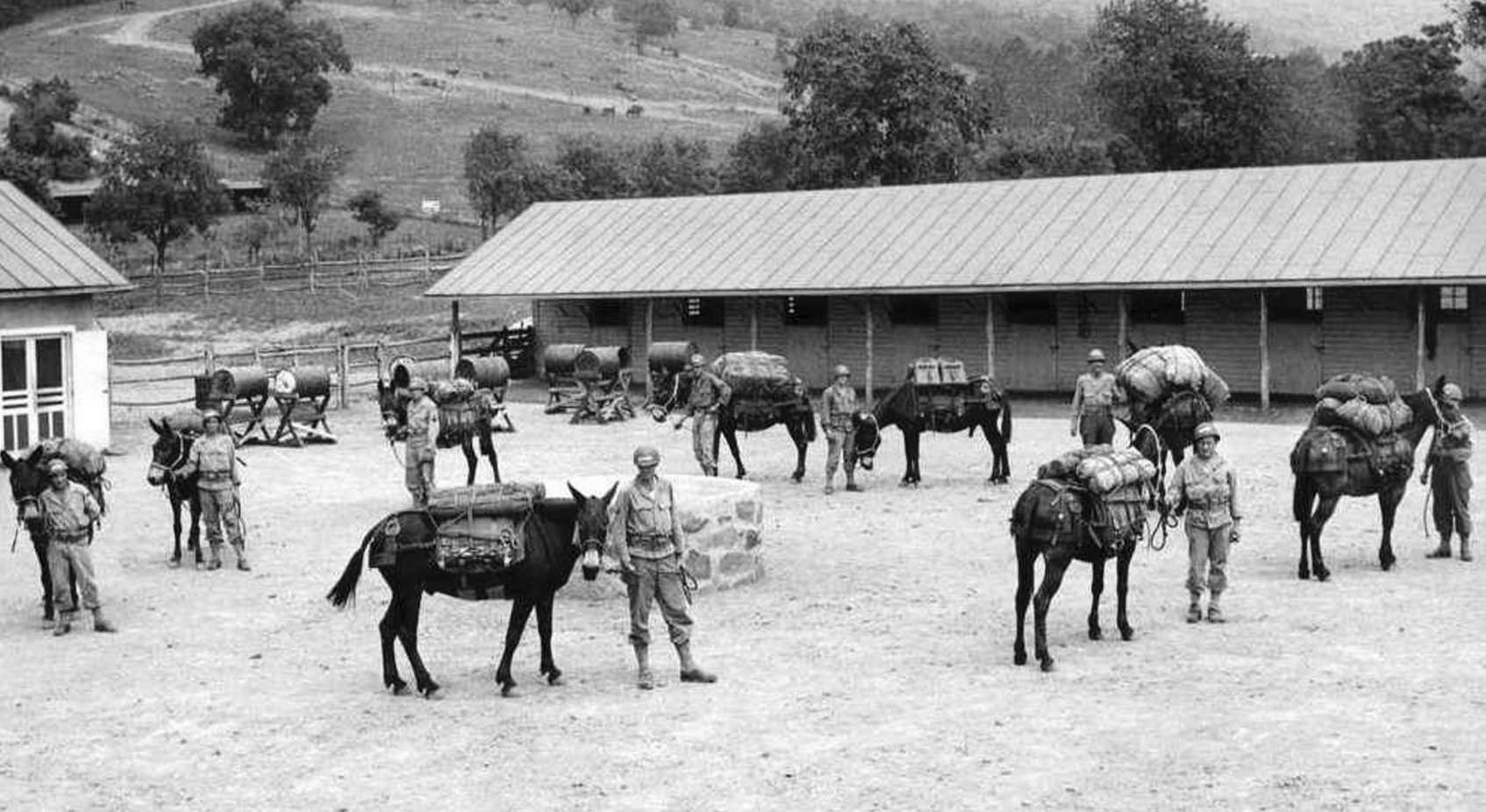 at what is now the Northern Virginia 4-H Education and Conference Center in Front Royal. Photo curtesy of the Army Signal Corps

Shenandoah National Park was the beneficiary of much of the original Remount land. Today many of the original Remount buildings are on the Smithsonian’s National Zoo and Conservation Biology Institute property. “Jenny Camp” and her sire “Gordon Russell” are buried on Race Track Hill on the Smithsonian’s property. “Old Tom,” the last Remount mule, died there at the ripe old age of 47.

The U.S. Customs and Border Control and the U.S. Department of Alcohol, Tobacco and Firearms have dog-training facilities on former Remount property, a holdover from the Army’s use of the remount during WWII for war-dog training. Families donated their pets to the war effort. The famous war dog “Chips” was stationed in Front Royal.

These historic buildings and properties of the former Remount Service are our final tribute to those many thousands of horses who rode the trains in and out of Front Royal on their way to war. ML