Then & There Working Dogs

Up until a few decades ago, working dogs included guard dogs, cart dogs and herding dogs, which became their own group in 1983 under the American Kennel Club classification. Today many of the dogs in this grouping don’t actually do very much work at all, but are kept as pets and companions. However, during the Victorian era, working dogs accomplished all of these chores and much, much more. 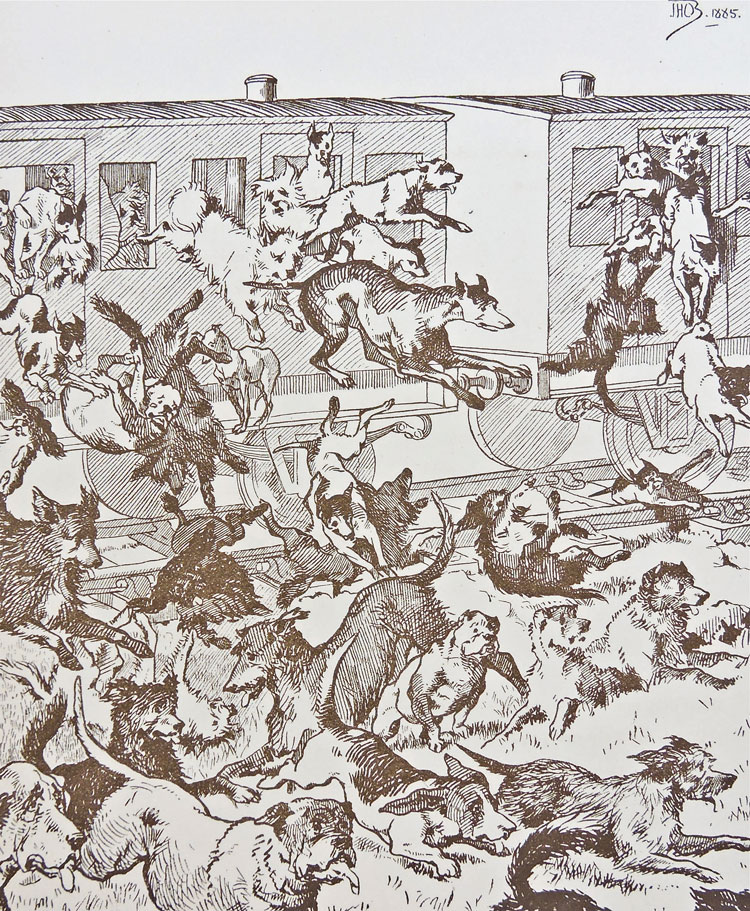 All dogs think they are sporting dogs.

It appears that there existed an entire society of dogs that delivered mail, fought fires, gave parties and operated businesses — that is, if we are to believe much that was recorded during this span of years (1837-1901) and a bit beyond. The normal occupations (pulling carts, herding, guarding, etc.) of Victorian dogs are well preserved through photographs, but the extraordinary achievements are recorded only through drawings and illustrations, which we may see in books and postcards from that time.

One can only assume that these canine geniuses and overachievers must have been camera shy. On the other hand, they frequently dressed as humans, which must have attracted attention.

Their greatest achievement, the construction of a railway, was depicted in the book “The Opening of the Line” by Ponsonby Cox, published in 1886 and illustrated by J. H. Oswald Brown. Perhaps fearing human intervention in this endeavor, the dogs did not dress as humans, but faced their task au naturel.

The idea was the inspiration of Doctor Collie, who, while watching over his flock, “pondered on the silliness of sheep,” and By watching men, and trying hard, At last he conquered speech; Then all the arts and sciences Were soon within his reach. He taught the older dogs to read And write at evening-classes; The puppies he packed off to school, Like little lads and lassies.

At length, Collie, who thought all breeds of dogs to be working dogs, set about rounding up his construction crew. Relatively speaking, they worked well together and completed their track as well as a railway station. The mood was jubilant as they began the first run and all was going smoothly until the train passed a hunt with hounds in full cry. 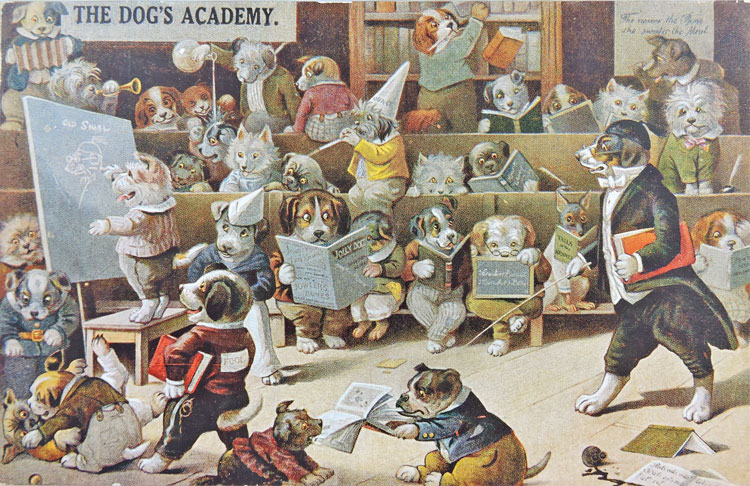 The already excited canine passengers took this opportunity to be transformed into sporting dogs and immediately exited the train through doors and windows to join in the chase. It was a howling success.

All of these canine activities begot other canine activities in support. The construction of the railway alone required planners, surveyors, mapmakers, carpenters and roofers — to name but a few. These labors, of course, created large canine appetites.

So, among the trades that occupied dogs was that of the butcher. The proprietor, no doubt, consumed much of the profits. A rather fine and fashionable butcher shop was shown in a postcard from the early 1900s and one could imagine it being sent from London and delivered by a pug to a squire in the country.

Education was of prime importance and schools for dogs flourished. Even though the illustrations of these doggie academies show them as undisciplined arenas overflowing with canine capers, they must have offered, in reality, very rigorous and demanding courses.

How else could these dogs from another era achieve what they did? ML 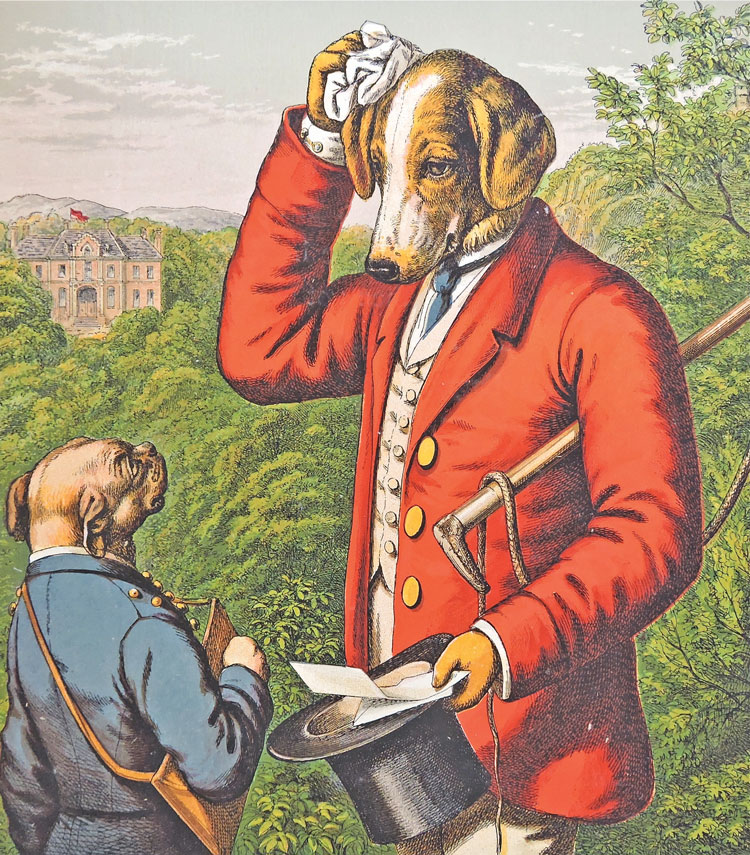 A pug delivers the mail.

Richard Hooper is an antiquarian book expert in Middleburg. He is also the creator of Chateaux de la Pooch, elegantly appointed furniture for dogs and home. He can be contacted at rhooper451@aol.com.