Story and photos by Peter Leonard-Morgan

Crossing the threshold, you may experience the sensation of having been transported to another time and place. Not because the exquisite attire on display is “Olde Worlde.” To the contrary, the shirts, trousers, suits, belts and ties are latest styles from all over the globe and of the highest quality. It is that custom-fit specialty nature, artfully placed and augmented by service from a bygone age that conjures up images of London’s Savile Row. Together with the staff’s authentic welcome, whether you’re there to buy or browse, the shop imparts warmth and comfort to the customer.

Originating with its owner, Rick Bechtold, who steers his ship with an authoritative air of calm confidence, the superior customer service extends to his capable assistants, Justin and Perry.

Rick did not always operate a high-end men’s clothing store. He has a fascinating and varied background which includes a 15-year career working with none other than the late, great Mr. Arnold Palmer, one of the world’s finest golfers ever to grace the links.  Rick seriously considered a career as a professional golfer, but the clothing business was always his first calling. One look at this dapper and impeccably turned out gent, and it is clear that tailoring to a discerning clientele was his natural métier. 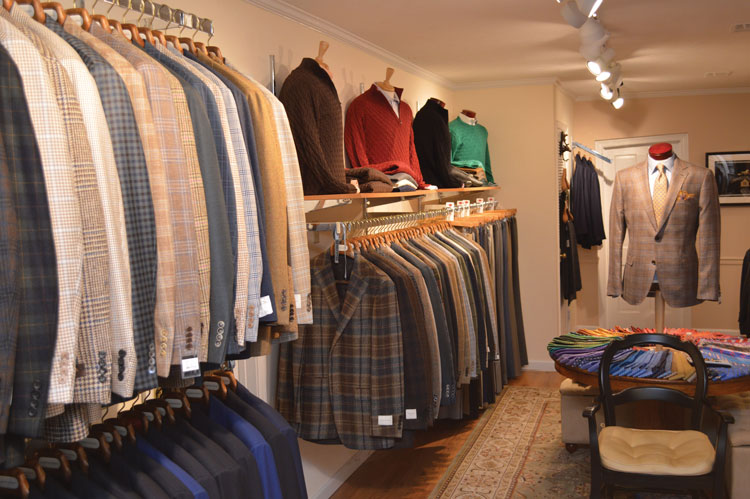 Elegant menswear for the discerning customer.

His is an inspiring American story, beginning as a sales rep selling ties and belts in 1972, and four years later being recruited by Hathaway Shirts and Christian Dior as its account sales manager. Rick knew Palmer from the time he was just a 14-year old aspiring golfing professional; in 1988, Rick received a call from the great man himself asking if he would relocate to Florida to work for him selling his line of eponymous golf-wear and equipment.

That led many years later to Ritz Carlton engaging him as their retail manager for its Golf Club and Spa in Jupiter, Florida. Still living in Florida, a chance conversation with a Ritz Carlton colleague alerted Rick to a new development in Virginia which the company would manage called Creighton Farms, and he jumped at the opportunity to relocate to Loudoun County to oversee the Creighton Farms construction and then manage its membership and retail growth. Following his retirement from Creighton Farms in 2011, Richard Allen Clothing was launched in 2012.

Richard Allen Clothing prides itself on the fact that it tailors fine clothing in a way few others can claim to do. The store maintains individual customer dossiers containing their detailed measurements, as well as their likes and dislikes in style and fit, allowing them to create impeccably tailored customized items following a quick customer drop-in or a phone call from a spouse or loved one wishing to order a special surprise gift. There exists a philosophy here of education, educating its customers as opposed to selling to them, which has resulted in repeat and referral sales being the predominant driver of business for this five-year-old establishment.

The company recently developed its own label of high quality clothing, positioned as an opening price point for its line of brands. The store was a natural development from Duchessa, Middleburg’s iconic ladies fashion shop opened in 2008 by Rick’s lovely wife, Robin Cavanagh. Duchessa stocks beautiful clothing primarily designed and manufactured in North America but with a special focus on garments made in the USA. Duchessa was the result of a strategic plan by Robin and Rick who had decided to relocate from Palm Beach, Florida, at the height of the recession. As Rick recalled, “I was convinced that we needed to move my wife’s business close to Washington D.C.,” where he believed the economy would be more resilient and recover more quickly. 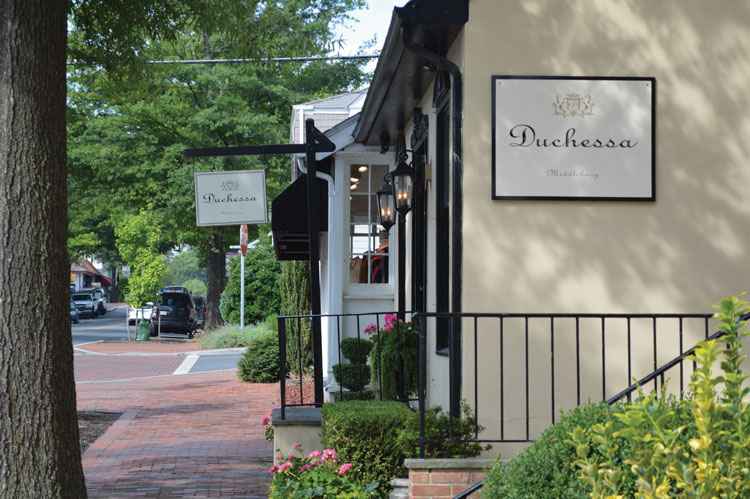 Robin’s extensive fashion background spans three decades, steeped in international design, and as a retail business owner and operator. She spent a number of years working for the French haute couture fashion house of Charles Jourdan, followed by a long venture in menswear. The first luxury menswear store opened in the early 90s on Chicago’s famed Michigan Avenue. As corporations introduced a casual dress environment, Robin saw the opportunity to expand and include the influences of ladies apparel and to serve the spouses of her gentleman shoppers. The ladies apparel collections were added in 2006. At that time Robin’s home base and operations were located in Palm Beach County, Florida, until their move north nearly 10 years ago.  While Rick got underway at Creighton Farms, Robin stayed behind until her retail lease ended, using that time to plan her next steps.

After deciding to make the historic, animal and community-friendly town of Middleburg their home, Robin opened her ladies apparel store in the hopes of establishing a business that would allow them to “enjoy a lovely life in this beautiful community.”

Just weeks after opening the business and greeting each person who had crossed her threshold, Robin put a sign on the door that said: “I’ve gone shopping for you” along with her cell phone number.  She was off to New York to find more of what her customers wanted and needed. She embraced the historic American community and chose to change her merchandising philosophy to support North American apparel designers with factories located in the United States and Canada.

“It has been rewarding to see our customers’ support of our designer collections as they too want to champion North American manufacturers and products,” said Robin.

Robin considers it an honor and a privilege to be a part of her customers’ lives.  “I am grateful that I’ve been welcomed and can do what I love, love, love!” she said.

And, she is proud that Duchessa’s is the single largest independent retailer in North America of four of the finest labels found in her shop.  Assisting her clients in building their wardrobes over time, built upon style not trends, with fresh and invigorating collections that arrive weekly, is something that never goes out of fashion.  She delights in imparting her wisdom and work ethic to her store manager Denae Russeil and her assistants, all of whom have adopted her commitment to personal service and lifetime customer relationships.  Style, quality and service are a daily practice and performed by all who are employed by Duchessa.  While shopping at Duchessa you’re sure to experience the gracious customer service, luxury apparel collections, and a world-class shopping experience in an elegant environment. 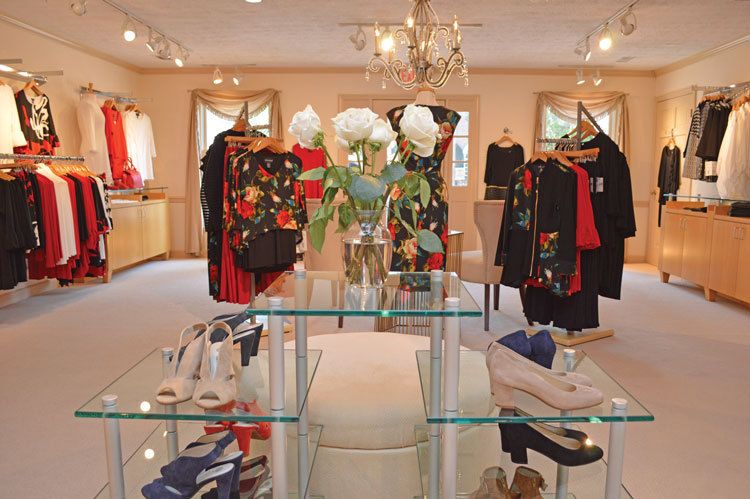 Superior goods and service await you at Duchessa.

When asked if it has been difficult as a husband-and-wife team working so closely together, Robin laughed and said, “It’s actually a relief and a blessing that I never have to explain why something else comes first. He gets it!” They make great partners, and it shows.

Philanthropy and giving back to the community are set in stone principles that they are reluctant to discuss in much detail. They donate clothes that have remained unsold for a certain length of time to persons in need, and they quietly sponsor local charitable events. Robin was acknowledged for her contributions to the community by Visit Loudoun as its Humanitarian of the Year for 2010. She is particularly conscious of the struggles experienced by returning veterans, women as much as men, and she strives to help as many women veterans to get back on their feet as she can.

Why Duchessa (Italian for duchess and pronounced Du-Kay-Sa), you may well ask? During Robin’s many buying trips to Italy, she would elegantly arrive at her various suppliers, perfectly coiffed, by chauffeur driven car, conduct her meetings, and leave the same way. One particular company’s representatives would say, each time she was departing, “Thank you, Duchessa.” Eventually, Robin asked why they repeatedly called her Duchessa, to which they replied that they had never met anyone more suited to be La Duchessa!

Even the least observant of us cannot fail to notice each time we pass Duchessa’s window that what was there a few days ago has been replaced with something new. Nothing stays around for long in either Duchessa or Richard Allen Clothing. Because they constantly refresh their windows and stock with quality merchandise, and most of all, through their warm and sincerely gracious personal service, you’ll want to make this a frequent part of your shopping experience. ML