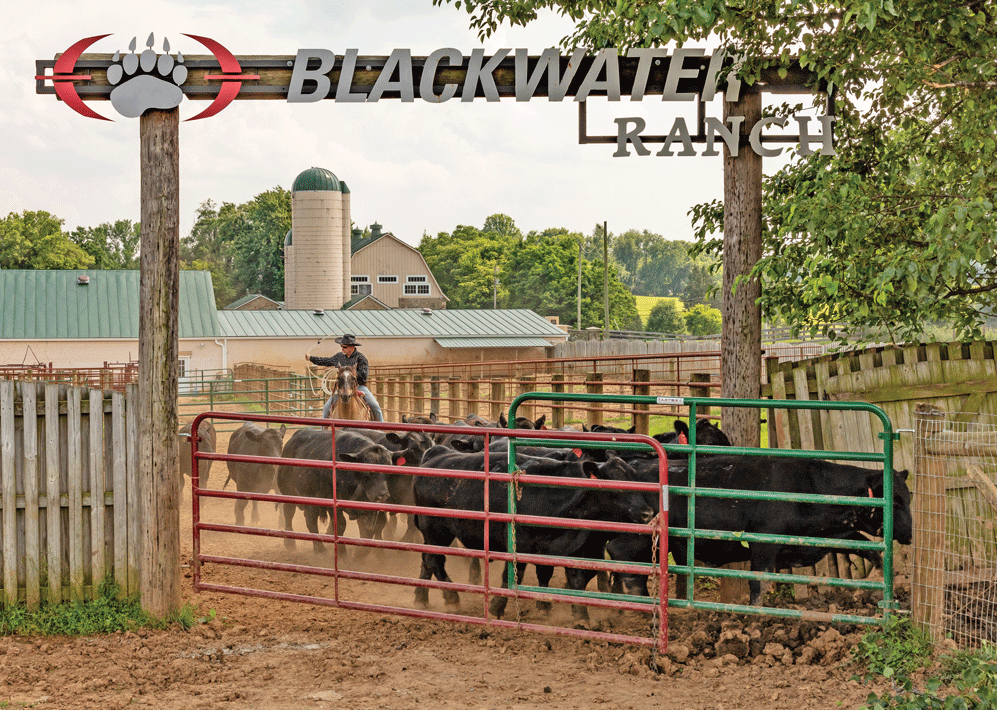 Brett Miller loves what he does and does it well. Photo by Tony Gibson

Brett Miller grew up in Cody, Wyoming, often called the rodeo capital of the world. Although he lived in town, all his relatives had nearby ranches, and that is where he spent his time developing a keen interest in livestock and the ranching lifestyle.  With season tickets to the rodeo located only blocks away, he also imagined becoming a professional bull rider.

“I was a rodeo rider on bulls from age 15 through high school. But, not a very good one,” Miller says with a laugh. “I never made it anywhere, but it was fun, and I never got hurt.”

Next up was college, where he quickly realized that he wasn’t going to be able to afford medical school, so he switched to a business degree, working his way through college at ranches for the most part.

The way Miller recounted these stories, you immediately could tell a few things about him. He’s honest, to the point, and sees the world clearly through a frame colored only by his love of the land, an acute business sense and a commitment to do what’s right on a personal and professional level.

“I was still working on the same ranch part-time after school, but I entered the building industry as a carpenter. Those skills have come in handy over the years and in many ways,” he said.

The most significant opportunity to put those skills to use was being hired by Ed and Elsa Prince to help build their dream retreat, the Double E Ranch, in Cody, from the ground up. The process was to take five years, but Ed, who’d had a highly successful business career, never got to realize his dream, passing away from a heart attack before project completion.

Miller stayed on to work directly for Elsa Prince maintaining and managing the ranch for another eight years. The very first house built at Double E was for the Prince’s son, Erik, who was in SEAL training at the time.

The Move To Virginia:

Fast-forward to 2007, and Erik Prince was living in McLean, Virginia, and spending time on his Middleburg property, Blackwater Ranch, designed as a family retreat just as his parent’s home in Cody had been originally. A local farmer was utilizing the land to grow corn and soybean crops, but the potential for the ranch was far from being realized. All that was about to change.

Prince asked Miller to relocate to Middleburg and to manage a series of his properties around the country. The timing and the opportunity worked out perfectly for Miller and allowed him to continue working on behalf of a family he obviously admires.

“Erik and his wonderful, wonderful, wife Stacy, the whole family really trickling down from his Dad and Mom are tremendously capable and very generous and kind. They are more charitable in giving back than you could ever imagine,” said Miller. “Right now, Erik has a company in Africa building infrastructure there, trying to get water to communities to better the lives of the human race in some of the most challenging areas of the world. I have the utmost respect for him and his family.”

Miller had settled into his new role working for Prince when one day in 2010 they both found themselves home with the flu, talking on the phone about the possibility of adding cows to Blackwater Ranch.

“The land wasn’t being taken care of and maximized to its full potential, so we started by purchasing a diversified herd to see which breed we might want to focus upon,” shared Miller. “After four years, we decided to go with purebred Black Angus. The American Angus Association has developed so much helpful information and support for breeders.  We now have the ability to see into the future, because the genetics tells you pretty much the animal that you are going to get, so the breeding process is more controlled and predictable.”

So, they sold off the diversified herd and purchased purebred Black Angus, almost exclusively sourced from Whitestone Farm in Aldie, a registered breeder. Miller explained, “You can work to have a registered herd and sell them, or you can raise some really good beef. We’re still highly involved in breeding for ourselves, but not for raising to sell as breeding stock.”

There are no shortcuts to handling the herds with care. Photo by Tony Gibson

The full story of Blackwater Beef goes back to solving a series of problems that Miller and Prince identified in the ability of beef-lovers to purchase the quantity and quality of beef to suit their needs without the hassles of trying to put together two or more individuals to share orders. Miller said, “The company’s initial focus was on solving the problem of providing the average person the ability to obtain farm-fresh beef.

“We wanted beef that consistently tastes delicious,” he added, “so our animals are grass and grain fed and then grain-finished to get that beautiful marbling that provides superior flavor.” The flavor is from the grain.

“Our biggest challenge is the education process,” said Miller. “There’s a lack of clarity sometimes in purchasing beef. Is it live weight; is it rail weight; is it finished weight? How do you find, purchase, have delivered and store the proper amount of beef at the right price?”

The subscription solution Blackwater Beef offers is simple and a good value.  “You make a monthly payment throughout the year and receive a portion of your purchase quarterly, whether it’s a quarter beef, half a beef, etc., delivered to your door. We approach each sale and transaction with the mentality of under-promising and over-delivering,” said Miller. “With an average price of $10 per pound finished product, we’re extremely competitive price-wise, and with a growing line of specialty products as well.” Since their retail launch in February, Blackwater Beef has received a very strong reception in the marketplace.

“For Father’s Day, we came up with a gift box very similar to Omaha Steaks that did really well at a significant cost savings in comparison, and with our own branded sauce included,” he said.

Miller is the heart and soul behind product development. His wife, Emily, is a source of excellent support and advice on Brett’s marketing efforts as she has her own experience in these areas.

With a hint of pride in his voice, Miller stated, “The beauty of this system is we’re always turning over fresh product. Nobody else in the industry includes value-added products like beef sticks and jerky in a quarter beef subscription that I am aware of. The packaging is good for a year in the freezer as long as the seal is not broken, and you’re getting fresh beef delivered four times a year. It’s not the same exact animal, but it’s all the same Black Angus from the same source with consistent quality.” 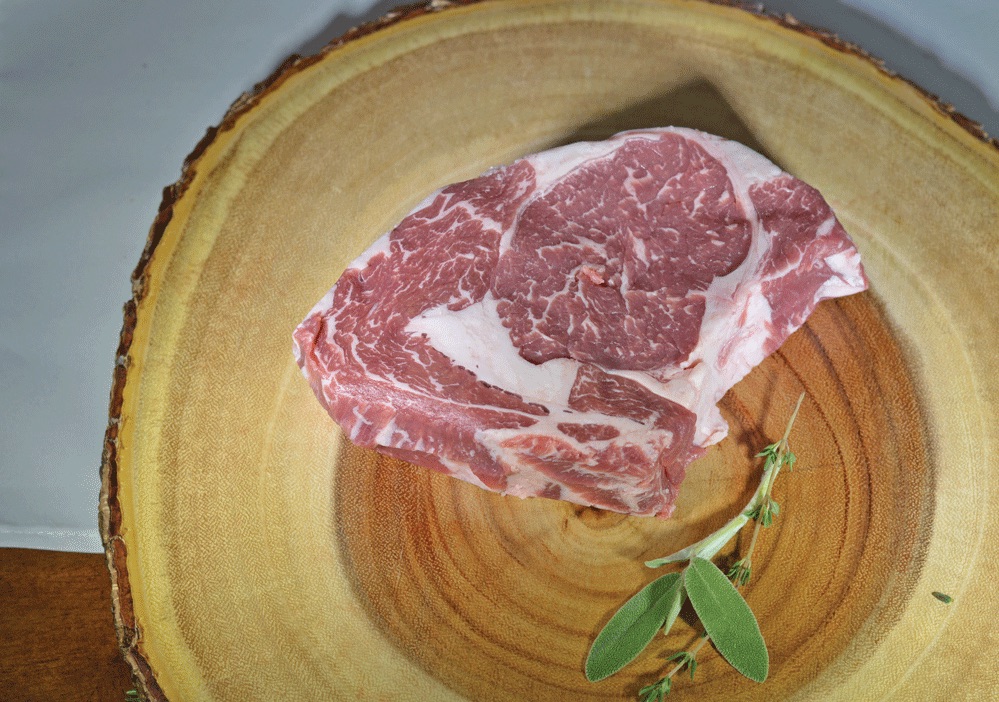 The diets include grass and grains to produce the rich marbling that produces consistently more flavorful, fresh beef. Photo courtesy of Blackwater Beef

Blackwater Ranch has room for only about 100 head of cattle, but they have access to up to 400. “We utilize co-producers. We take the animals when ready to our co-producer in Staunton to finish them up,” Miller said. “We have great local business partners in Whitestone Farm, Middleburg Millworks for supplies, the Exxon and auto-parts store, and the Culpepper Co-op (CFC) in Marshall where their grain is sourced.”

The subscription business is up and running, and Blackwater is building out its strategy for the future. “For years, we did all the research to build a beef jerky company because at Christmas I made jerky for everyone. We found so much competition and little margin, but we wanted to make it anyway,” said Miller. “Working with two processors, they have come up with beef sticks and jerky with enormous interest from consumers, which created another leg of the business.  Another income stream will be a vending food truck business and a wayside stand at their location on Foxcroft Road in Middleburg.  They have recently started selling at the Middleburg Farmer’s Market from 8 a.m. until noon on Saturdays in the interim. Long-term may be a steakhouse restaurant.”

Miller recently went to Sturgis, South Dakota, where Blackwater products received tremendous interest and will be featured at the largest saloon there, One-Eyed Jack, for the entire six-week season, with 500,000 people expected the week of the famous motorcycle rally, August 3-12.

“We’ll be providing the private reserve steaks, burgers and all their beef products, giving me a chance to get in-depth knowledge about the restaurant-retail side of the business,” Miller said.

“We’ve actually solved some of the problem with beef, because the restaurants only wanted prime cuts. By doing the beef sticks and jerky, burgers, steaks for the steakhouse, the whole animal is used to its best purpose. There’s no waste and all the flavor,” said Miller.

Blackwater has committed itself to making the land healthier and better then when they started. When you commercialize a product, you need a certain volume. If that product comes from the land, you have to take care of the land and put back in the nutrients or the product suffers. In Miller’s words, “We’re building a going concern for this family that could continue on with someone in the next generation.  This family wants to be good stewards of the land and have something for posterity. I’ve been with them for over 20 years, and they care and do things right.”

Clearly, so does Brett Miller. ML

This story was originially published in Middleburg Life’s July 2018 issue.

How to Build a Home with Timothy Clites