As a young child, Page Allen moved with her family to Middleburg and has been a part of the community off and on ever since. She and her sister Betsy Allen Davis went to The Hill School, their mother Nancy Lee Allen started The Fun Shop and her father Howard Allen set up a photography business, renowned for having captured Jackie Kennedy on horseback.

Page attended Mary Washington College after graduating from all-girls St. Margaret’s School in Tappahannock, Virginia. However, she decided to pursue the horse business after, when on her way to a Janis Joplin concert, she was in a serious car accident that laid her up for six months and changed her perspective on her future. Riding and teaching were her loves, so she decided to attend a program to become certified in riding instruction.

When she moved to Clifton, her family’s home in Berryville, after spending a couple of years in Richmond, she opened and ran a Winchester version of The Fun Shop, called More Fun. She has been at the Middleburg store since 1993 where she and her sister Betsy now run the family business together. 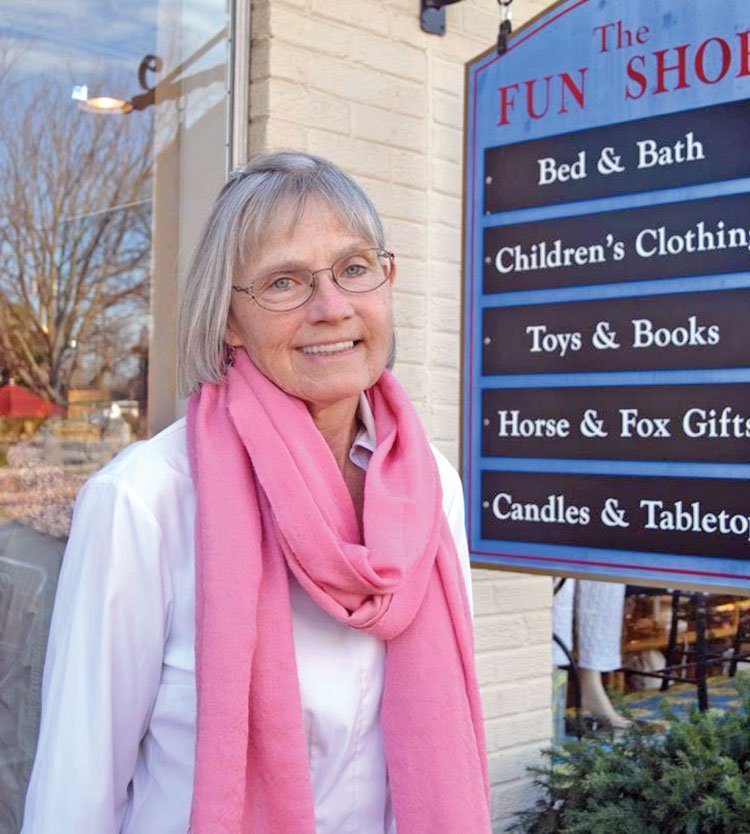 Managing to keep her hands in the horse business her whole life, she now boards horses at her home in Boyce, Virginia.

The year 2015 was a tough year for Page, having lost first her mother from a stroke, and four months later her father from heart failure. Following that difficult year came a year of traveling opportunities Page never thought she would have experienced.

First, she spent a week in Palm Springs, California, at the BNP Paribas tennis tournament where she was “the biggest groupie — there all day getting autographs.” Next, she was invited to Ireland by a friend. She spent 10 days there, celebrated her 65th birthday and enjoyed the beautiful and wild country and its people. Lastly, she traveled to England with a group of cousins and hiked 192 miles in 17 days on the famed Coast to Coast Walk.

When Page isn’t at The Fun Shop, she enjoys playing tennis; “It keeps me out of trouble.” She currently is both singles and doubles champion at Millwood Country Club in Boyce. “To be honest, there weren’t that many people I had to beat. Maybe two. It’s a small club,” she allowed, but the truth is she is a darn good tennis player.

Finding time to align schedules with her daughter Whitney, a field-hockey coach at Holton-Arms School in Bethesda, Maryland, is not always easy, but they manage to meet up for dinner regularly, get away in the summer and spend holidays together.

Since she was a child, Page’s energy has been boundless. “I was always busy, busy, busy. I couldn’t sit still then and I still can’t,” said Page. “It’s just harder now to do 15 things at a time.” ML