Sunday afternoon at 2 p.m., in a field somewhere in Clarke County, you might have seen a group of people wearing white breeches and green coats. What were they doing?

Where, you might have asked, were the horses? There were none, you had found the Nantucket-Treweryn Beagles (NTB), Clarke County’s only foot pack of beagles. 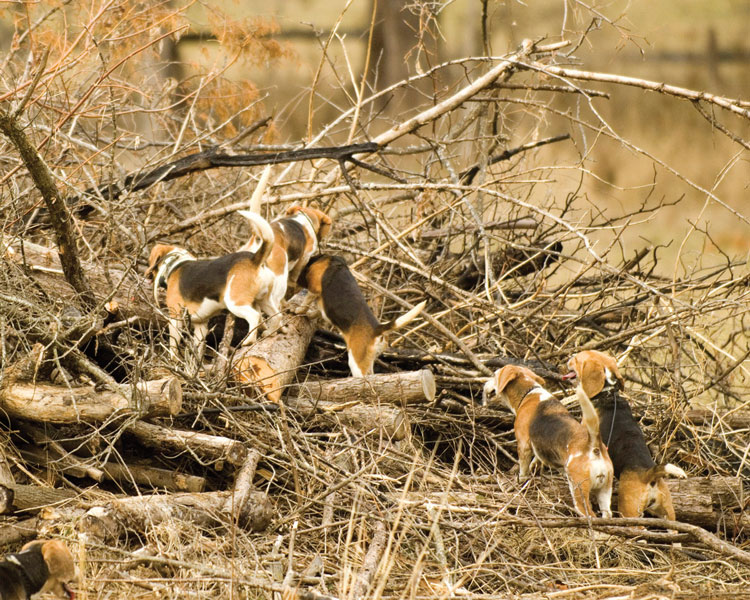 Beagles checking a covert for rabbits.

The beagles meet formally every Sunday from November through April, hunting rabbit across Clarke County, occasionally venturing into Pennsylvania, Maryland, and sometimes meeting in Aldie at the National Beagle Club. The pack operates just like a foxhunt, led by masters of beagles, hunted by a huntsman, assisted by whippers-in, and followed by a field of subscribers headed by a field-master.

The main differences are that the NTB hunts rabbit, and the hunt staff and followers are on foot rather than mounted. The uniform is comfortable shoes and weather appropriate clothing rather than hunt appointments. Finally, instead of going home to wash and feed a horse and clean tack, the followers are usually invited to tea provided by the hosting landowner, or to a tailgate tea provided by the masters.

The pack originated as the Treweryn Beagles, organized in 1924, and hunted the same country as the Radnor Hunt in Philadelphia’s Main Line area. For a much of its history, David B. Sharp Jr. was master of the Treweryn. 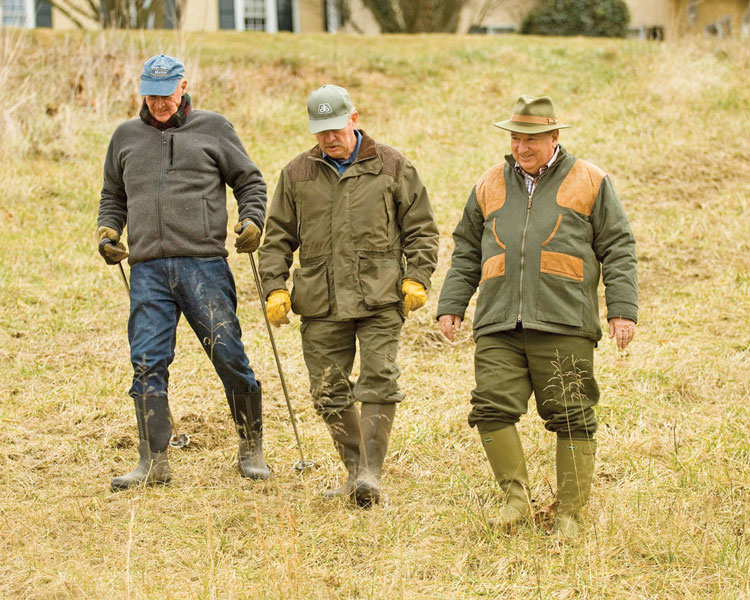 In 1955 Sharp and Trimpi married, and after hunting their packs separately for 9 seasons, they merged in 1964, forming the Nantucket-Treweryn Beagles. In 1970 they moved to Middleburg, Virginia, and hunted together for many years before becoming legendary figures in American beagling. As evidence of their fame, they were the only Americans ever invited to judge beagles at the prestigious Peterborough Hound Show in England.

In 1982, the pack moved to Clarke County, where it has continued to hunt rabbit as a subscription pack to this day. The current masters of beagles are Peter J. Cook (1987), Frederic B. Underwood (1993), Marianne Casey (2013) and Russell Wagner (2013). Wagner also served as huntsman while the other masters served as whippers-in, and field masters. William Getchell of Winchester served as an honorary whipper-in.

On Sunday, the hounds met at 2 p.m. on one of several farms in Clarke County. The huntsman was first to arrive, and while the hounds waited in the trailer, he greeted the landowner, walked the coverts and planned the day’s hunt. The staff and field arrived between 1:30 and 1:59 p.m. and despite having no stirrups, partook in the stirrup cup while the huntsman readied the hounds. At 2 p.m., the huntsman explained his plan and moved off to the first covert. 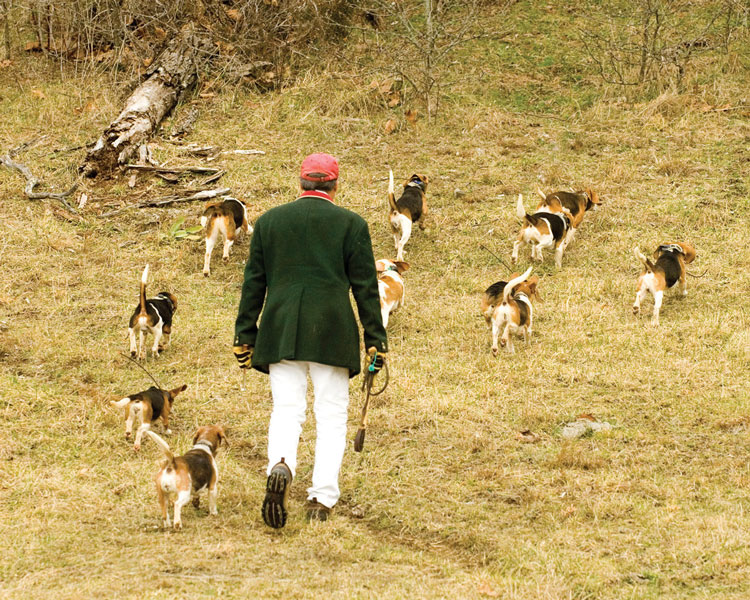 Russ Wagner, Master and Huntsman of the Nantucket Treweryn Beagles.

Once released to hunt, the beagles were all business and raced into the coverts to find their quarry. When they found the quarry, the music of the chase began. First the strike hound, then the full cry of the pack could be heard as the rabbit left cover to race for safety. The field master moved the field along, just behind but close enough to see what was happening as the hunt unfolded.

Normally the rabbit would run in a large loop trying to escape the chase without leaving the country it knows. The hounds followed by scent, rarely lost the line for more than a few seconds.

When the rabbit tired, or the hounds got too close, it would put on a final burst of speed and run to a hole where the chase ended, the quarry being ‘accounted for.’ The huntsman caught up, blew the ‘Gone to Ground’ and after he praised the hounds, moved on to find the next rabbit.

After hounds, huntsman, staff and the field had done enough for the day, the entire hunt returned to the meet to discuss the day over wine, tea, snacks and sometimes a full meal.

If you would like to try beagling, you could contact the Masters of the NTB through their website, ntbeagles.org, or you could call them at 540-955-2889. If you don’t reach them, leave a message as they are out with the hounds and will get back to you when the quarry goes to ground. ML