Sure, you can take your meager mutt into Amanda’s Regal Canine and Amanda Zeller will groom your pup into supreme handsomeness, but she’s also eminently qualified to spruce up your purebred to show-quality perfection.

Amanda is one of 10 members on Groom Team USA, a group of groomers considered the very best in the country, having competed their way into the prestigious clutch. In only her third competition, Amanda scored “Best in Show” honors at one of the biggest shows on the East Coast.

Grooming contests, like dog shows, exist throughout the year all over the country and Amanda is hooked on the competition. She now spends the bulk of her free time practicing for and attending grooming shows to keep her place in the top 10 with hopes of making the top five, a distinction that could send her to international competitions.

On a Sunday, Amanda can sometimes be found grooming her own three dogs, Bre the St. Bernard, Miles the Airedale terrier and Dude, the English springer spaniel, who demand a myriad of grooming styles and skills. They are beautiful specimens of their various breeds, but “they’re also my kids,” said Amanda.

“I’m grateful for the risks I have taken. When you step outside of the box, luck and talent will get you places.”
-Amanda

It wasn’t always dogs. Like many young girls, Amanda had horses in her blood. “I grew up wanting to be a cowgirl,” she said.

But her parents had other ideas: “Go to college and you will always have it to fall back on.” Amanda tried that route and attended community college, but it wasn’t for her. So she eschewed traditional college and pursued a more specific education in equine studies at Meredith Manor International Equestrian College in West Virginia, where she took a special interest in equine massage.

After putting in some time working on horse farms, Amanda switched career paths.

Amanda, who also had a fondness for dogs, found herself in a PetSmart one day with her St. Bernard in tow when the manager asked if Bre could do any tricks. Bre could and so the manager then, of course, offered Amanda a job in dog training.

Admittedly unqualified and surprised at the offer, she took the job because at the time she was in need of one. When things were slow, Amanda found herself in their grooming facility filling in as needed.

“I loved the instant gratification of seeing the owners’ smiles when they picked up their dogs,” said Amanda. Soon, she went looking for a job that would give her better training and more exposure to grooming show dogs.

That job search brought her to Loudoun County and a well-known show groomer, who happened to be in a sling and in immediate need of help. Instant hands-on experience catapulted her into the field of grooming show dogs.

Always on the hunt for experience and competition, Amanda once participated in a Rescue Rodeo Grooming Competition in Atlanta where 40 homeless dogs, some that had not ever been groomed and rarely, if ever, handled, were groomed until they smelled and looked great, to varying degrees depending on their natural attributes. “Good grooming definitely helps adopt dogs,” said Amanda of the event. 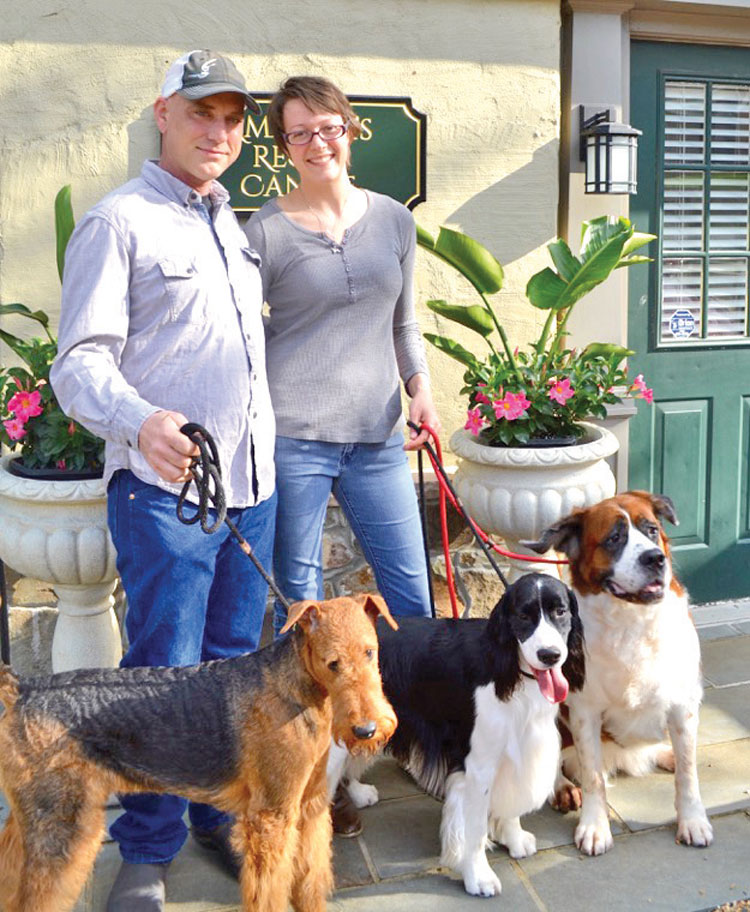 Though she opened Amanda’s Regal Canine only a year ago, Amanda has been spiffing up our community of canines for four years now. She first gained her devoted clientele at The Studio in Middleburg until it closed, before opening up her own shop at 105 W. Marshall St.

“I love it here,” she said. “I’ve always wanted to end up in Middleburg.”

Having worked with horses in the area several years ago, Amanda knew she’d like to return someday. And so she did, with her husband Ryan Stehlik, who trains polo ponies at Llangollen Farm and rides the green ones before the pros take them onto the field. They live on beautiful, historic Llangollen outside of Upperville, a convenient location for visiting the many breweries and brewpubs of western Loudoun County, one of the couple’s favorite pastimes.

Though only 29, Amanda knows she’s in the right place doing the right thing: Middleburg and dog grooming, a magical concoction.

“I’m grateful for the risks I have taken. When you step outside of the box, luck and talent will get you places,” she said, then added, “And my parents couldn’t be more proud.” ML