“She had been boiled down to a good, strong broth.” This quote in Sue Monk Kidd’s novel, The Invention of Wings, speaks about a long, challenging life rendering the character into something good and hearty and savory. Such is Ann MacLeod.

Ann MacLeod defies nearly every stereotype about the elderly: She is active, clever and totally with it. (There is that little thing about her driving, though.) Her 96-year-old mind and 4’ 11” frame seem to have skipped a couple of decades as though the thief that is age has stolen neither a step nor a wit from her, though she allows her hearing is not what it used to be. Springing out of a chair, she walks briskly across the room to answer the phone or fetch something from her office. Her conversation is quick and intelligent, her memory nearly perfect and she laughs often-a rich, warm trill. 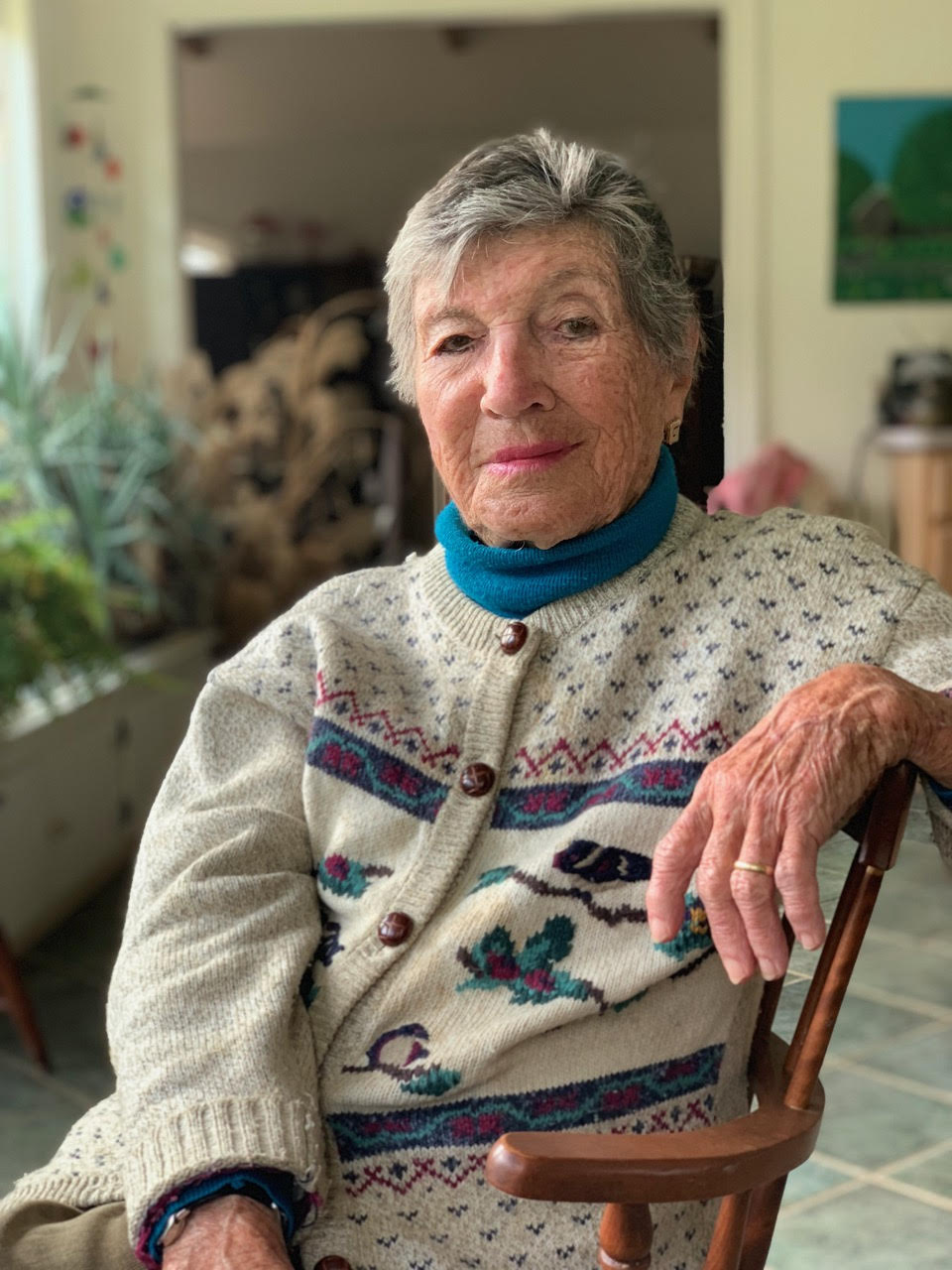 Some say, “I want to be like Ann when I’m her age,” but the more enlightened say, “I want to be like Ann now.” Ann sits in a straight-back wooden chair in her sunroom surrounded by potted plants and the narcissi she is forcing for winter blooms. Kappa Alpha Theta (KAT), the cat her friend Lenny Hale found, took to the vet, then presented her with some seven years ago, mews and rubs up against her as Ann gently swats it away. Dressed in a wool, button-down sweater adorned with birds, a la L.L. Bean, she watches intently for the real thing through the plate glass windows into her backyard. “Look, two male cardinals,” the nature lover says, not mentioning the two common Blue Jays and two nameless brown birds sharing the bush. Ann finds what is good and interesting and filters out the rest. It is this paring things down to what is most essential and pleasing that seems to have accentuated her long, full life. The power of positive thinking is no new psychology to her.

She doesn’t watch the news on television, but instead reads the Washington Post “cover to cover” upon rising at 6 a.m., and has no interest in the media’s clamoring of the day’s news. “By the time I read the paper, it’s history. I don’t get all agitated.” 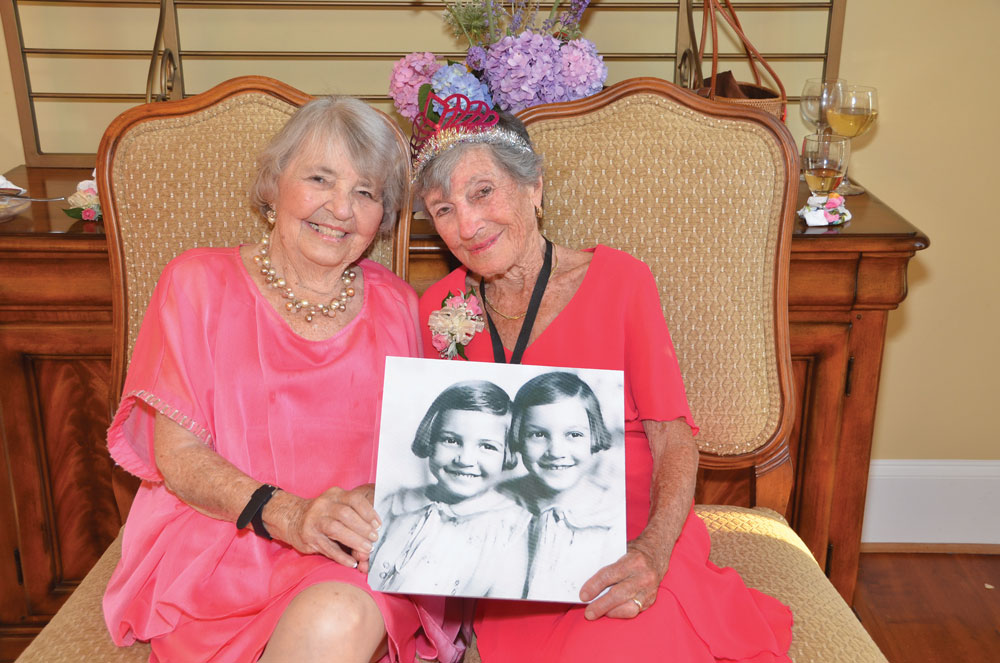 Ann MacLeod and her late sister, Kit, were so close in age that people thought they were twins. To commemorate dressing alike growing up, the pair wore similar outfits for the 95th Birthday Bash that Beth Ann Mascatello threw for Ann in 2017. Kit passed away later that year. Photo by Nancy Milburn Kleck Photography.

That’s not to say she doesn’t care about what’s going on in the world, she just doesn’t see the point in drowning in it. Putting her beliefs to feet, the stalwart lawn-sign Democrat has attended political marches in Washington, D.C., notably a recent protest for gun control and the Mothers Marching for Peace march during the Vietnam War. Ann devours books both for pleasure and for a deeper understanding of ideas and events. Over the holidays she reread for the third time the 1037-page tomb, Gone with the Wind, then chased it with several other books since.

Images of Ann’s late husband, Sandy, are throughout her home, on the walls and on tabletops, photos of horse racing and winners’ circles, family photos on the farm and of time spent on their boat, Dunvegan. She is surrounded by memories galore. A sign, Sandy McLeod Memorial Parkway, greets visitors to the farm. When she realized it was their 62nd anniversary one day recently, she smiled and clasped her hand to her chest. They were the best of friends and partners.

Growing up in Staunton, Virginia in the shadow of Staunton Military Academy, hearing Reveille each morning and Taps at night, Ann fondly remembers the pomp and circumstance of the military atmosphere. Upon graduating with a degree in political science from her hometown college, Mary Baldwin, she wanted to serve in the Red Cross. As soon as she was old enough to join and go overseas, she found herself in Europe serving donuts and coffee to the World War II troops. 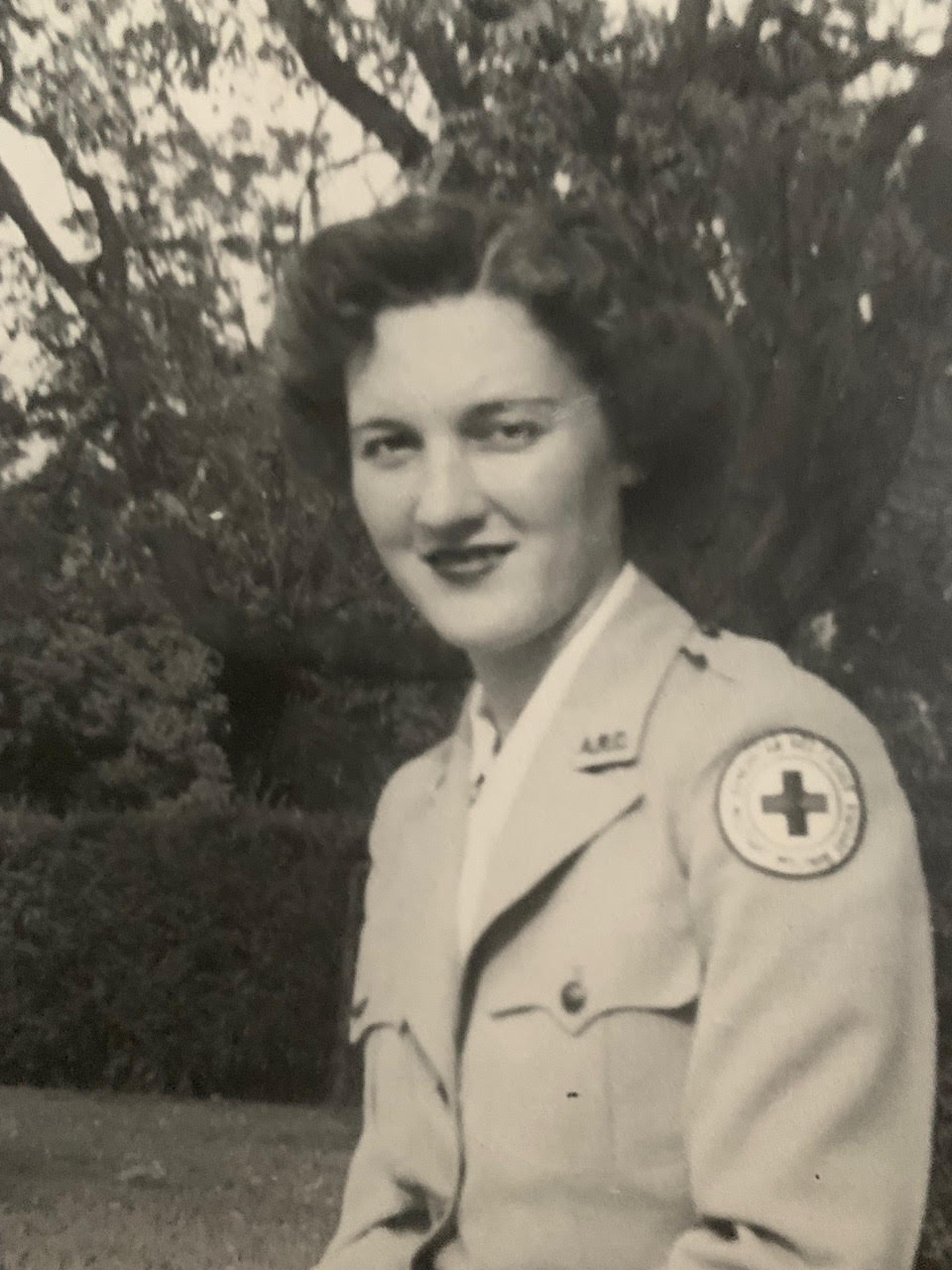 After her Red Cross duty and many adventures, Ann returned to Europe and quickly landed a job in Salzburg, Austria writing for G-2, the intelligence arm of the United States military in Austria. “I had such a good time,” recalls Ann, “I went skiing every weekend.” Ann’s early love affair with skiing has stayed with her for her whole life, seducing her to a few of the best slopes in the world: Austria, Switzerland, Aspen, Vail and even Bryce, Virginia, where she still skis.

In her mid-30s, she returned to the States and moved to Washington to work for the CIA writing reports. She was invited out to Upperville for a dinner party by a friend when she was introduced to her future husband, Colin “Sandy” MacLeod. When the hosts of the party became too inebriated to finish preparing the meal, Ann and Sandy hit the kitchen together and cooked and served dinner. Three months later they were married. “I had three possibilities: a job offer in Singapore, one in Aspen where I could ski, or I could get married.” 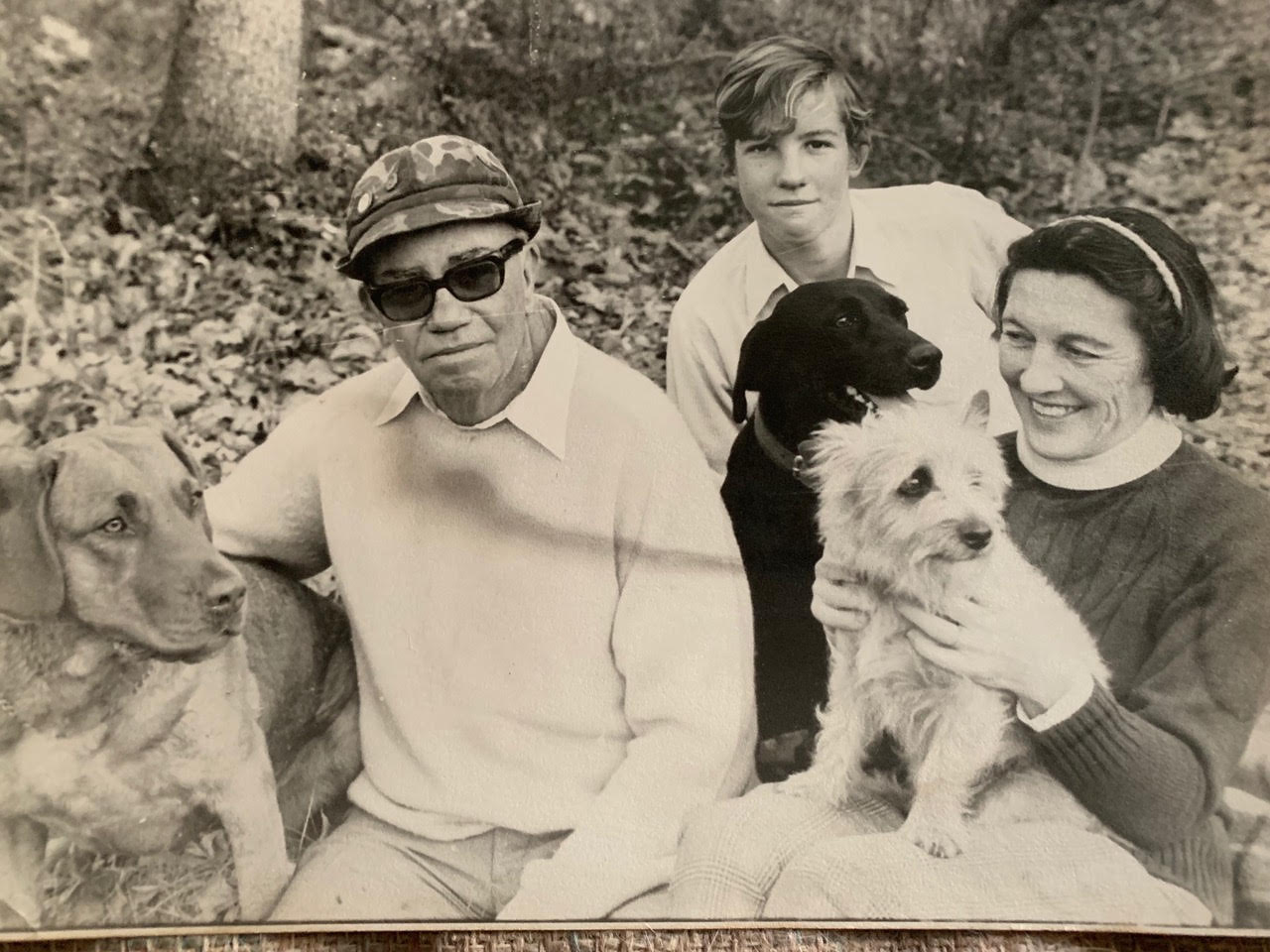 Ann’s new husband was a Thoroughbred owner and trainer. She jumped in to help with the books and went with him to the track every morning. Their home base was Sandy’s family place, Dunvegan Farm in Upperville, but they lived mostly where the tracks were.

While living in New York for the racing season the couple lived aboard their renovated 60-foot houseboat that Ann transformed into a summer cottage. They anchored in Long Island for the season then puttered up the Hudson, always with a friend or two in tow, for August in Saratoga Springs, New York—one of Ann’s favorite places. Ann continues to spend at least a couple of weeks in the summer haven each year, on land since the days of Dunvegan, the boat, are past.

Today Ann, a widow of 41 years, lives on 13 acres carved from the original farm where she built a replica of the home that Sandy had built next door when they first were married. Living with her are son, Colin, and grandson, James when he’s not at school at Davidson College in North Carolina, where he is on full scholarship.

Every week Ann volunteers in the community through various non-profit organizations and church. She cooks and serves for SOME, So Others May Eat, a Washington-based mission that feeds hundreds of homeless men, women and children every day.

About 30 years ago, Ann decided that Trinity Church should take up SOME as one of their outreach programs and pressed until it became a reality. “She’s a woman of tremendous passion,” says longtime friend Jonathan Miller. “When she takes on a cause, it is with the ferocity of a Jack Russel on steroids.”  Trinity Church has faithfully supported SOME ever since. 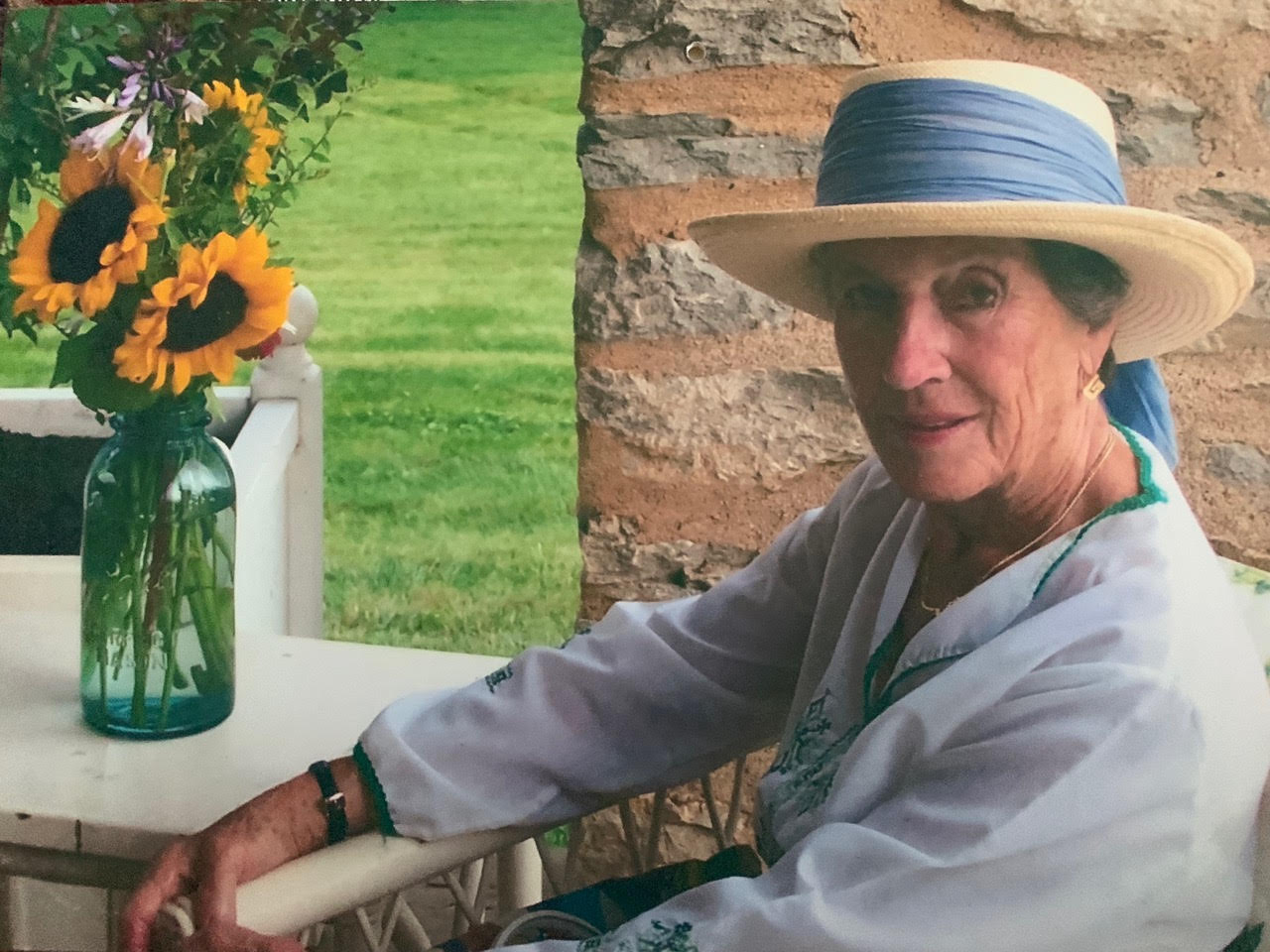 The Goose Creek Bridge and site of the Civil War Battle of Upperville still stand thanks to Ann. When the historic bridge was in disrepair and rumored to be taken down or left to ruin, Ann lobbied the Virginia House of Representatives and enlisted the Fauquier and Loudoun Garden Club to raise funds and awareness to insure its restoration and conservation. Recently, the Civil War Battlefield and bridge were turned over to Northern Virginia Parks to be preserved in perpetuity.

Ann volunteers monthly for Middleburg FISH, a nonprofit run through Middleburg’s Emmanuel Episcopal Church. She answers calls and helps process requests for assistance through the organization of which she is also a board member. This year’s honorary chair of the Windy Hill Foundation Gala, also spends time helping the Windy Hill children in the after- school tutoring program, Study Buddies.

Interspersed in her life are her semi-weekly church services, weekly hair appointments and all the social engagements she can fit in. “She’s always looking to know what’s going on in the social scene,” says friend Betsy Crenshaw. 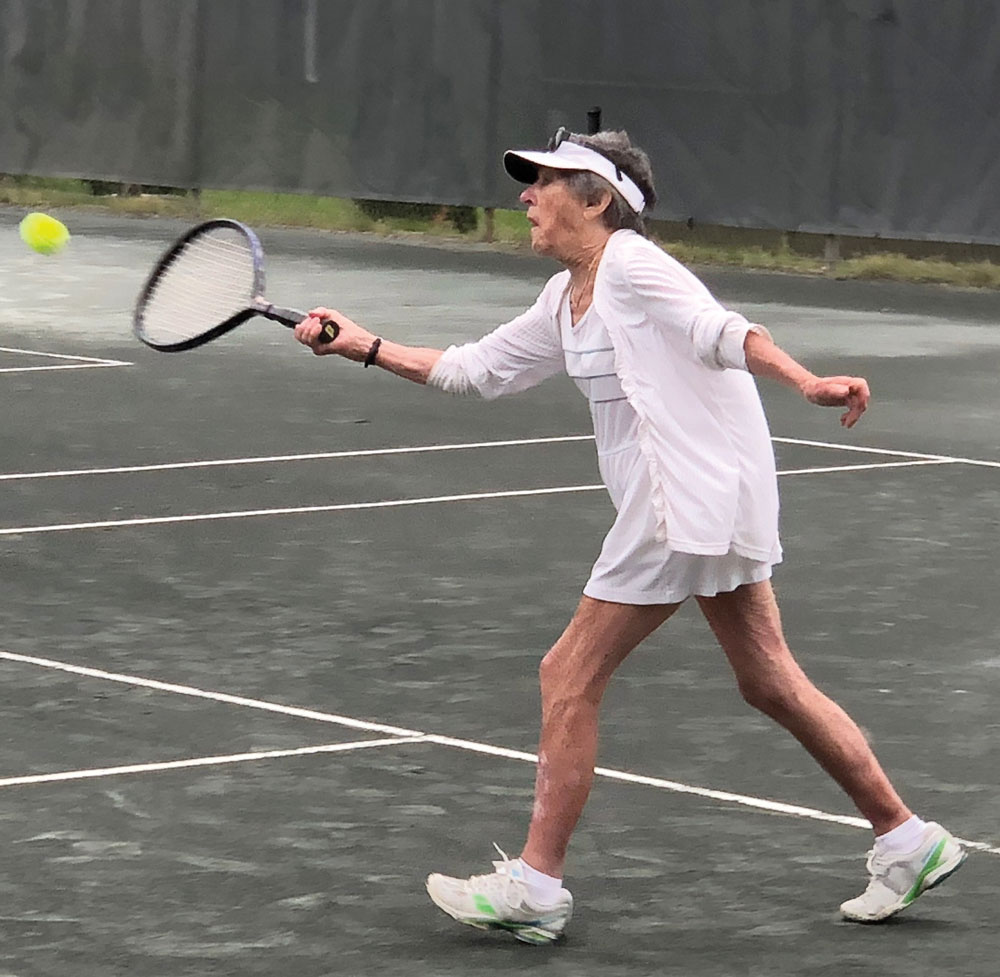 Three times a week the nonagenarian shows up to the Middleburg Tennis Club in her vintage tennis outfit for one of her cherished regular doubles matches, and often fills in for another game or two each week. “I love it—I grew up playing tennis—but I’m not a great player,” she says. “I’m mediocre.” She is better than she lets on. Always a threat in the club’s Calcutta tournament, Ann employs her perfect lob or unfailing angle volley off the court that not even a pro can touch.

A club sportsmanship award is named after her, the player who is always positive and shuns poor tennis etiquette—a frustration or error elicits a “Bother” from Ann rather than the curse words uttered by some. “You watch your language when you’re on the court with Ann,” advises one of her regular partners.

It’s the way she was brought up: the good manners and positive attitude. “If you don’t have something nice to say about something, keep your mouth shut,” her parents told her. And don’t gossip or speak ill of others. Be friendly. “Enjoy life without being so sulky all the time,” adds Ann. Around every corner of conversation with Ann comes a revelation of sorts. One story leads to another. 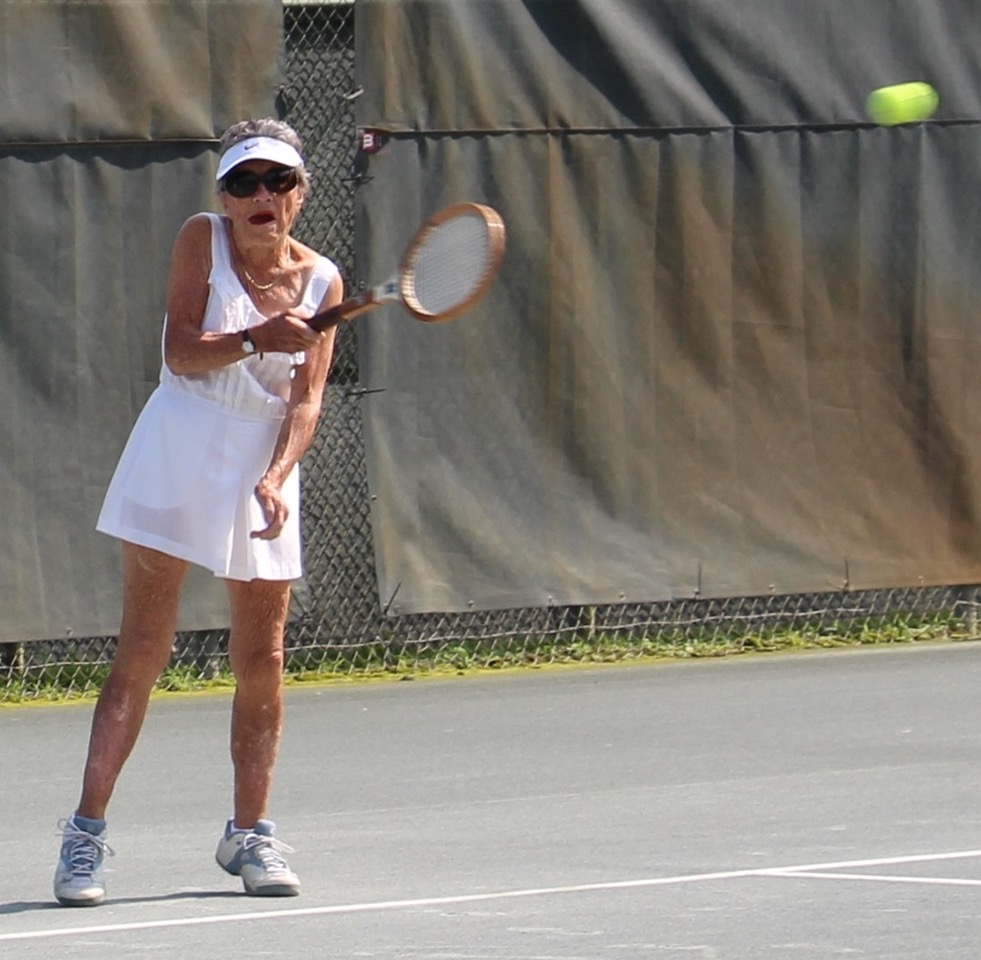 For several years in the 70s, Ann was a prolific, published writer. A large black binder is thick with clippings of her articles: Pieces on skiing, white-water rafting, cooking, gardening, a first-person article on her life on Dunvegan, the boat, and a series on women in racing.

Buried in the fat book is a sly little piece by “anonymous.” It tells of a woman, who in an effort to elevate her intellect and conversational game, enrolled in a philosophy class at the nearby community college. She felt revealing her ambitions to her women friends might alienate her, so she told them she was taking a belly dancing class, instead, “It just came out that way.” Her friends were intrigued with her fictional endeavor, even wanted her to show them her moves. She felt herself becoming that other person, the exotic belly dancer. The writer proceeded to transform herself-hair, clothing, and mannerisms into a sophisticated woman in her 40’s. Ann’s wit and sense of humor lay bare on the page.

A decade ago, brain surgery to address an acoustic neuroma, discovered when her tennis friends noticed her uncharacteristically missing shots, put quite a scare in her friends and family. But not Ann. The woman who never takes a pill—not an aspirin, or a vitamin and certainly not a prescription—put her optimism to work and was back in the bustle of her active life in a matter of months. “She just acted like it was no big deal—she wasn’t going to let something little like brain surgery slow her down,” remembers Crenshaw.

“She’s unconquerable,” says Crenshaw. “And always looking for ways to help people behind the scenes.” “Ann has strong opinions when it’s just the two of us, but she is always cheerful with a great outlook,” her friend of over 30 years, Lenny Hale says. “I told her I need to get some serum from her before she leaves.”

Ann has many nicknames: Granny Annie, The Boat Lady, The Troll of the Bridge, Mayor of Upperville, and The Widow, which she bestowed upon herself. She embraces all of them. Her ties to the community and her relationships abound in mutual respect. She is always at the ready to help and to join in. Her friends, old and new, span generations and ethnic and social demographics.

All of Ann’s qualities—her personality, passions and attitudes blend together in a fusion of a rare kind of grace. Ninety-six years of steeping in kindness and optimism renders Ann MacLeod a good, strong broth.

This article first appeared in the January 2018 issue of Middleburg Life.