Hope & Healing At A Place To Be

To give hope and then deliver on it could well be the motto of A Place To Be.

Two wholehearted, like-minded people met in 1999: Tom Sweitzer, a man of music; Kim Tapper, a woman of dance. They quickly discovered they’d both suffered the loss of a parent and childhood trauma and that music and dance had saved them. Tom had been an actor since he was a child and found his voice in theater and music. As a dancer, Kim’s voice was found in movement.

“We knew immediately that we were going to be a significant part of each other’s lives,” says Tapper.

The perfect couple who aren’t a couple found their soulmate in each other. They’re kindred spirits who have always understood that music and the expressive artsare great healers.

After working together for several years on productions and music programs at Middleburg’s Hill School, an idea erupted out of their mutual desire to help heal others through music and performance. “We both want to fight for a better world,” says Sweitzer. 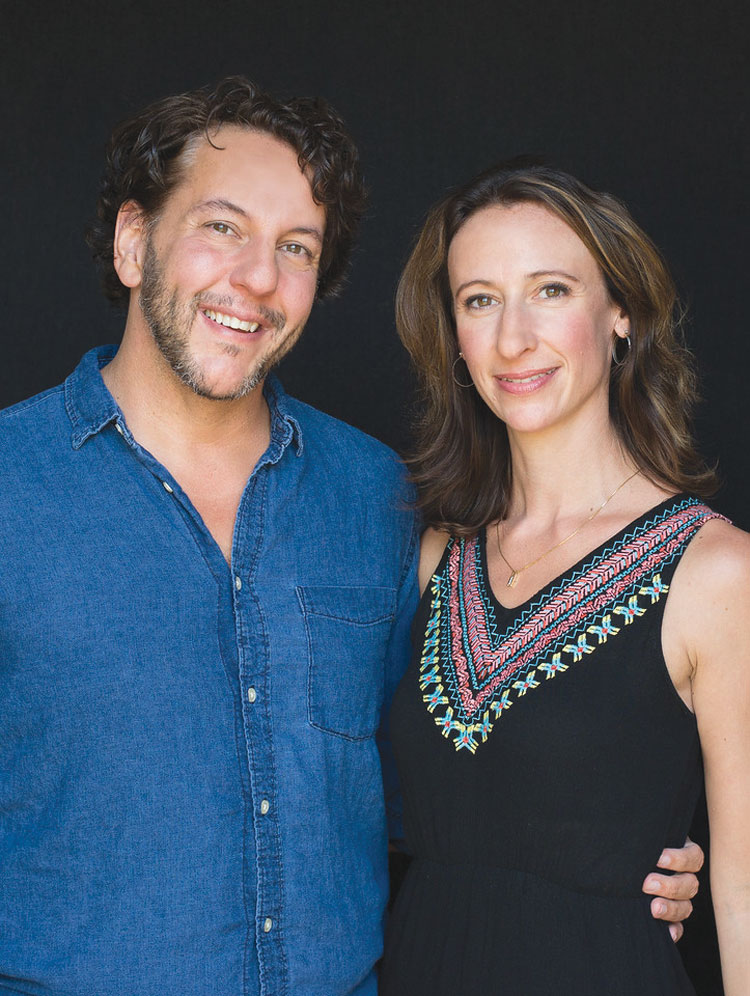 Inspiration, initial financial backers and the vision of Sweitzer’s very first client, Amy, gave birth to A Place to Be. With 21 original clients, the non-profit came to life in a small storefront in the center of Middleburg. At first the plan was to simply provide private therapy sessions and present play productions.

From their modest beginnings, A Place to Be in only seven years has grown to serve more than 350 families. Their operation includes 53 music and expressive arts therapists, staff and interns, 40 volunteers, and last year 539 donors and grants raised $763,000. They now convene in their rented 4,500-square foot venue on Jay Street in Middleburg, and they have hopes for a larger building that offers outdoor space. Clients range in age from 3 to 90 and face physical/medical, behavioral/learning, intellectual/developmental, social/mental/emotional and life challenges, including cerebral palsy, traumatic brain injury, cancer, autism, Down syndrome, stress anxiety, grief and more.

“This is what I envisioned from the beginning,” says Sweitzer as he looks around at the approximately 40 joyful cast members of two upcoming productions, “A Will to Survive” and “One Second of Grace.” The past several hours spent in energetic and organized rehearsals include young men and women with a spectrum of challenges working together in music and movement.

Sweitzer and Tapper haven’t slowed in their pursuit for A Place To Be’s, nor their own, personal goals. They float ceaselessly and seamlessly from private sessions in their offices to group meetings to rehearsal to meetings with clients’ parents and spouses. Yet both therapists somehow find time to continue to enrich themselves professionally through continuing education, higher degrees, speaking engagements, conferences and retreats.

Tapper has built her credentials one discipline at a time: expressive arts therapist, licensed life coach, master’s degree in psychology, and finally trauma informed therapist. Sweitzer built upon his bachelor’s in music theater and master’s in music when he received a master’s in music therapy. From the onset, the two were determined to build A Place to Be into a credible non-profit operation that used evidence-based practices to achieve remarkable, if not miraculous, results.

Sweitzer shies away from the word miracle. “To say anything we do is a miracle is to say it isn’t replicable,” he says. Because healing is more a journey than a destination, most results are achieved incrementally. Even so, the milestones and achievements of their clients can very often appear miraculous.

Twenty-four-year-old Forrest’s story is so extraordinary as to evoke images of burning bushes and parting waters. After suffering a grave traumatic brain injury from a snowboarding accident seven years ago, the teenager was left motionless and speechless. When Sweitzer started working with Forrest, a mere move of his pinky was cause for celebration. Months of persistent therapy to find Forrest’s voice passed with little progress. First Sweitzer had to teach Forrest to blow air through a straw, then through a recorder, then hum and finally, two years later Forrest spoke a breathy “good morning” and later landed the B flat note of the word be, in the Beatles’ “Let It Be.” Each small step a cause for rejoicing. Many other celebrations were peppered between the oftentimes life-threatening 31 surgeries young Forrest has endured. It has been a harrowing journey, at best.

Today, Forrest sings, dances and speaks with pitch, rhythm and humor; clearly, this is nothing short of remarkable, if not miraculous. 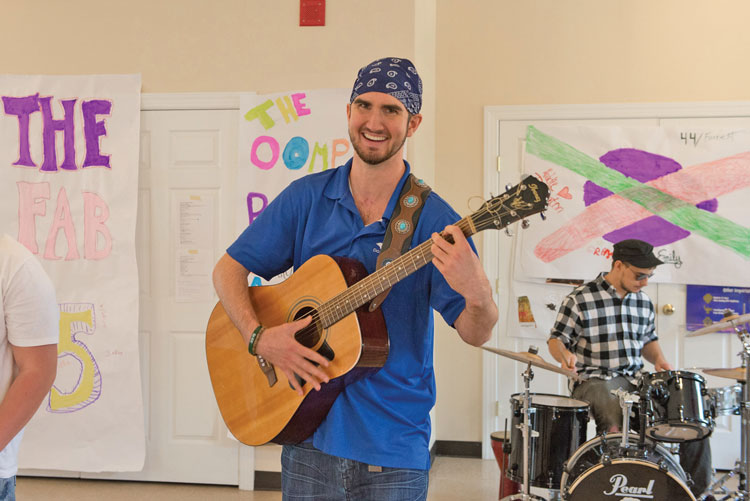 Forrest, the subject of the soon to be released documentary, “Music Got Me Here,” continues to progress in his healing. “I want to go away to college,” he says. “I want to live independently.” Unfathomable concepts just a year ago. Much of his healing and hopeful future are attributable to Sweitzer and music therapy.

But Sweitzer also deals with mental health issues, “kids who cut themselves or are suicidal,” he says, with challenges running a full gambit of type and severity.

When Erica was only 12, she started seeing Tapper for life coaching. She was finding her way through her parents’ divorce and found the community of A Place To Be just what she needed. Soon she was volunteering, first with weekly social groups and then musical and improvisational groups. Erica discovered that in helping others, she, too, was benefitting. The once introverted teen with low self-confidence found that the groups drew her out of her shell.

“You can come here no matter what your challenges are, be yourself, and no one will judge you,” she says. Now a high-school senior and editor of the school newspaper, Erica not only found her voice, but she talks and writes about social justice, human rights and activism.

Examples of the far-reaching healing effects of music and expressive arts therapy are in evidence in every room of the operation on Jay Street. On any given day or evening, the studios and offices are full of people of all ages facing, navigating and overcoming life’s challenges—the mission of A Place to Be.

“No one is without challenges,” cites Tapper, and when fears and hopes are shared in the same space, a room or a stage, healing is contagious. It doesn’t matter whether the person is wheelchair bound or trapped in one’s own mind without the power to speak. Whether a person is challenged with depression or autism, cancer or grief, hope lies in the field of therapeutic arts and a community of people who care.

“When one extends a hand to another, and that person extends to another, and so on, all are helped,” offers Tapper. There is no hierarchy of importance in comparing the challenges of a youth with autism to that of a young woman with cerebral palsy. Both have much to offer in the healing of each other, and friendships are formed.

Sweitzer says love best defines A Place to Be: “It’s the single most important thing.”

Tapper thinks acceptance is the cornerstone. Both are in abundance and apparent to even a casual visitor. These values and emotions are displayed through connections between clients and between therapists and clients. Photographs, artwork and posters covering the walls of the brightly painted interior depict the presence of these and other virtues.

The Same Sky Project is A Place To Be’s major outreach effort featuring three shows that have reached 60,000 students in Loudoun County middle and upper schools. “A Will to Survive,” “One Second of Grace” and “Behind the Label” are theatrical productions that tour nationally with the goals of raising awareness of mental health issues and of teaching empathy and acceptance. “A Will to Survive” tells the story of a young man who battled depression and bipolar disorder for years before taking his own life in 2016. By popular demand, the show will again be touring this year and is even booked for the Kennedy Center (D.C.) on November 19. 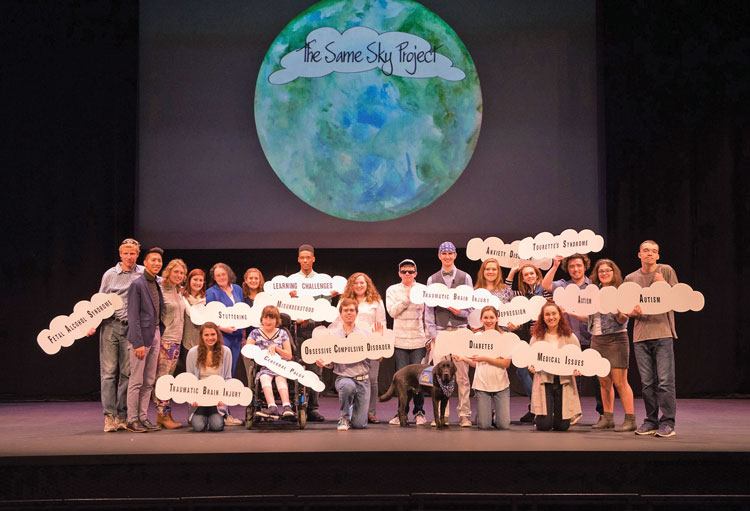 The Same Sky Project’s Behind the Label was the brainchild of client Amy.

In addition to individual therapy sessions and musical productions, there are five other core programs, all rooted in clinical and evidence based practices, that extend A Place to Be’s mission past its humble beginnings. Weekly Lunch Bunch engages volunteers and adults with intellectual and developmental disabilities in fellowship, music and movement. An Immersion Program is held several days a week for different age groups and uses the arts to guide participants toward self-development and awareness and achievement of their life goals. There are social groups designed for youth with social and emotional therapeutic needs. The always popular summer camps featuring full-scale musicals and rock concerts offer chances for youth to explore and expand their inner selves and imaginations. And Medical Music Therapy through INOVA Hospital regularly serves patients in ICU, Palliative Care, Stroke, Oncology, COPD, Pediatrics, Adult Mental Health and Outpatient Rehab.

“The work that Tom and Kim are doing at A Place to Be is the most progressive and meaningful work I have ever seen,” says Kathleen M. Howland, Ph.D., Berklee School of Music (Mass.) professor and 35-year veteran of music and speech therapies. “From the first time that I met Tom as my master’s student, I felt instantly aligned with his workand objectives.”

Compassion, acceptance and hope are as important as the clinical modalities used and represent what is both unique and transformative about the mission and approach of the organization’s professional team.

“Their organization is built on the working values, not just stated values, of inclusiveness, purpose and empathy,” says Dr. Howland. “All of their work with clients flows from this.”

Sweitzer and Tapper have married their talents with their passion for healing and music to create remarkable results. Helping the voiceless to sing, the depressed to feel joy, the isolated to connect, the introverted to perform are all in a day’s work.

It is no wonder that A Place to Be thrives. Trading in love, compassion, acceptance and hope is a brilliant business plan. They are the keystones to healing, no matter the challenge.    And they are free, renewable resources that when shared, proliferate.

Call that a miracle if you want. ML

To volunteer or contribute visit http://www.aplacetobeva.org/