Flint, the resident cat, is the first out of the barn. That wasn’t always the case, since year s earlier, horses galloped out.

Today, this 1875-built barn serves as the tasting room at Loudoun’s first winery: Willowcroft Farm Vineyards in Leesburg. It’s here where wine lovers sip reds and whites from some of Virginia’s oldest grapes.

Out of the Commonwealth’s 280 wineries, 44 of them (16 percent) are in Loudoun—the most of any county in Virginia. Vines at Willowcroft hold the record as the first planted in Loudoun County.

“I’ve been making wine for over 30 years, the longest in Loudoun,” says Lew Parker, owner and winemaker.

Over the years, Parker and his wines have been consistent winners. Some distinctions include Parker being honored in 2002 as the Virginia Wine Industry Person Of The Year. In 2011, he received the Governor’s Cup gold medal award for the 2010 dessert wine, “Claire,” named after their French intern. In 2013, Parker received the Gordon Murchie Lifetime Achievement Award. 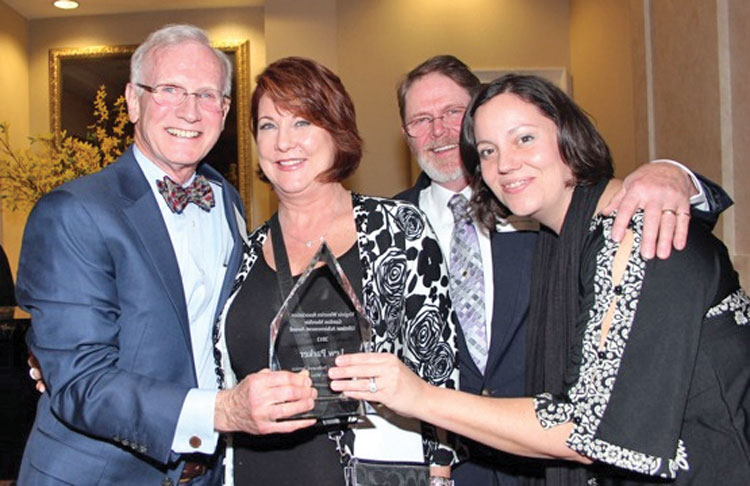 It all began in October 1979 when Parker purchased the 30-acre horse farm called Martingale. He moved the family into the farmhouse; the oldest part is a log structure dating to 1790. Inspired by two looming willows that stood in the entrance circle, he renamed the farm Willowcroft.

Educated as an engineer from Lehigh University (Pa.) and having earned a master’s in finance from Wharton School of the University of Pennsylvania, Parker worked in Tysons Corner as a chief financial officer at Hazleton Laboratories before adding “winemaker” to his resume. When Hazleton was sold, Parker got involved in the medical device business and founded companies making orthopedic prosthetics while still crafting award-winning wines.

Back then, the Parkers lived in Oakton. “Our two daughters were into 4-H clubs, and we couldn’t raise animals there. So in 1979, we decided to buy land,” Parker explains.

The following spring, vines were planted in the old vegetable garden, but by the end of the year, they all died. “They grew too fast and didn’t harden off for winter. Lesson learned!” Parker admits. In 1981, he planted again. This time, it worked. His first commercial crush was in 1984, and sales began a year later with the opening of Willowcroft in April 1985.

When Parker purchased the farm, the USDA advised against commercial wine growing since it was still too risky for vines to successfully grow in Virginia soil. But the industry changed thanks to Konstantin Frank, a Ukrainian plant scientist who immigrated to New York and worked at Cornell University, which had a wine program. Frank proved it was possible to grow European grape varieties in the eastern United States. Prior to this, it was not considered possible to grow a Chardonnay, Riesling or Cabernet Sauvignon vine in Virginia. 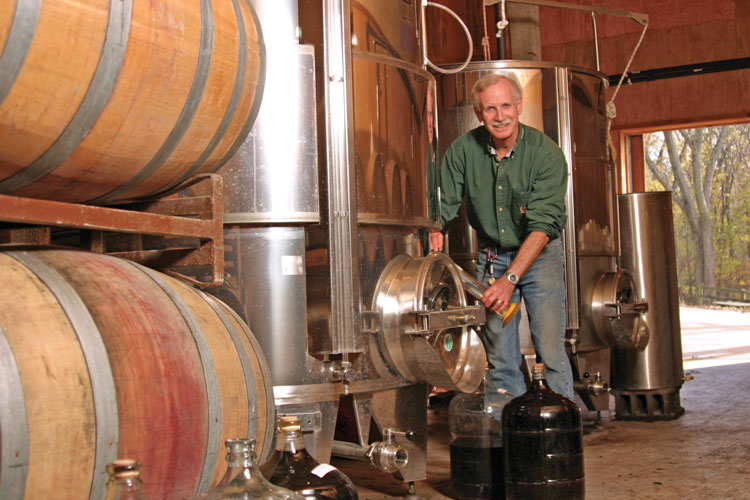 Lew taking a tank sample from one of his award winning wines.

Parker says, “Frank is considered the father of the wine industry for the eastern U.S.”

Located on Mt. Gilead Road, Willowcroft’s roots run deep. There is a reference to Gilead in the Bible’s Old Testament as a mountainous region east of the Jordan River. In Eugene Scheel’s book, “Loudoun Discovered: Communities and Crossroads, Quaker Country and the Loudoun Valley (Volume Four),” he writes that in 1821, Dr. Isaac Eaton purchased 18 acres to establish a health spa from the area’s mountain spring waters. In 1823, Eaton sold three ½-acre lots on his property to establish a settlement named Mount Gilead. In 1824, a post office was established in the village, which by 1825 extended to 22 lots and several streets.

William C. Ray’s book, “Mount Gilead: History & Heritage” (available for purchase at the winery) notes that William G. Jenkins purchased the land in 1877 from Landon Jones, a blacksmith. The price was $2,571. (The Jenkins family also ran the mill in Leesburg where Tuscarora Mill Restaurant is today.) In 1933, W.S. Jenkins sold the property to a D.C. dentist, Dr. I.G. Kohlmeyer; Jenkins claims that as a boy, he watched Confederate troops pass down Mt. Gilead Road after the Battle of Antietam (Sept. 17, 1862) near Sharpsburg, Maryland.

In postbellum years (1865-1877), the village grew with a school opening in 1870 and several stills at the springs that once fed the health spa. With the coming of Prohibition in 1921, Mount Gilead’s industries dried up. By 1930, the county stopped maintaining the road, so what was once a village is now a small residential community. But with the opening of Willowcroft, the area has returned to its post-Civil War spirits industry.

Scheel, famous for his hand-drawn intricate maps, explains the origin of nearby Hogback Mountain Road, once part of Route 15. “It’s called Hogback Mountain,” he says, “because looking from Leesburg the field resembles a hog lying on his back.” This road is included in Scheel’s 1990 hand-drawn Loudoun County map, which can be found under a glass case at Thomas Balch Library in downtown Leesburg.

“People come here for the wine,” Parker says. “We’re not in the entertainment business.” Willowcroft offers a “Press”tige Wine Club. “There’s a maximum of 400 people in the club, so now we have a waiting list.”

Jeff Gaines, of Fairfax, can attest to Parker’s winning wines. On a recent Friday afternoon, Gaines came to Willowcroft with his wife, Cris, and their daughter, Ive, a recent college graduate.

Jeff said, “One day we came out for a tasting. Cris and I found wines we both liked, so we joined the wine club and keep coming back.”

Guests can purchase cheese and other goodies to go with wine, including an assortment of truffles from Middleburg’s Finest Chocolates.

Cris added, “I love the truffles. The dark chocolate raspberry one is the best. It’s heaven.”

And about that cat, Flint. Ive admits, “I love the cat in the barn—so chill!” ML