A customer and his excited dog stick their heads in the door and Dwight greets them both by name. The quick conversation suggests a friendship beyond a client/barber relationship. When the man and his dog leave, Dwight moves effortlessly back to the task at hand, a razor cut and beard trim, and a warm conversation with the man in his chair.

“When you talk all day, you find a way to make what you say interesting,” he says, but with more humility than the words suggest, because Dwight is more a listener than a talker—an open vessel for others’ words and ideas. He gives all his clients an equal voice, no matter their politics or beliefs. “I want to offer beauty and strength to all kinds. I know how to manage pain and am not burdened by people’s stories, so I can accept them for what they are. I try to be patient and kind and that allows me to accept differences.”

“Most customers come in and start yawning,” he says as he gently brushes the hair from the neck of his client. “They relax. It’s about touch. Someone else’s touch can relieve your stress—you can’t do that for yourself.”

Dwight has clearly figured out the nuances of providing a quality personal service, but his success and expertise extend much further than his chair-side manner. He figures he has completed over 250,000 documented haircuts over the past 20 years and has accrued 734 clients after only six years in his Middleburg shop, Salon Aubrey, named after his oldest daughter. After realizing that this small community couldn’t fully support a high-end barbershop, he added women’s hair services, of which he was equally trained to provide. His business now includes women’s cuts and color and all the traditional services of a barbershop, including a few regular clients who come in for the traditional straight razor shave. 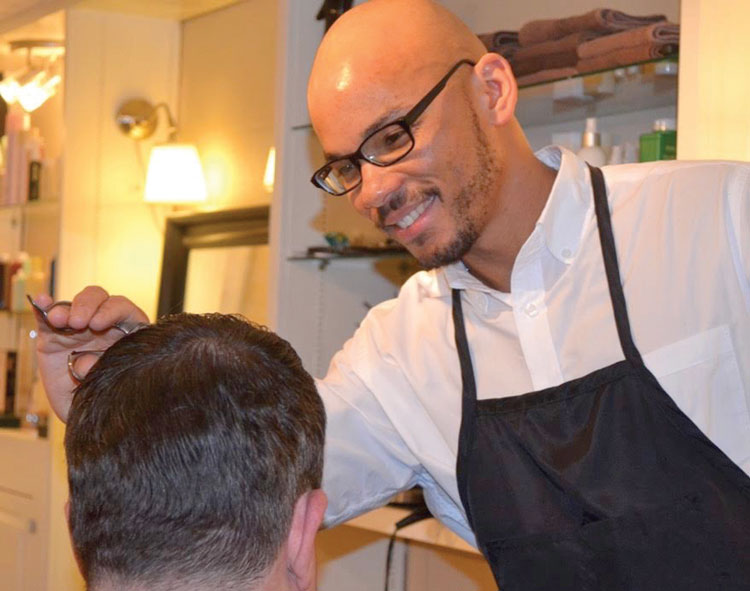 Dwight’s affinity for children led him to fashion his shop for families, instead of what would have been a more lucrative business catering to mostly affluent women. He loves children and has enjoyed watching his customers grow up over the years. “One boy, whose hair I have been cutting since he was three, came in the other day with his girlfriend. She was all over him,” he says. “ And I realized, he’s a man now. And I’m still cutting his hair.”

“I’m proud to say that each generation of my family has made positive impacts on this community.”
-Dwight Grant

Dwight regularly works out at a gym to counter the effects of standing all day with arms suspended at shoulder height, and is also training for a triathlon. Woodworking, too, gives him both the physical and mental release needed after a long day or week. Dwight made the counter in his shop and the beautiful walnut top was harvested locally.

For someone who talks to people all day long, “the perfect amount of conversation,” said one customer, he is more introvert than extrovert, by his own admission. “I feel nurtured in silence,” Dwight allows. “I have a lot of interesting thoughts; I don’t feel the need to talk to someone all of the time.”

Dwight makes his home in Centreville where he and his wife, Judith, enjoy their blended family of six children. “We’re the modern-day Brady Bunch,” he says, “My three biracial children and her three biracial children.” Their children range in age from eight to 25 years old and recently Dwight’s oldest son was offered a scholarship at New York University and plans to attend there in the fall.

Dwight’s mother’s and father’s families go back eight generations in this Piedmont area of Virginia, and though he was born in Washington, DC, Dwight lived in Upperville for much of his childhood and adolescence and is considered by locals to be a hometown boy returned.

“I’m proud to say that each generation of my family has made positive impacts on this community,” he says. Dwight certainly is carrying on that family tradition. ML