After 400 Years, Virginia Wines Have Come Of Age

Learn How The Virginia Wine Industry Has Developed, Thanks To a Few Tenacious Pioneers

It’s time to raise a toast to Virginia wines. After all, no state can claim a longer history of experimenting with and promoting viticulture than the Old Dominion. Nor has any other state demonstrated such an astounding record of failures that eventually led to fame. Peeling back 400 years of history, Virginia’s attempts of wine production are traced to its first settlers.

But it wasn’t until the 1970s when the industry really began to take root. In only 40-plus years, how did we go from a meager six wineries in 1979 to a whopping 300-plus in 2021? Chris Pearmund, owner of three Northern Virginia wineries: Pearmund Cellars in Broad Run, Effingham Manor Winery in Nokesville, and Vint Hill Craft Winery in Warrenton, puts it like this: “One glass at a time.”

As Virginia’s first multiple-winery owner, Pearmund says, “The 1970s was Virginia’s end to Prohibition.” That’s when state laws began to change, uncorking new potential for wineries. Now the state is home to over 4,000 acres of grapes, is clustered into 10 geographical regions, and has eight AVAs (American Viticultural Area).

But Wait … A Quick Glance Back

On April 26, 1607, the first English explorers landed at Cape Henry (Virginia Beach today), and when barrels of European wine washed ashore, they took notice. A few weeks later, on May 14, 1607, the Virginia Company of London officially established Jamestown about 60 miles north. Because Jamestown was the first permanent English colony, Virginia is considered the birthplace of America.

Also, at Jamestown, the Virginia General Assembly was established in 1619, which is the first legislative assembly in the American colonies, marking it the oldest continuous law-making body in the New World. One of the laws enacted by this first Virginia General Assembly included “Act 12,” which required every male to “yearly plant and maintain ten vines until they have attained to the art and experience of dressing a vineyard, either by their own industry or by the instruction of some vigneron.”

Over the centuries, there were many starts and stops, not to mention the Civil War (1861-1865) and a little thing like Prohibition (1920-1933). While much of the world brushed off Virginia viticulture attempts, a handful of pioneers pressed on; they ranged from European immigrants to brave souls hoping to keep land in agricultural use to others who wanted to try their hand at a new crop. Read on to discover some familiar names and wineries surrounding Middleburg, which is considered the heart of Virginia’s wine and horse country.

The Vinifera Wine Growers Association (VWGA) was Virginia’s first modern wine advocacy organization formed in 1973 by Robert de Treville Lawrence, who in 1968 planted a small vineyard of 100 vines next to his stone house, Highbury, in The Plains. The list of the group’s founders—and its general membership— was filled with prominent families from rural Loudoun and Fauquier.

VWGA disseminated information on viticultural developments and advocated for better government-sponsored research. In December 1976, VWGA reps met with Governor Mills E. Godwin and the Virginia Department of Agriculture and Consumer Services (VDACS), which released promotional plans to support the fledgling Virginia wine industry. Those actions by VDACS sparked the beginnings of what would become a continuous chain of support by the state government. In 1979, the Virginia Vineyards Association was formed as a collaborative effort among Virginia viticulturists, wineries, and Virginia Tech to oversee and elevate the industry. Those efforts paid off.

By 1980, the call was loud enough for the Virginia General Assembly to pass the Virginia Farm Winery Act on March 24, signed into law by Governor John Dalton. This eliminated a cumbersome three-tiered system that separated manufacturers, wholesalers, and retailers. Pearmund said the Farm Winery Act opened up the ability to not only grow vines, but to also make wines on the same property and sell them. This began Virginia’s modern era of the wine industry.

In 1984, the Virginia General Assembly established the governor-appointed Virginia Wine Board (then called Virginia Winegrowers Advisory Board) and created three staff positions focusing on marketing, research, and education. For marketing, in 1984, the Board hired Lou Ann Whitton as the state’s first wine marketing specialist. For research, Dr. Bruce Zoecklein was hired in 1985 as the state’s first professional oenologist and joined Virginia Tech. For education, Dr. Tony Wolf joined Virginia Tech’s Cooperative Extension Service in 1986 as a state viticulturist. In June 1987, Annette Ringwood Boyd became the second marketing specialist after Whitton.

Dr. Zoecklein, now retired, traveled to wineries and advised growers on winemaking styles, aromas, chemical consistency, how to prevent wine from oxidizing, etc. Dr. Wolf is still educating growers on how to plant and harvest, advising which grapes are best for Virginia’s climate and soils, the best processes to grow grapes, spray schedules, etc.

Pearmund adds, “Annette helped put the Commonwealth on the map, marketing it as a top wine destination.” She developed the passport program that lures wine lovers to winery-hop across the state, earning a stamp with each visit.

“Nationally, Virginia has a small production amount,” Pearmund says, “but we get a lot of accolades and are a leader on the East Coast because of those three people [Boyd, Zoecklein, and Wolf].”

In 1990 when Pearmund was the winemaker at Naked Mountain in Markham, there were no picnic tables. People just did tastings and then bought bottles to take home. “We started charging $2 to $3 for a wine tasting fee, which was a new approach,” he says.

Boyd agrees. “In the 1990s it was a big deal to charge a tasting fee; that was a real evolution,” she says.

In the 2000s, more changes widened the reach of Virginia wines. Middleburg’s Juanita Swedenburg of Swedenburg Estate Vineyard is known for winning a landmark case in the U.S. Supreme Court (Swedenburg v. Kelly) in 2005, which removed barriers that kept wineries from shipping directly to consumers in other states. The winery dates to 1976 when she and her husband, Wayne, both former U.S. Foreign Service officers, purchased the farm and in 1988, opened Swedenburg Estate Vineyard (now Greenhill Vineyards).

In 2007, Virginia wines spilled onto the international stage. That’s when Pearmund received a grant from Virginia Farm Credit to attend a European wine show. “We pulled together 12 Virginia wineries and went to London for an international competition,” he says. “If Virginia wines were going to sell, we had to get noticed. The London trip was a game-changer. The perception of Virginia wine changed.”

The Survivors, Still Pressing On …

Originally established as Meriwether Vineyard in 1976, Pearmund purchased his Broad Run property in 1993 and turned it into Pearmund Cellars. Surrounding the winery are the oldest Chardonnay vines in the state.

Further west, Shenandoah Vineyards in Edinburg was also started in 1976 by Jim and Emma Randel. They plowed the property where Emma’s mother was born and planted over seven acres of vinifera and French-American grapes. In July 1979, they opened Shenandoah Vineyard in a converted Civil War-era barn. Pearmund says, “People, including those at Virginia Tech back then, didn’t think it would work. But Emma was successful.”

In 2018, current owner Michael Shaps purchased the winery. He also started his own brand, called Wineworks, in Charlottesville, owns a winery in France, and is a consultant. “Emma knew the potential and was happy to sell Shenandoah Vineyards to me,” he says.

Other local survivors include pioneering vintners such as Italy’s Zonin family who in 1976 purchased Barboursville Vineyards. Another is Jim Law at Linden Vineyards. He bought 76 acres in 1983, turning around an abandoned apple orchard, and planted vines in 1985; his first commercial vintage was in 1987.

Lew Parker ushered Loudoun into the county’s modern wine industry, opening Willowcroft Farm Vineyards in Leesburg in 1984. In 1980, Parker planted vines, but admits, “They all died. I didn’t know what I was doing. No one knew what they were doing.” Parker adds, “Those early winemakers were taking all the risks before the state decided to get behind the industry. Thanks to Zoecklein and Wolf, we have winemakers who know how to make great wines. Grapes for wine production are a high-value crop—that’s important for counties like Loudoun and Fauquier that are under pressure to keep developing. Today, farm wineries and vineyards are the fastest-growing segment of Virginia agriculture.”

In 1988, Jennifer McCloud planted Norton vines, a native Virginia grape, a few months after purchasing the Middleburg property that she christened Chrysalis Vineyards. By the 1850s, Norton was a widely planted varietal in Virginia, but it died out during Prohibition. McCloud is credited to restoring the native Virginia Norton grape and bottled her Norton Reserve in 2000.

In 2001, Jim and Lori Corcoran, owners of Corcoran Vineyards and Cidery in Waterford, started prepping fields on their property, which was a goat and sheep farm. They converted a 1750 log cabin into a tasting room and opened in 2004.

“We had the first brewery and winery combination in the state in 2010; we did that before it was popular,” Corcoran says. “We’ve always been a small, family-run winery and are one of the smallest in the state. We like it that way.”

Pearmund, who has been a consultant for several wineries, says, “If we want to increase our slice of the pie, we need to act as one slice of the pie. When we help each other, we’re helping the entire industry—it’s a collective mindset. Virginia’s over 4,000 acres of grapes are a drop in the bucket in the wine world. If we can have our wines consistent and prove it to the world, then we can stay in business.”

As Pearmund says, “Virginia is steeped in history. It’s the cradle of the Americas. And now our wine—after 400-plus years—is coming of age, and we can hold our own.”

Let’s toast to that! ML

Locals may remember Farfelu Vineyards in Flint Hill. Farfelu (which is French for “eccentric”) was the first licensed winery in the state, dating to 1967. A former Navy pilot, Charles Raney chose the name because he was told he was crazy to try to make wine in Virginia. It was known for perfect “daycations” complete with a nature trail, pond, and lush forests. The owners retired, and no family members continued the business.

Meredyth Vineyards in The Plains outside of Middleburg got its start in 1972 when Archie M. Smith, Jr. planted vines on his cattle farm, then called Stirling Farm, and renamed it “Meredyth” (Welsh spelling) after his maternal great grandmother. When the cattle market became erratic, he had to decide what to do with the land he had farmed since 1953. His son, Archie M. Smith, III, suggested planting grapes and became the winemaker; the winery obtained a farm winery license in 1975, the second such permit to be issued in Virginia after Farfelu. The Smith family went on to play an important role in the Virginia wine industry. In 2000 it closed, and in 2017, property owner Jacqueline Mars placed the 200- plus acre property under conservation easement with the Land Trust of Virginia.

Less than a mile from Meredyth was Waverly, a 500-acre dairy farm-turned-winery by local socialite and horsewoman Elizabeth Merrill Furness. In 1973, the 75-year-old converted part of Waverly’s declining dairy operations near Middleburg into Piedmont Vineyards, which became Virginia’s first commercial vinifera vineyard. Her daughter, Sis Worrall, resumed vineyard operations when her mother died in 1986. It closed in 2013.

Then there was Oasis Winery in Hume, founded in 1977 by the Salahi family. The winery was known as a popular destination for limo wine tours and classy events. In November 2009, Tareq Salahi and his then-wife, Michaele, became known as the infamous “White House crashers” for attending a state dinner allegedly uninvited. In 2013, the winery property was sold at auction. 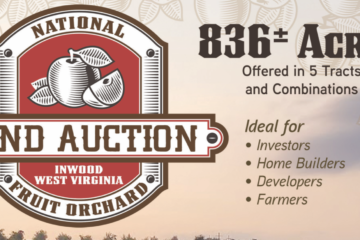 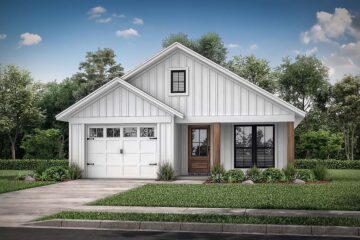 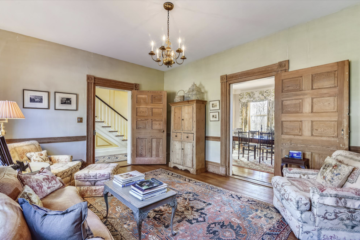 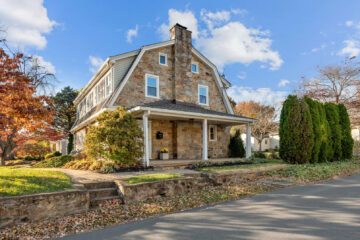