The heat is on for area farmers with soaring summertime temperatures and wicked weather patterns.  Many growers are welcoming the warmth after a wetter-than-average spring and freeze damage in April.

A June 20 crop progress report from the U.S. Department of Agriculture noted that topsoil moisture conditions around the state remain good, with 86 percent of farmland reporting adequate or surplus moisture. Subsoil moisture levels also are quite high, meaning crops should have plenty of moisture to survive early-summer heat. 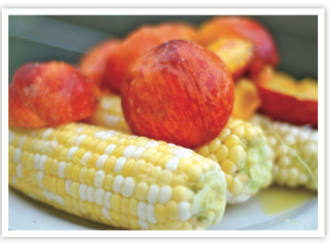 Lingering effects hover from spring’s heavy freezes. As peach season begins, 51 percent of the state’s peach crop is expected to be in poor or very poor condition.

“There’s some peaches in the area, some growers have half a crop, some as little as 15 percent,” said John Marker, owner of Marker-Miller Orchards. “It won’t be a big crop, but there will be peaches this summer. Even up into Pennsylvania they have the same situation. Those last two hard frosts in April killed a lot of blossoms.”

After several weeks of delays for spring planting and hay cutting, growers have pretty much caught up on field work, according to the report. Soybean planting is well behind the average pace, but corn growers reported the majority of their seeds are planted and growing well. Many grain growers in Eastern Virginia also are harvesting winter wheat this month. A June 13 USDA report predicted the 2016 wheat harvest would be down 16 percent statewide.

“I just started harvesting yesterday. Yields are down, and the market is still not very favorable,” said Mike Bryant, president of Northumberland-Lancaster County Farm Bureau. “Many farmers didn’t plant as much wheat last fall, because there’s not a lot of profit in wheat right now. Plus we’ve had a really wet spring, a lot of disease pressures, so if you didn’t take care of it you might see more problems. “But we’re having rain, and the corn and soybeans are looking good right now.”

Rain in May also put hay growers behind schedule. But weather patterns were different in far Southwest Virginia, and growers are pleased. “Our hay cutting was pretty good in Washington County. A lot of farmers are saying it was the best we ever had,” said Mindy McCroskey, a Washington County beef cattle producer and agriculture education teacher.  “It’s pretty dry right now, but the first cutting quality was good. Most people here started cutting around the last of May. We had off-and-on showers but nothing that held us up for days at a time.”

In addition to harvesting hay and wheat, other farmers are fertilizing their new corn crops, and vegetable growers reported the moisture is helping their crops thrive.

Virginia sweet corn typically doesn’t make its debut until early July, but there is plenty of fresh summer produce just waiting to be picked. You can find summer fruits and vegetable at local farmers’ markets and farm stands in Middleburg and at the Green Barns in The Plains. Much of it perfect for serving at summer cookouts.

“Right now we’re picking cucumbers, peppers and squash, and soon we’ll be harvesting cantaloupes, watermelons and tomatoes,” said Rob French, who helps operate Sunny Side Farms in Cumberland County. He and his father and two brothers grow 120 acres of fruits and vegetables that they sell on their farm and at a roadside farm stand in Powhatan County. “We should be picking sweet corn by the end of this month, and it’s highly sought-after, especially for Fourth of July cookouts.”

“Really, there is such a rich variety of fresh fruits and vegetables at this time of the year that shoppers shouldn’t have any problem finding something to suit their taste or occasion,” said Tony Banks, a commodity marketing specialist for Virginia Farm Bureau Federation. “When you visit farmers’ markets this summer, you will find a rainbow of fruits and vegetables at the peak of freshness.”

French said his family offers customers recipes and tips on how to prepare all the fresh produce that they grow. The employees who work at the farm stands are required to cook and eat every recipe at least once so that they can make recommendations, he explained.

“Most every vegetable is grillable,” French said. “Lots of people don’t like squash, but if you marinate it in Italian dressing and grill it, they will like it. If the grill’s already fired up for hot dogs and hamburgers, you might as well throw some vegetables on there as well.”