“What is it about these fine southern evenings, when the sun is setting, and the air is close, that make us want to thinkback…”

Rich Gillespie, executive director of the Mosby Heritage Area Association, allowed his voice to trail off as he led an enthusiastic crowd around the front of the historic Mount Zion Church near Gilberts Corner. The group of about 40 were mostly parents and siblings of the ten children wrapping up a week of participating in a Civil War summer camp. 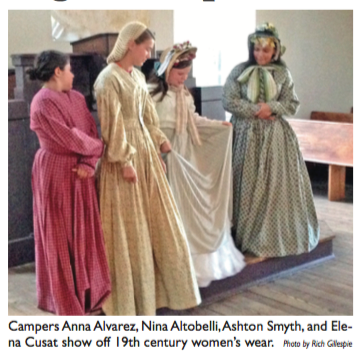 The camp was held under the auspices of the Northern Virginia Regional Park Authority, with support from the Mosby Heritage Area Association. In addition to the parents and campers, there were also representatives from the six sponsoring organizations.

Local chapters of both the Sons of Confederate Veterans and the United Daughters of the Confederacy, as well as the Sons of Union Veterans came together in support of the camp. Likewise, the Aldie Ruritans, the Aldie Heritage Association, and Leesburg’s Bull Run Civil War Round Table helped provide campers with reproduction kepis and wooden muskets. A number of campers were there on scholarships at the recommendations of their respective history teachers.

“I think it was more like a seminar than camp,” Gillespie said before he and his staff began a two-hour, two-part presentation of what the youngsters had been learning.

All of the campers had recently finished their academic years at local Loudoun middle and elementary schools and ranged in ages from 10 to 12.  There were several of the usual summer camp elements, as well as Civil War era baseball and games of capture the flag and a field trip every day. They included visits to battlefields at Balls Bluff and Manassas and a boat ride over to Maryland at White’s Ferry. In arts and crafts sessions, each camper was asked to design a flag of their choice.

According to camp coordinator Kevin Pawlak, the ten campers initially were asked to pick a side, north or south, and, coincidentally, they had five for each with no prompting. “No,” we had no fist fights,”  he said in response to a question.

“We talked a lot about what was happening on the home front, in Loudoun County,” Pawlak said. “How local people reacted to the war, a lot about the local soldiers who joined up. And it wasn’t slanted in any one direction, north or south.”

Inside the historic Mt. Zion church at the end of the session, all the campers gave presentations about what they’d learned. One group of girls, all dressed in period clothing, talked about various aspects of the female experience during the war. One described the fashion of the time, and emphasized how uncomfortable life would have been wearing a hoop-skirt.

Another related that a number of women had disguised themselves as men to fight. A third followed up by discussing the role women played in the war effort, especially in Loudoun County, where, because of its proximity to the union-held state of Maryland, local women took to smuggling contraband war material across the lines into Confederate Virginia.

Later, several boys in turn read aloud passages from diaries they kept as part of the camp’s curriculum. The campers even mimicked the wistful, romantic style of Victorian prose. Still, it was the content of their entries, not the stylistic flairs, that struck a chord.

They spoke about compelling themes of the Civil War, and all wars for that matter. One boy discussed the soldiers’ experience in battle with astonishing maturity. Then his friend, the most surprising student speaker of all, told the audience how Loudoun County was bitterly divided during the war and commented on the anguish of the residents who were forced to choose sides.

The only details that betrayed the age of the presenters were a few reminders from the staff to the campers to speak louder.