A Big Part of the Christopher Riddle Is Solved

The next phase in the life of our hero, Christopher Riddle, is actually a puzzle with more than a few pieces missing.

As I recounted in my last chapter, Christopher had been donated to the Farmington Hunt Club in Charlottesville and given a new job as a mount for the hunt staff.  Beyond that, it was difficult to get a clear picture of his life with the hunt club. 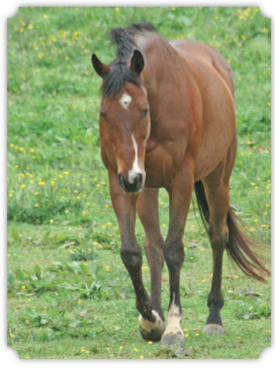 In fact, although I contacted many people involved with the hunt during the time of Christopher’s stay, few remembered the horse.  In the end, all I could gather were a few bits of second-hand information that, for whatever reason, Christopher “did not work out” in his new role.

However, I did manage to locate the woman who took Christopher from Farmington and briefly gave him a new home.  Though she did not remember much about him, she did recall that she sold him to Lisa Norell Carney, a school teacher from Jefferson, Virginia, for $1,000.

Christopher made a considerably better impression on Carney. At the time, Carney and her husband, Kevin, were shopping for a horse farm.

“We decided we wanted our own farm, “ Carney recounted.  “I had a yearling that I was boarding at a nearby farm until we could find a suitable place of our own, and I also wanted a horse that I could ride.  I would go on-line and check out horses for sale on the internet.”

As fate would have it, one of those posts featured Christopher, and once again, his kind expression caught his next owner’s eye. As soon as Carney saw Christopher Riddle’s picture, she set up an appointment to see him in person.

“I liked him right away, and I bought him on the spot,” Carney said. “I did not even worry about vetting him. He looked great, and the seller was straightforward about everything.”

Carneywas so convinced that Christopher was “the one” to be her new riding horse, she actually bought him before she and her husband closed on their new farm.  After boarding him for a few weeks, she moved him to the farm, christened Hope Spring Farm.

Once again, with a new home also came a new name.  At the time Carney purchased Christopher, he was known as “Troy.” Not liking that, she changed it to “Trey.”

She also knew from her earlier days with horses that the tattoo located under her new horse’s lip would tell her his real name and breeder. Her love of horses began as a young girl when she went to the race track with her father, who worked with race horses. Carney knew that all race horses had to be identified with a permanent tattoo under their lip so the Jockey Club could keep accurate records of all horses that raced in official pari-mutuel races.

“I immediately did my research on line about the tattoo number,” Carney said. She learned that Trey’s official name was Christopher Riddle and that I was the breeder.

Carney found me on Facebook and sent me the picture used for this article along with her questions and how much she loved Christopher.

I lost track of Christopher’s whereabouts after he’d left Tim Daly’s possession. Tim was the neighbor my father had given Christopher once his racing career was over. To be honest I did not notice Carney’s initial post on my Facebook page for over a year. When I did, I responded immediately. I learned about many of Christopher’s travels along the way with his numerous owners and about his stay with the Carneys.

It did not last very long.

By the time I contacted Carney, she had already sold Christopher to a friend.

Christopher/Trey spent a happy year at Hope Spring Farm.  Though Carney originally purchased him as a riding horse for herself, her plans changed when she began to givelessons to outside students.

Unfortunately, Christopher did not prove to be a good school horse, so Carney made the difficult decision to sell him and find a horse more suitable to use for lessons.  Still, she remembered Christopher very fondly. And it goes without saying, so do I.