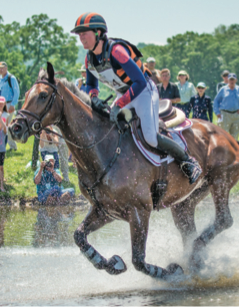 Lauren Kieffer grew up in southern Illinois in a family where horsepower had nothing to do with fast four-legged animals. Her father ran a trucking company, and liked to race dirt bikes.

“It’s where my adrenaline comes from,” Kieffer said.

She must have a lifetime supply considering her own competitive instincts. Two weeks ago, the 29-year-old rider was named to the U.S. Olympic team in the grueling Three Day Event. For the uninitiated, riders and their mounts compete in three different disciplines—dressage, show jumping and cross country, all on the same horse.

Kieffer, now living in The Plains, and her Olympic teammates will display their skills at The Land Rover Great Meadow International July 8-10, the first-ever FEI Nation’s Cup eventing competition in the U.S. against teams from Germany, Mexico, Canada and Great Britain. It’s the final prep before the Rio Olympics competition August 5-9.

Kieffer has been riding since age six and her parents’ graduation gift was tuition to attend an eventing camp in Lexington, Virginia run by David and Karen O’Connor, both American Olympians who also live in The Plains.

“I asked the O’Connors if I could be one of their working students up here,” Kieffer said. “You basically work for them in exchange for lessons. So I packed up and moved to Virginia.”

The O’Connors are based on farm owned by Jacqueline Mars, a long-time patron of the sport. Kieffer kept improving, making a number of young rider national teams, and now lives on the farm and works in Mars’ horse breeding program while also competing at the highest levels.

“To me, she’s the next star,” said Upperville’s Jim Wofford, a two-time Olympic silver medalist and widely-respected coach and clinician. “She’s that talented. She has the whole package—talent, the work ethic and the competitive drive.”

Kieffer made her first U.S. team for the Pan American Games last year. The Americans won the team gold medal in Toronto and are a medal favorite at Rio, under the tutelage of David O’Connor, the U.S. coach.

“The Olympics has always been my dream and my goal,” Kieffer said. “I’ve been working for this for a long, long time.”

She’ll ride a 16-hand Dutch warmblood, Veronica, in Rio, a horse she first began competing on five years ago. “Certain people and certain horses just click,” she said. “It takes time to get used to each other, but we were off and running pretty quickly.”

They’ll both be at the Land Rover Great Meadow International, which Kieffer described as “a really cool event. They’ve built a fantastic facility with good people running it. It’s a huge deal to have it there. It shows how much eventing is growing on this side of the water.”

(Opening ceremonies are July 8, show jumping and dressage July 9 and cross country July 10. Tickets are on sale at greatmeadowinternational.com or 540-253-5000.