Jim Wofford Had Quite an Olympic Ride 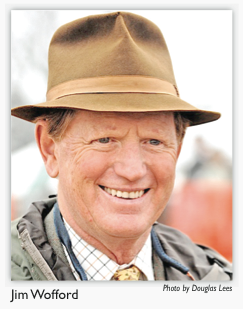 Middleburg’s Jim Wofford won a team silver medal from the Mexico City Olympics aboard Kilkenny in 1968. Over his illustrious career, Jim won team silver at the 1972 Munich Olympics, individual silver at the 1980 Fontainebleau Alternate Olympics, individual bronze at the 1970 World Championships and team bronze at the 1978 World Championships. He’s also served as president of the American Horse Shows Association and vice president of the USET and been inducted into the U.S. Eventing Hall of Fame. Today, he travels the country as a highly sought-after clinician and coach. This article first appeared in The Practical Horseman.

The last time the U.S. Army fielded an Olympic equestrian team was 1948.

By the 1952 Olympics in Helsinki, Finland, the Olympic equestrian team was a civilian operation. The U.S. Army had mechanized in 1949, which meant the cavalry was disbanded. In 1951 the USET was formed “to train and field teams for international equestrian competition.”

My father, Col. John W. Wofford, was the first president of the USET, as well as coach of the eventing and show-jumping teams. He must have been a busy man. The team training center in those days was at my parents’ Rimrock Farm in Kansas.

In the summer of 1952, we boarded a special train in Junction City, Kansas, and I remember riding it to a siding at Fort Riley, where the horses and equipment were loaded. The three teams left for a European tour leading up to the Helsinki Olympics.

One thing about training teams that has not changed is the continuing need for European exposure before big competitions. The horses crossed the Atlantic on a British cargo ship, the Parthia, and once they got to Europe they traveled by rail, as horse vans were not yet in general usage.

Helsinki was a lovely venue for the equestrian part of the 1952 Games, but given my age at the time, I was far more interested in watching the sinister-appearing KGB agents hustle the Soviet Union’s riders out of a van and into locked stables than I was in the fact that the USET won bronze medals in both eventing and show-jumping.

This was the first instance I can recall of the trend towards the politicization of the Olympics, but the Games have never been as pure as their founder, Baron Pierre de Coubertin, would have wanted us to believe.

I wasn’t around yet, but my parents were in the stands in 1936 at the Berlin Olympics when Hitler refused to award the gold medal to Jesse Owens, an African American who won the 100 meters. This trend has continued in various forms with the Communist riots and Black Power protest in 1968 in Mexico City, the Black September terrorists’ murder of the Israeli athletes in Munich in 1972, and the U.S. and Soviet boycotts of the 1980 and 1984 Games.

The Olympic team horses traveled by air for the first time in 1956. This was considered cutting edge, because before that time travel to Europe entailed a lengthy sea voyage. Sea travel continued to be the only option for some horses.

In 1972 Sloopy, Neal Shapiro’s ride on the show-jumping team, had to travel by sea. He had been left behind from the 1971 tour because he had a fit before the plane took off. The extra trouble was worth it, as Neal and Sloopy won an individual bronze medal in Munich.

The USET was understandably reluctant to ship a horse by air that had a history of traveling badly. Markham, Mike Plumb’s ride for the 1964 Tokyo Olympics in eventing, had thrown a high-altitude fit between JFK and O’Hare, and had to be destroyed en route.

The 1956 Olympics were held in Melbourne, Australia, but the equestrian disciplines took place in Stockholm, Sweden, due to the equine quarantine regulations in force in Australia at that time. Stockholm had been the site of the 1912 Olympics as well as the first time that equestrian disciplines had appeared on the Olympic schedule of competitions, so the basic facilities were in place.

Fortunately, by 1956 I was housebroken, so the police did not have to chase me away from the base of the tower containing the Olympic torch. My middle brother, Warren Wofford, was the reserve rider for the U.S. show-jumping team, and I was too busy fighting with him to get into too much trouble otherwise.

The 1956Olympics used the same equestrian stadium that had been constructed for the 1912 Games. This is a very warm, intimate brick structure, and when the stadium was once again used for the 1990 World Games, I went to the same seats we had in 1956 and sat there for a moment and thought about all the wonderful horses and riders I had watched in that stadium.

I’ve seen horse sports change over the past 60 years, and not always for the better. Yet, I feel sorry for people who have not been involved with horses as I have been, because I have truly been blessed.

Yes, changes have occurred, but the people involved retain their love of horses, and the horses remain the same wonderful creatures they have always been. They inspire us, and they make us better, just for our being around them.