Event rider Jan Byyny literally had her world come crashing down around her when she had a bad fall on a cross-country course in February 2010. The owner of Surefire Farm in Purcellville and a very accomplished rider who had represented the United States at numerous international competitions, Byyny was competing in Georgia when the accident happened. 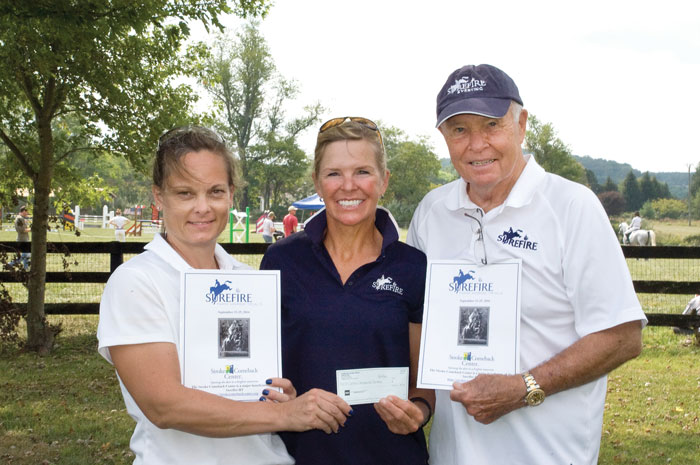 Christy Stauffer, Jan Byyny and Richard Byyny showing a check made out to the Stroke Comeback Center.

She was taken to a hospital in Augusta with a shattered wrist, but tests showed she also had some bleeding on her brain, so she could not be put on a blood thinner to reduce her risk of stroke. Caught, as her brother Richard, an emergency room physician in Colorado, said, between a rock and a hard place.

A few hours after being admitted, while talking with her doctor, Byyny was suddenly unable to speak, her mouth forming words but no sound coming out. She was 42 years old and had suffered a stroke.

Silvio Pappalardo on He’s My Rock.

When Byyny was able to return home to Virginia, she learned about the Stroke Comeback Center in Vienna through the National Institutes of Health, met Executive Director Darlene Williamson and started working with therapist Melissa Richman. According to their website, the Stroke Comeback Center is a community-based nonprofit organization that provides programs for stroke and brain injury survivors and is the only center of its kind in the Washington, D.C., area.

Byyny’s condition was diagnosed as apraxia and primarily affected her ability to speak, though it also resulted in a lack of feeling on her right side. Through intensive therapy at the center and with countless hours of help from her boyfriend, Tom Finnen, and parents, Dick and Jo Byyny, she slowly relearned how to consciously shape her mouth and tongue to form the sounds that make up our language, something the rest of us take for granted.

Within a year, Byyny was back competing at the highest level of her sport, finishing third at the U.S. National Championship at Fair Hill, Maryland, in the fall of 2011, winning Fair Hill International in 2013 and placing seventh at the Rolex Kentucky Three-Day Event in 2014, which short-listed her for that year’s World Equestrian Championships.

Today, her speech is still not perfect, but Byyny has no trouble getting her thoughts across, maintaining a busy lesson schedule, managing a barn full of her own horses and horses in training, and directing several employees at Surefire Farm.

This year, grateful for the help she received from the Stroke Comeback Center, Byyny decided to give back, to help the center help others, and donated a portion of the proceeds from her spring and fall horse trials.

“Although the horse trials are not really a money-making venture,” Byyny said, “we felt it important to try and do what we can to support the center. The whole Surefire Horse Trials Organizing Committee [has] been so supportive of the idea. The sport of eventing means a lot to me and is an important part of this community. I felt it was important to give back to the center because they made such a difference in my life.” ML