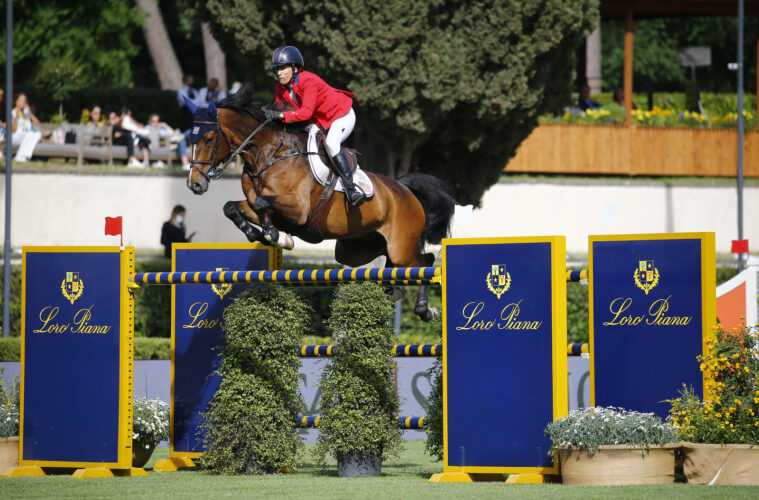 Virginians Head To The Olympics With A Village of Support

Virginians Head To The Olympics

With A Village of Support

“To see your flag and hear your national anthem, there is nothing else like that,” Bonnie Jenkins, Executive Director of the United States Equestrian Teams Foundation (USET), says. “And I think any athlete would agree. To bring medals home for your country, it’s pretty special.”

Best described as the philanthropic partner of US Equestrian Teams, the USET Foundation was established in 2003 with a fixed focus on fundraising. “At the time USET, which had always done the fundraising, transitioned into a formal foundation to continue the fundraising work for high performance,” Jenkins says.

“The first reason to split the two, the management of the teams, athletes, and the horses from the fundraising, is you get a more professional job from each,” McNerney says. “You get two boards and more people involved. The second reason for the split … is it became a better governance standard.”

The repositioning of US Equestrian and USET Foundation created clear objectives for each side while retaining a close working relationship with positive results. “The proof is in the pudding,” McNerney says. “The fundraising has more than doubled on a yearly grant basis and is continuing to grow. It has the virtue of being both good governance and more effective.”

“It’s a great relationship and it serves the sport very well,” Jenkins says.

That road begins with providing the financial support to develop young riders, a part of the Foundation’s work that McNerney describes as “critical. Maybe the most important thing we do.”

As an athlete in the 1976 Olympic Games and current US Show Jumping Chef d’Equi- pe, Robert Ridland has seen his share of rider development and explains how the USET Foundation-funded Pathway Program, for example, is an essential element.

“These riders and these horses are part of a long process,” Ridland says. “The major function of the program is the pathway to get there for younger riders of various levels … We aren’t only supporting top riders, we are preparing the riders for the next championship and the next competition. If we are not invigorating that pathway of athletes that are going to be competing in the Olympics seven years from now, we aren’t doing our job.”

“The USET Foundation’s support of the Pathway Program develops the athletes and develops the sport to make us more competitive,” McNerney says. Becoming more competitive is “all-consuming,” Joe Fargis explains, a 1984 Olympic Show Jumping Gold Medalist and Middle- burg resident. “It’s constant and as repetitive as practice can be,” he says. “You have to immerse yourself in it if you want to get better. It takes all day long, seven days a week, 365 days a year.”

With nearly four decades in equestrian competition under her belt, a recent second place in the Rome Grand Prix, with Tokyo on her horizon, Laura Kraut has certainly put in the time and experienced firsthand the support provided by USET Foundation funding over a long career.

“When you’re at the level of competing internationally and jumping for the United States, [the Foundation] is there in every way,” she shares. “Support staff with logistics, veterinarians, team physios, they are there from start to finish making it as pain-free as possible so the athlete can concentrate on what they need to do.”

A major part of the Olympics or any competition is taking care of horses in transit, a task that requires a huge logistical effort and serious funding. “A lot of our funding is to make sure those horses fly comfortably and safely with their veterinarians,” Jenkins says. “These horses are top athletes too. And then with eight disciplines, it’s not just a show jumping team. You could have eight teams going abroad to represent us.”

Kraut shares that USET Foundation’s financial aid sets the US apart in a big way. “I think we are the envy of the international jumping world … We are very fortunate that the people helping us are fantastic, and in the end, it really makes a difference.”

“It takes an awful lot of preparation in your life and in your team’s life,” Ridland says. “And of course, it is a parallel path for the horse as well. That is where the USET Foundation comes in … Many countries have their Olympics subsidized by government subsidies and we don’t. We couldn’t exist without the USET Foundation.”

Much more than dollars and cents, the fundraising efforts of the USET Foundation speak to a uniquely American patriotism and a camaraderie in the equestrian community.

“Our support is sort of grassroots by its virtue, and by the efforts of Bonnie and the board, it engenders a team effort,” McNerney says. This fashion of fundraising not only builds a team dynamic, it also creates a unique life cycle for the athletes and highlights a personal bond shared by many of the donors.

“When you have to go out and find the money, you not only appreciate it, like in the case of Laura, [you take] advantage of it,” McNerney says. “And there’s this life cycle that when she gets to the top, she wants to reach back because she knows there are others embarking on the same journey she was on, and that it wasn’t easy. I don’t want to say that team dynamic doesn’t exist in other countries, but it exists for sure in Americans, both horizontally at any event and vertically [between] generations.”

Passion for the sport combined with patriotism breeds a special connection for the donors as well. “Most of our major donors have either participated themselves in the sport at some stage in their lives, have family involvement, or own the horses themselves. There is almost always a connection,” McNerney says.

“I would put patriotism near the top of the list for donor motivation,” Jenkins says.“Not just in the major gifts program, but also our annual support program. They are truly part of the team too.”

Patriotism is perhaps most apparent during an Olympic year, but Ridland, Kraut, Jenkins, and McNerney agree focusing on the future is equally important for a sport that never stops moving. “It’s a never-ending cycle in a very exciting way … It is fascinating to see where the sport was, where it is and where it will go,” Ridland says. “And we take our roles seriously as stewards of the sport, to put it in a better place 20 or 30 years from now.”

As the sport progresses, so too must the financial support, never losing sight of that patriotism. “Because the future is constant, the requirement is constant,” McNerney says. “There’s an arms race on all those things that add up to competitiveness.”

To cushion that constant change, the USET Foundation is building up its endowment in addition to the cyclical nature of giving that supports annual competitions and training. “Bonnie is really focused on creating and strengthening our endowment, which is stretched out over multiple years,” McNerney says. “That enables us to get through rough spots.”

According to Jenkins, McNerney’s role is key as well. “As our leader, Jim has been on the frontlines of building that endowment, which has made a huge difference to the organization. It’s now at 20 million. When Jim started, it was closer to six million. That was a huge achievement.”

Wherever the contribution is directed, whether it be annual giving for a particular discipline or toward the endowment benefiting the whole team for years to come, every penny counts. “I don’t think Bonnie or I want to create the impression that the smaller or medium-sized gifts aren’t critically important,” McNerney says. “They are. We equally celebrate and appreciate all levels of donors because they bring the same patriotism and love of the sport. It all adds up, making the country better in the sport.”

And many of those donations, big and small, come from the Middleburg area. A few loyal friends of note include Jacque- line B. Mars of The Plains, and Honorary Life Trustee of USET, Sheila Johnson, whose daughter, Paige, won USET’s Maxine Beard Award. Finally, Barbara and David Roux of St. Bride’s Farm who are not only supporters of the Foundation but also own Laura Kraut’s horses, Baloutine and Confu. Laura Kraut will be riding Baloutine at the Tokyo Olympic Games.

“The Middleburg connection to our sport is a big deal,” McNerney says. “There’s a deep cultural connection to the sport, and a number of wonderful supporters live in Middleburg.”

For Tokyo and beyond, it is obvious that the support of the USET Foundation is the secret of the team’s success. From creating opportunities for youth riders, funding domestic and international competition preparation, and building an endowment to secure the sport’s future, Kraut and Ridland describe the Foundation’s purpose best.

“USET Foundation helps us have that camaraderie, and they make us feel like we are doing something important,” Kraut says. “This is a very individual sport … but they make us realize that there is more to the sport than just being an individual. And there is a lot to be said for being part of a team and winning on the international stage.”

“I can’t emphasize enough how crucial the Foundation is to us being able to compete at the highest level of our sport,” Ridland says. “And we as Americans are privileged to have the Foundation leading the way.” ML

The USET Foundation was established in 2003 as a not-for-profit Section 501(c)(3). It is a separate organization from US Equestrian, the National Governing Body, and serves as its philanthropic partner. The Foundation’s mission is to raise tax-deductible contributions to support the nation’s High-Performance athletes and horses through grants made to US Equestrians. Donations may be made through uset.org.

US Equestrian develops, selects, equips, promotes, and manages US equestrian teams, as well as provides funding through corporate sponsorship, membership dues and fees, and USOPC support.