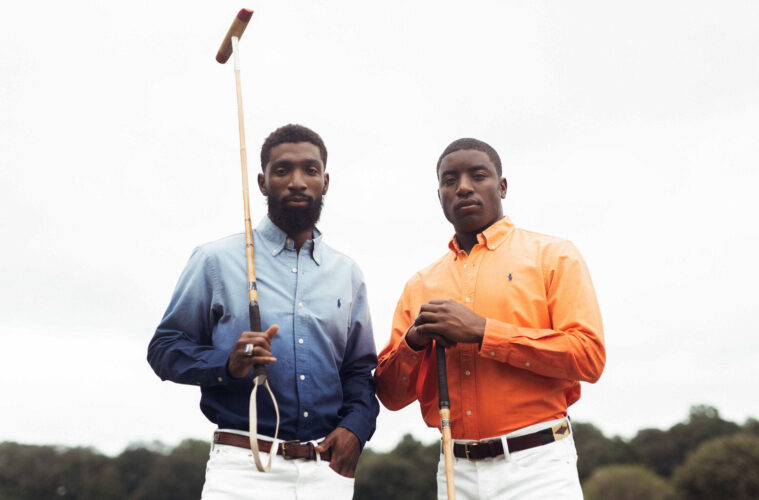 CROSSING THE LINE WITH THE ROSSER BROTHERS

Crossing The Line with the Rosser Brothers

Written by Victoria Peace
Photographed by Pablo Raya
Creative Direction by Jennifer Gray
Assisted by Sophia Kedzierski and Maureen Koepke
Clothing provided by Ralph Lauren
Special thanks to Aleco Bravo- Greenberg and his wife Sandra for hosting Middleburg Life and our featured guests for this photoshoot at Rutledge Farm (circa 1740) located in Middleburg, Virginia. It is currently listed for sale.

“Just go for it.”
That was Kareem Rosser’s advice when asked what he would say to young kids considering polo. “Don’t be afraid that it will be intimidating because you feel like you don’t fit in or that it’s only for wealthy and privileged people,” he said. “Get on and ride — you do belong.”

Kareem and his brother Daymar have been rising stars in the polo world ever since winning the National Interscholastic Polo Championship in 2011 for their team Work to Ride. They receive invitations to play all over the globe and have participated in several prestigious matches in Middleburg. Last month, they were featured in the Virginia United Polo League’s “All-Pro Polo” match at Great Meadow. In February 2021, Kareem published his inspirational memoir “Crossing the Line,” which is making waves throughout the polo community and beyond. However, they weren’t born into this life.

Growing up in “the bottom,” an inner-city Philadelphia neighborhood plagued with high crime and poverty rates, Kareem and Daymar lost friends and family members to gun violence early in their lives. Many of their peers were caught in the dangerous world of drug and gang-related activities, which often led to incarceration and sometimes death. Lezlie Hiner, their riding instructor, made the teens promise that if they received the opportunity to leave the bottom, they would “get out and stay out.”

Kareem and Daymar were first introduced to horses when their older brothers David and Jabbar stumbled across Chamounix stables while taking a bike ride. Tucked away in Fair- mount Park, just outside of downtown Philadelphia, the stables are home to the 501(c) (3) non-profit Work to Ride. Founded in 1994, Work to Ride aids disadvantaged youth through constructive activities centered on horsemanship, equine sports, and education. In exchange for helping out around the barn, kids from some of the most impoverished communities in Philadelphia participate in riding lessons free of charge.

The founder of Work to Ride, Lezlie Hiner, grew up around horses but was never a polo player. But when she took a couple of kids to the program to groom at a match that her friends were playing in, it instantly sparked their interest. Using an old soccer field near the stables as a polo field, the Work to Ride polo team was born and gradually evolved into today’s robust program.

While Work to Ride is best known for its polo program, it also offers kids the chance to participate in schooling shows, steeplechase, foxhunting, and gymkhana (speed pattern racing and timed games for riders). Kareem remembers being invited to hunt with the Cheshire Hunt through Lezlie’s connections. He emphasized that while it is a very different type of riding than polo, a good run in the field can be a refreshing change because instead of strategizing about how to score a goal, you can focus on holding on and having fun.

When David and Jabbar first started in the Work to Ride program, Kareem and Daymar were too young to participate. However, at ages 8 and 6, they were finally allowed to follow in their brothers’ footsteps and learn to ride. Before joining the older kids on the polo field, Kareem and Daymar had to master basic horsemanship and riding skills. In his book, Kareem offers several amusing stories about the quirky and spirited horses and ponies that made them into the riders they are today. One such horse was “Buck,” aptly named for his uncanny ability to get kids off his back without warning.

As their polo skills improved, Kareem and Daymar began to participate in local games and tournaments. At first, they lost. A lot.

Although Work to Ride had provided them with many incredible opportunities, they realized they were at a distinct disadvantage after matchups with opponents from outside their barn. The horses at Work to Ride were mostly donated or rescued and often came with behavioral issues. Their equipment and practice facilities were not up to date, and unlike other teams with indoor arenas, they could only play when the weather was nice.

But this didn’t stop the Rosser brothers from slowly gaining a national reputation for their skills on the field. What started as a string of brutal losses turned into close matches, and eventually, victories. Both Daymar and Kareem were offered polo scholar-ships to attend Valley Forge Military Academy, a prestigious high school, located 45 minutes outside of Philadelphia.

In 2011, Kareem, Daymar, and their friend Brandon Rease won the National Interscholastic Polo Championship held in Charlottesville, Virginia, on behalf of Work to Ride. Kareem recounted that “for many years we spent a lot of time just losing — each year as we started to progress and go through our high school years, we were getting closer and closer to winning, but we would always fall short. So to finally reach that big moment and succeed was an incredible feeling.” It was also “an incredible moment for Lezlie because she could finally see her mission in action.”

After Kareem’s graduation, Daymar, Brandon, and teammate Julia Smith repeated the feat in 2012. Daymar explained that their goal was to “keep what they did the previous year going” and keep Work to Ride on the map.

After graduation, Kareem and Daymar continued their successful polo careers in college. Kareem attended Colorado State University, where he was a member of the varsity polo team. In 2015, when the team won the Intercollegiate National Polo Championship, he was named U.S. Polo Association’s Intercollegiate Player of the Year. Daymar attended Roger Williams University in Bristol, Rhode Island, where he co-founded the polo team in 2016. Just one year later, Daymar captained the team to victory in the 2017 Intercollegiate National Polo Championship, earning them the national title.

Today, Kareem and Daymar once again call Philadelphia home. With demanding careers in finance and marketing and busy personal lives, it is often difficult for them to find time to get to the barn. According to Kareem, who also serves on the executive committee of Work to Ride’s board of directors, “We ride when we can.”

In the future, Daymar and Kareem hope that more Black and Brown children will be inspired to start playing polo. They acknowledge that the sport has a reputation for being insular, stratified, and lacking in diversity and that significant financial barriers to participation exist, including the cost of horses, equipment, lessons, and entry fees for tournaments and matches. However, the brothers hope that some of these barriers can be broken down through programs like Work to Ride. While “horses are expensive and there is no way around that,” Kareem stressed that there are ways to make it more accessible” for kids from all types of backgrounds.

Work to Ride is currently raising funds to expand its operations in Philadelphia. The immediate goal is to refurbish the existing facilities and construct a new indoor arena. This will allow them to extend their programming year-round, increase participation, and host local, regional, and national polo matches. Eventually, Work to Ride aims to expand its operations to other cities.

According to Daymar, one reason that the Work to Ride model is so successful is that horses are extremely therapeutic. They can help kids cope with the trauma of growing up in violent or unstable homes. Horses immediately make people feel comfortable — you can talk to them and relate to them even though they can’t talk back. Daymar gives voice to a feeling that many riders can relate to, “when you are feeling down, horses can help you come back to life.” And it’s not just the horses and the riding — according to Daymar, the stable work is also an essential aspect of the healing that comes from being at the barn. In the future, Daymar hopes to open a therapeutic riding facility to spread these positive benefits to people in need.

In places like Middleburg, it can be easy to think that equestrian culture only exists within the confines of lush, rolling green pastures and that polo is only played on immaculately groomed fields with gleaming, well-trained ponies. Kareem and Daymar’s journey with Work to Ride, and the Work to Ride mission is an important reminder that there is a whole different side to the sport outside of this carefully curated aesthetic.

In Kareem’s book, he touches on one fascinating example of horsemanship in the inner city — the Black urban cowboy culture in Philadelphia. It’s a little-known fact that there are thousands of horses living in the city. Many have been rescued from auctions where they would have been sent to slaughter or have been bought off the track. The urban cowboys consider themselves ranchers, and according to Kareem, “they have a great sense of community.” Using the limited land available to them, they teach horsemanship skills to local children and occasionally hold impromptu races and competitions. Some of the kids at Work to Ride sought out the program after the urban cowboys piqued their interest in riding.

Despite their busy schedules, Kareem and Daymar will be returning to the Middleburg area soon. Kareem will teach a polo clinic in mid-July on behalf of the Windy Hill Foundation, a program that provides safe and affordable housing to low-income families in Fauquier and Loudoun Counties. Daymar will return in the fall to play in the National Sporting Library and Museum’s annual Polo Classic.

For the cover shoot, Kareem and Daymar are styled in Ralph Lauren clothing. According to Kareem, “we have a great relationship with Ralph Lauren” and have been fortunate to participate in many campaigns. He and his brother have “no aspirations to be supermodels,” but reiterated that “it is neat to be able to participate where and when we can.”

To anyone out there thinking of trying polo after reading this article, go for it. At first, you might think you don’t belong. How- ever, in the words of Kareem, the captain of the first all-Black team to win a National Intercollegiate Polo Championship: “You’d be surprised.” ML

Interested in donating to Work to Ride and learning more about their mission and programs? Visit worktoride.net.
This article first appeared in the July 2021 Issue.