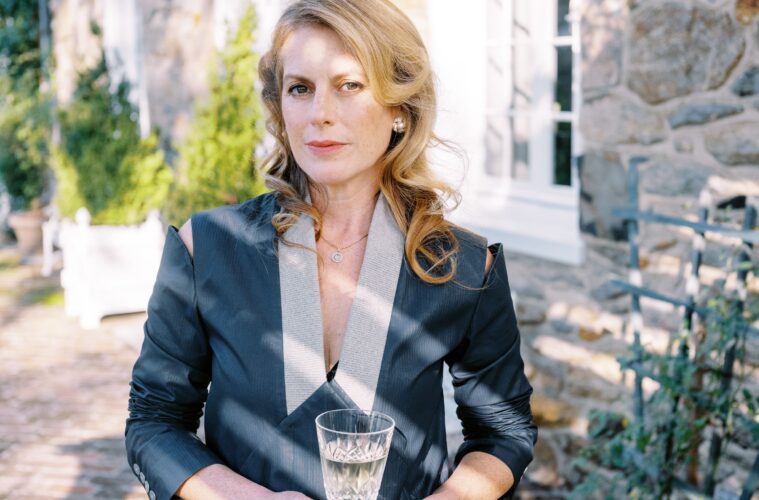 A Female Vintner Whose Story Begins in Virginia Goes Bi-Coastal

“It’s like breathing for me … it’s almost involuntary. I’m a vintner and it’s so a part of who I am,” – says Rachel Martin of Oceano Wines and formerly of Boxwood Winery.

For Martin, her love of all things wine started as a family affair that has resulted in a bi-coastal business model and lifestyle with stops in New York, San Luis Obispo, and of course, Middleburg. As she works to expand West Coast-based Oceano Wines, she reflects on her Middleburg beginnings that helped her find a passion, master an industry, and even get married.

For many of Martin’s pursuits, the inspiration starts with family. The same holds true of her connection to Middleburg, where in November 2001 her mom Rita Cooke and stepdad John Kent Cook had purchased Boxwood Farm and asked Martin to visit and share her thoughts before the deal was final. Martin remembers describing the property as a “magical place, like a fairytale” that would not only be an idyllic home but also offered the potential of a new business venture.

“Jon, my stepdad, it was his idea to plant the vineyard and build a winery,” she says. “And, he asked me if I would be involved and if I would run the company for him.” Though Martin’s background was photography, with fine arts degrees from Tufts University and The Museum School of Fine Arts in Boston, she jumped at the opportunity for a career change.

“When Jon asked me to be a part of this new vision, it didn’t really take much for me to say, ‘yes,’” she says. “It seemed like an absolutely perfect change for me because I’ve always loved wine, I love everything about wine. I love the provenance of wine, I love the culture of wine, and I especially love drinking wine in great company.”

To help build what would become Boxwood Winery, Martin went back to school to learn the behind-the-scenes of the business. “Thankfully, during the process of choosing the vines, siting the vineyard, and building the winery, there was time,” Martin says.

Her education started in California at Napa Valley College, and later in France for a more immersive experience. “I went to school in Napa first, for oenology and viticulture … it’s a wonderful program for people who are working at vineyards and wineries who want to get a degree or further their education,” she says. “It’s very accessible.”

Of her continued studies in France, she says, “I went to France’s University of Bordeaux School of Oenology. I finished school in Bordeaux and it was a diploma of Dégustation du vin, so a sensory evaluation program which is very intense.”

She finished her schooling in 2005 just in time to return to Middleburg and continue her education building Boxwood Winery, which opened the same year. Martin says, “I went to school to understand the process because my position here at Boxwood was Executive Vice President. I was in charge of grape growing, wine production, distribution, retail, packing, and like you name it. We were a new company and we were still learning as we were going and building as we were going. So, there was a lot of opportunity for me to learn how to build a wine business.”

Martin stayed with Boxwood Winery, working with her stepdad, mom, and brother Sean Martin, from 2005 to 2018. During that period she developed skills necessary to start her own venture, and met two figures crucial to her career expansion, viticulture consultant, Lucy Morton, and future husband and Oceano business partner, Kurt Deutsch.

Of Morton, Boxwood’s viticulture consultant since inception, Martin says, “Lucy is local to Virginia, but she’s an international consultant as well. So [she] really set me up super well for success.”

As for her husband, Martin shares, “I was on the founding board of the Middleburg Film Festival and I was really excited to be part of it. My husband, he produced the opening film for the 2014 festival and, maybe it wasn’t random, maybe someone had ideas, but we were seated across from each other at a table having never met before.” The pair started as friends with a common interest in the arts, before Deutsch asked Martin out in 2015. She remembers, “I was in New York selling Boxwood Wine and he asked me out … We were just so comfortable with one another that it was very natural.”

Martin says their relationship and their pathway to business partnership blossomed on a family trip just a few months into dating. She remembers fondly, “I knew Kurt was a phenomenal person when we all went on a trip for my mom’s 80th birthday with 17 family members. I said, ‘It’s going to be lots of family and kind of intimate,’ but he said he would love to come.”

Not only a milestone for the budding romance, the trip also proved significant for Martin’s business planning. She retells the story of how the seahorse became a mascot for her relationship and, later, part of Oceano’s branding.

“We’re scuba divers, and on one of the first dives in Virgin Gorda we saw a seahorse,” she says. “It’s very rare because they are so small and they’re masters of disguise. They change to their environment and they mate for life. So even before we had the wine company, the seahorse was emblematic of our relationship and we would see it everywhere.”

Naturally, as the relationship solidified, Martin would meet Deutsch’s friends and family too, and make a connection seemingly as impactful as the scuba trip. “After Kurt and I were established, I started to meet his family, and he introduced me to Henry Warshaw, the owner of Spanish Springs Vineyard … it’s in San Luis Obispo, all the way on the coast,” she says.

Warshaw invited Martin to visit Spanish Springs in 2016, an opportunity she couldn’t resist. She recalls, “I am always game for an adventure … and there was just something about this that [I felt] I had to investigate at any cost. I was just so taken by the vineyard. I did an inquiry about the soil combination, the climate, and the different clones of each grape variety. I said to Henry, ‘I want to contract for six tons of Chardonnay.’ I just had a vision and I just saw the future in that moment.”

With a vision in mind, Martin asked then-boyfriend Deutsch to join her in building Oceano Wines, a process that would bring “it all full circle,” notes Martin. Oceano takes its name from Spanish Springs’ proximity to the ocean, making Martin’s beloved seahorse an appropriate part of the branding.

Additionally, Boxwood’s Lucy Morton connected Martin with winemaker Marbue Marke, who would take Martin on as a client. Of that meeting Martin shares, “We got along smashingly and we had the best time. So we signed a contract and he became our winemaker.” The pair started with one very Californian varietal, Chardonnay.

“I knew I could make an amazing Chardonnay from this place,” she says. “But more than just making amazing wines, I could make a wine that people were looking for. I knew a California Chardonnay didn’t have to be oaky, heavy, or high alcohol, that it could be more food-friendly, more people-friendly.”

In 2016, Marke used Martin’s grapes to make the Oceano Wine Chardonnay. “We’re in a special enclave where we can make wines that are mature, that don’t have that high of an alcohol content … It’s just refreshing and vibrant, and you’re not going to pay for it later,” Martin describes. Martin followed up with a Pinot Noir in 2018, the same year she married Deutsch.

Though her process is distinctly California, using grapes grown in San Luis Obispo and turned to wine in Napa, the final product finds its way back to her Middleburg home. “Our Chardonnay showed up at the 2017 Middleburg Film Festival,” she says. And the new business has more plans to pop up in Hunt Country in the years to come.

“We’re launching a vintage VW bus, mobile tasting room for Oceano,” she says. “It’ll start on the East Coast because I want to try it out close to home. So we’ll do private events at people’s homes, luxury events at places like Salamander. I am a bi-coastal person and there’s no reason I can’t bring the west coast to the east coast in a really cool vintage VW.”

It’s no surprise that Martin would bring her new venture back to Middleburg where it all began as she feels, “very connected to the area.”

“I started my career here at Boxwood, I have a huge network of family and friends here, and I just love the area so much,” she says. Though she splits her time between California, New York where she lives with her husband, and Middleburg, she plans to spend more time here in the coming months and bring Oceano with her.

“I’ll be back for the fall races, the film festival, and the Christmas Parade,” she says. “So I’ll do pop-up wine tastings in local boutiques. Actually, I’ll be at Tully Rector on December 4th, serving and selling wine, come find me there.” ML