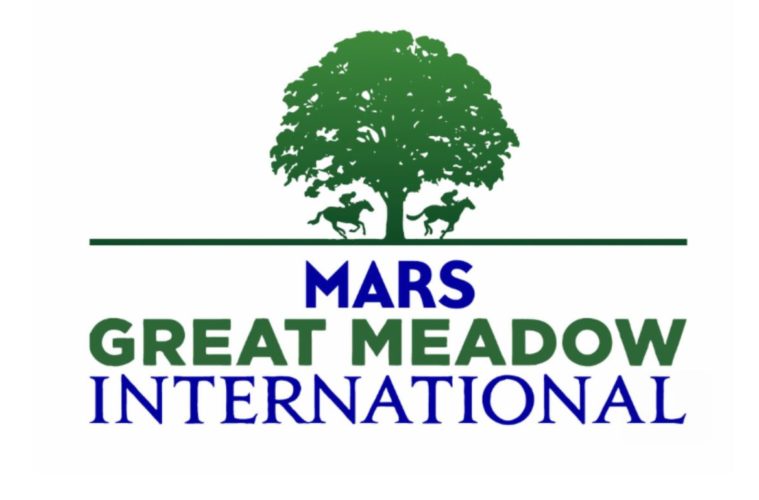 The Mars Great Meadow International is pleased to partner with PEDIGREE Foundation, an organization dedicated to helping animal shelters find loving homes for dogs, and the Middleburg Humane Foundation, a local organization that provides a haven for abused and neglected animals, both large and small. The Mars Great Meadow International CIC2, 3 and 4*-S occurs in the Plains, August 22-25, 2019.

Now in its 5th year, the Mars Great Meadow International (Mars GMI) has been repackaged into a larger competitor and spectator-based event offering three levels of international equestrian competition. In addition to the equestrian competition, the 2019 GMI will highlight all things related to our canine companions. Leashed dogs are welcome and can enjoy amenities including a “MARS EQUESTRIAN VIP venue” – “Very Important Pet” cooling tent with swag, treat samples, and more. “Offering a space dedicated solely to the well being of our canine companions is part of our purpose to create a better world for horses, pets, and the people who love them,” said Dr. Bridgett McIntosh, Director of Mars Equestrian. Other additions to the event schedule include canine demonstrations and dog-friendly programming and educational events for the whole family.

“Committed to helping animal shelters and rescue organizations find loving homes for dogs in need, PEDIGREE Foundation is a perfect non-profit partner for the revamped Mars Great Meadow International. Now that MarsGMI is dog-friendly, we want to support this fantastic organization that does so much for homeless dogs and the shelters who take them in,” said Darrin Mollett, the organizer of Mars GMI.

“Middleburg Humane is a fixture in our community and has worked tirelessly to support dogs, cats, equine, and livestock. Thanks to generous donors, MHF has opened an expanded shelter on 23-acres on the western end of the Town of Marshall,” continued Mollett, “Through its partnership with MHF, MarsGMI hopes to bring more donations and support to this local shelter.”

A portion of MarsGMI proceeds will go to both organizations. In addition, visitors who bring donations, such as pet food or other shelter supplies to the event will receive free admission to the event, which occurs over four days.

“PEDIGREE Foundation is honored to partner with Mars Great Meadow International and Middleburg Humane Foundation on this event,” said Deb Fair, Executive Director of PEDIGREE Foundation. “This opportunity allows us to gather the community in a fun and pet-friendly way and, together, highlight the millions of dogs in search of loving homes.”

“With a 50-mile geographic service area, we now have the accommodations to continue to meet the needs or our existing clients, while expanding our programming to serve others,” said Melanie Burch, Director of Development for The Middleburg Humane Foundation. “Partnering with MarsGMI will bring awareness to our mission, and, hopefully, bring us over the finish line with additional donations and contributions to our new shelter.” 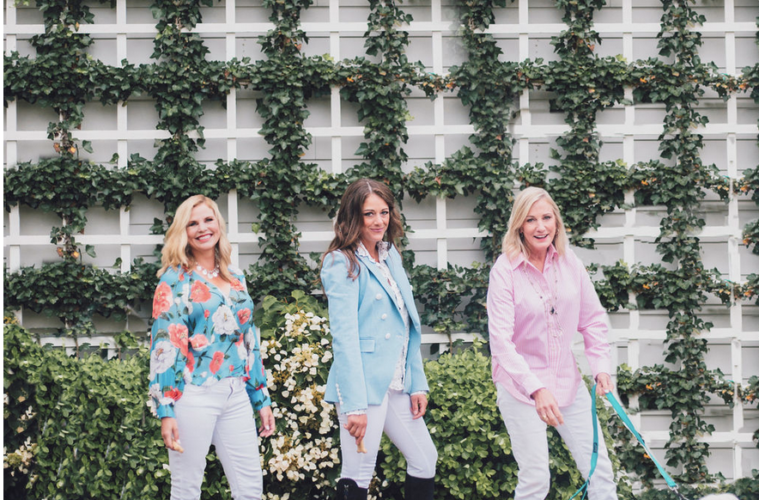 Great Meadow International —Something for Everyone: Equestrians, Spectators, even the Family Dog

Great Meadow International, a four-day equestrian event, will bring the hills fully alive August 22-25 at Great Meadow in The Plains. Now in its fifth season, this annual event offers three levels of international competition featuring Olympic-level riders and horses in what can be described as an equestrian triathlon (dressage, show jumping, and cross-country).

But this year, Great Meadow International (GMI) has broadened its vision from its first event in 2015. Five Rings Eventing (FRE), founded by Darrin Mollett of Beverly Equestrian and Olympian David O’Connor, is a high-performance event organizer and management company that has led the competition side of GMI since its inception; but this year, Five Rings is managing all aspects of the event. Mollett added, “Our vision for 2019 is to produce a festival atmosphere to enhance the spectator experience and the community flavor of our event. We’ll be a family-friendly, country festival with a special focus on everyone’s best friend—dogs.”

Another change this year is increasing the GMI from a three-day to a four-day event, which will include a fall festival featuring Meadow Market, a charming vendor village with a beer garden, a tent where people can cool off, local food trucks, live music, and entertainment. Organizers are planning for dogs, too, including demonstrations, dog agility activities, and canine treats. There will be a large tent open to everyone overlooking the main arena. Guests can take their food there and get out of the sun. Nearby will be the Mars VIP Hospitality Pavilion for guests who prefer all-inclusive dining and a full-service bar in a private setting; tables and half-tables are on sale for this pavilion venue. For those who want to be close to the action, a variety of tailgates and ringside boxes are available with a cash bar and access to local food trucks.

Mars Equestrian™, a division of Mars, Incorporated, is this year’s title sponsor, which falls in line with the organization’s canine focus including dog food and treats. A statement from Dr. Bridgett McIntosh, Director of Mars Equestrian™, confirms their support, “Offering multiple levels of [equestrian] competition in a community-focused event, with pet-friendly activities for fans, creates the ideal intersection for Mars, Incorporated’s diverse portfolio of brands. Ultimately, the partnership with GMI is central to our purpose to improve the lives of horses, pets, and the people who love them.”

The equestrian competition portion of GMI has also expanded in scope. With an expected attendance of 200 horse/rider combinations across the three levels of international competition (dressage, show jumping, and cross-country), this number is up from 35-45 in previous years.

Mollett said the event includes the term “International” because it’s an international level of competition for all three levels, which includes dressage on Thursday and Friday, show jumping on Saturday, and cross-country on Sunday. “We moved the event from July to August so competitors could prepare for their fall championships; it’s meant to benefit the rider. And the racecourse has amazing footing and a new irrigation system. Plus, we’ll have so much more for the community,” Mollett explained. The rule of thumb is that competitors bring three to four connections. In past years, thousands have come. With over 200 horses/riders expected, scores of spectators will be attracted, plus owners, riders, trainers, and horse enthusiasts from across the country.

FRE’s organizing committee is an all-volunteer group. One volunteer, Max Corcoran, has been on the committee since the beginning. She said, “In previous years, there was just the highest level of the competition; but this year, we’ll have the next level—the intermediate/preliminary level—which opens it up to more riders. There will be different countries represented; we’ll see Canadians, riders from Mexico, Ecuador, Argentina, Australia, New Zealand, England, and Ireland. They’ve come to compete, to ride for their country. It’s such a beautiful facility and a great excuse to come out and enjoy time in the country—not just for riders but for everyone.”

Plans are on track for a portion of GMI’s proceeds to benefit non-profit partners, including the Pedigree Foundation (the non-profit leg of Mars) and the local Middleburg Humane Foundation, which operates a farm shelter in Marshall, Virginia for abused or neglected animals.

For over 30 years, literally millions have come to events at Great Meadow drawn by its natural splendor, a 380-acre field events center and steeplechase course among the backdrop of the rolling Bull Run Mountain range. It began with the Virginia Gold Cup held every May and grew from there. Today, it is home to a laundry list of greats including the International Gold Cup Races in October, Saturday night Twilight Polo from May through September, the Twilight Jumper series on select Friday summer nights, and home to the popular Fourth of July Celebration. It is also the site of public astronomy events hosted by the Northern Virginia Astronomy Club, Team America Rocketry Challenge, and is a favorite pick for seasonal trail rides, weddings, and other community events.

But back in 1982, the property known as Fleming Farm was a failing dairy farm. The late Arthur W. “Nick” Arundel (1928-2011), news executive and philanthropist, spotted the property, which was slated for sale, ready to be turned into a large housing development. But Arundel purchased the property, envisioning a preservation of open space for the permanent home for the annual Virginia Gold Cup steeplechase, and to showcase one of Virginia’s most beautiful natural resources. He donated the farm that would become Great Meadow, stewarded by the Great Meadow Foundation, which was first established in 1984 as the Meadows Outdoor Foundation and renamed Great Meadow Foundation in 1996.

Thanks to the initial vision of Arundel—and since then many more—friends still meet at Great Meadow to celebrate the preservation of this sweeping space and the entertainment it brings. Mollett ended, “And GMI is live-streamed on multiple platforms.” So now even more people can catch the vision of this international event and the wonder of Great Meadow as its prized venue.

GMI tickets include general parking and admission to the venue and Meadow Market. For more information and to purchase tickets, tables, etc., visit www.greatmeadowinternational.com. Great Meadow in The Plains is located at 5089 Old Tavern Road; the phone number is 540-253-9845 and the website is www.greatmeadow.org.

This article first appeared in the July 2019 issue of Middleburg Life. 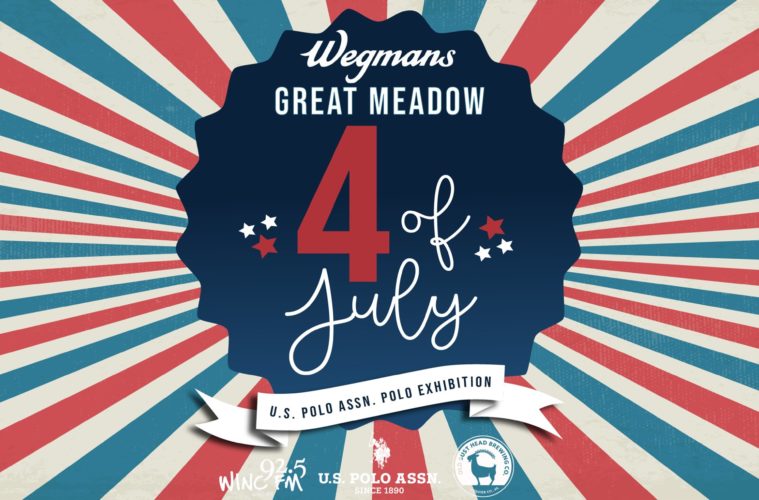 Enjoy a day of fun, family & fireworks at the 2019 Wegmans Great Meadow 4th of July Celebration!

Gates open at 4 PM. There will be a huge variety of children’s activities included with your general admission purchase. To list a few: rock wall for climbing, pony rides ($5), moon bounces, slides, the famous rain machine, lasertag, and more!

Old Bust Head Brewing Company will be on site pouring cold, craft brews. A row of food vendors will be on site serving up everything from BBQ to fried dough to gourmet tator tots.

The grand finale comes at dark with one of the metropolitan area’s biggest fireworks shows!