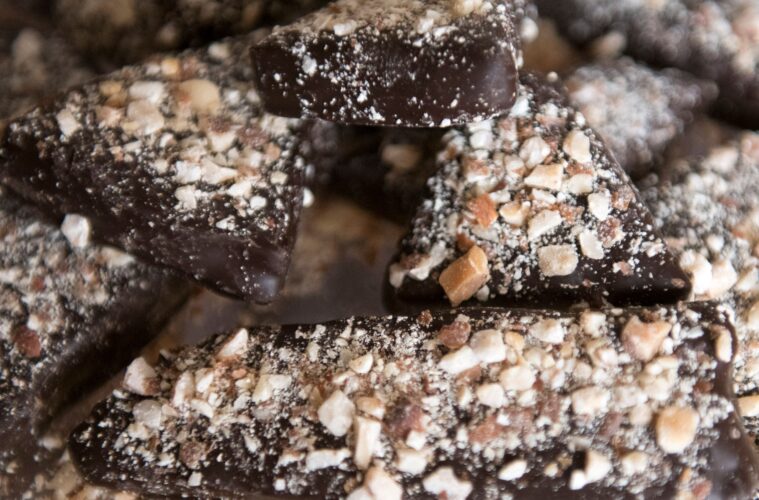 A Sweet Place Opens In Middleburg

Written by Dulcy B. Hooper | Photos by Joanne Maisano

The celebratory grand opening, ribbon cutting, and signage installation are still in the works, but Raymer’s Homemade Candies opened its Middleburg shop in June, a delightful treat for chocolate lovers.

Raymer’s Homemade Candies is a family-run business with its primary location in Doylestown, Pennsylvania. It is owned by Mark and Sue Raymer, “with a lot of support from their children and grandchildren in both the candy-making and operational side of the business.”

In 1967, Mark Raymer, serving as an apprentice to his father-in-law in Fond du Lac, Wisconsin, learned the art of “pan candy.” Pan candies are recipes based on the natural caramelization of fresh cream and sugar, poured into pans or hand-rolled. In 2001, Raymer’s Homemade Candies was launched in its Doylestown location, using the traditional recipes from the late 1880s. As an addition to the original recipes, Raymer uses only pure Belgian chocolate in his creations.

Mark Raymer still does most of the candy-making, with help from son Cory Raymer and son-in-law Kelly Kujath. The Raymers’ daughter, Lisa Kujath, runs the retail portion of the family business, and Cayce Rockhill, whose significant other is Cory Raymer, manages the Virginia location.

With Raymer family members living in the Ashburn area, the business expanded to Ashburn in 2018, opening its local outpost at One Loudoun. That location closed last December, one of the many businesses impacted by the coronavirus.

Rockhill said that she and Cory are enthusiastic about opening Raymer’s Homemade Candies in Middleburg. The Raymer name will be familiar for knowledgeable sports fans: Cory Raymer played in the National Football League for 11 seasons, playing with the Washington Redskins from 1995-2000 and 2004-2005 and with the San Diego Chargers from 2001-2003. He was inducted into the University of Wisconsin Athletic Hall of Fame in 2012. Raymer’s jersey (#52) is prominently featured on one wall in the shop, overlooking a shelf of chocolates.

“We knew we would be opening in another location,” Rockhill said, who managed the Ashburn location and now manages the Middleburg shop. “When we were at Loudoun One, we had a lot of great customers, but the difference is that it was more of a ‘nine to five’ kind of business community. There are a lot of restaurants there, but we found that people didn’t just come for the day to wander around, walk up and down the street and stop into shops the way they do here.”

The chocolates are still made daily in Doylestown, and in another family endeavor, the Pennsylvania and Virginia members of the team meet at the halfway mark to keep the flow of chocolates coming to Middleburg.

“It is a close-knit family,” Rockhill said. “So it’s almost like ‘date night’ — we drive halfway to meet each other, have lunch or dinner and catch up with each other. Then we load up the chocolates to come back here.”

Rockhill said that she and Cory had been coming to Middleburg for several years prior to the shop’s opening. “We dined here, we enjoyed cocktails here, we shopped here. We love Middleburg and appreciated the small-town feeling it has.” The couple felt that this community was “conducive to what we wanted to do — a very natural expansion for us.” Rockhill added that she “likes knowing customers by their first name and knowing what they like — it’s part of what makes this special for me.”

On a recent visit, Rockhill was busy decorating the shop with a fall theme in anticipation of Halloween and Thanksgiving. Raymer’s is beautifully (one might even say “tastefully”) laid out, with an abundance of homemade candies that will beckon to anyone with a love of chocolate. In a nod to the local community’s interests, an assortment of horse heads and horseshoes can be found on a prominent shelf, and visitors can arrange to have wine bottles dipped in chocolate.

Whether to purchase a gift for others or a well-deserved treat for yourself, Raymer’s is well worth a visit. With chocolates of every kind, shoppers can find such fall novelty candies as jelly pumpkins, sour pumpkins, gummy pumpkins, and candy corn. The caramel apples cannot be far behind! ML