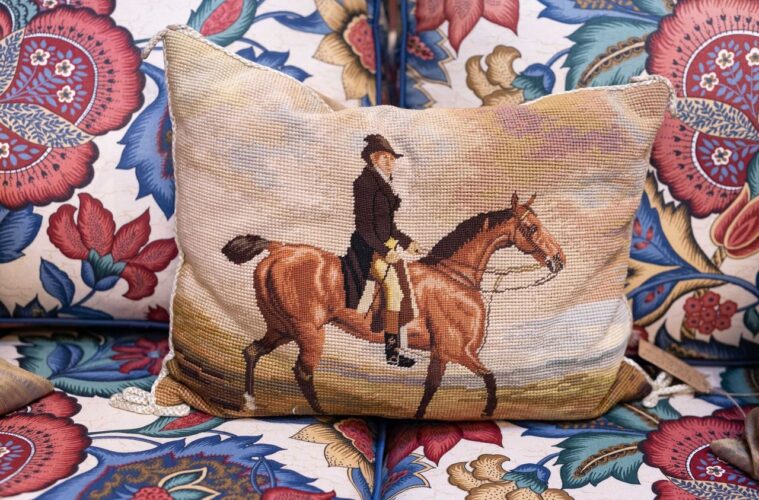 What’s Old is New Again at Another Blue Moon

If Hunt Country is anything, it most certainly is not a place lacking in things to do or see. In addition to pastoral views of the Blue Ridge and Bull Run Mountains, famed foxhunts, and steeplechase races, there is also a vibrant shopping district in the town of Middleburg that keeps visitors coming back for more. With its tree-lined brick sidewalks and 18th-century buildings, historic Middleburg has rows of lively restaurants and boutiques that attract people from all over. This intriguing mix of old and new can be found at Another Blue Moon, a luxury consignment shop in the heart of town. The unique secondhand store offers an assortment of antique and vintage furniture, decorative accessories, collectibles, and home goods.

What started out as a pop-up founded by six friends in 2018 has evolved into the brick-and-mortar retail store you see today on Washington Street. The store is co-owned by longtime friends Kerry Dale and Jennifer Andrews. As people began cleaning out their homes and looking to recycle possessions during the pandemic, Dale and Andrews saw an opportunity to continue the venture. At Another Blue Moon, you’ll find beautiful furniture, vintage mirrors, lamps, tables, rugs, tea sets, and so much more. What makes this boutique so special is that most items come from local homes and friends of the owners. So, when you buy a piece from Another Blue Moon, you’re not only supporting the local economy — you’re also giving back to the community of contributors who have decided to consign their goods here. You’re buying something special from another person’s sanctuary and continuing that treasure’s story.

“We take things that we know customers are looking for and are complementary to our design style and inventory.”

Dale says, “Because of our community and the nature of it, and as the real estate market has exploded, our business has grown too. We added space this year and now have barn space in the basement of the Middleburg Professional Center.” During the pandemic, Dale adds, “Instagram saved us. We would take photos and post them to social media. People would claim their goods online then come pick them up in-store.” Andrews chimes in, “Instagram not only provides an outlet for home shopping and dreaming, but continues to offer comic relief even today. What else could make you laugh about a needlepoint pillow, a Herend cat, or a shapely French chest? We learn something every day about the business and there’s always a fresh challenge around the corner.”

Left: A stack of books perfect for a home office. Center: Dale surrounded by the shop’s many treasures. Righ: Hunt Country accents are in no short supply.

“Many times, people will send me twenty pictures of what they want to consign, but we must curate what we take,” Dale explains. “We take things that we know customers are looking for and are complementary to our design style and inventory. We carry anything from antiques to contemporary to transitional and more traditional goods.” Another Blue Moon also considers whether items are on-trend, the condition they are in, and seasonality as they curate their collection. They will generally hold items for about 90 days, but Dale says they try very hard to sell with a quicker turnaround.

It’s clear how much these two women enjoy the process of building a business together, and their passion for “finding a new life for something that still has life in it” is even more inspiring. But perhaps Andrews puts it best. She says with a laugh, “I feel like I’m in an episode of the Beverly Hillbillies, driving through Loudoun with a van full of old furniture to drop off at a barn. If you don’t love what you do, then why do it?” ML

Another Blue Moon is open Thursday, Friday, and Saturday from 11 a.m. to 5 p.m. and by appointment. Be sure to stop by the basement area of the Middleburg Professional Center on 119 The Plains Road for more from Another Blue Moon. You can also check them out on Instagram @anotherbluemoon to see what’s available now. New inventory is added regularly.

This article first appeared in the June 2022 Issue. 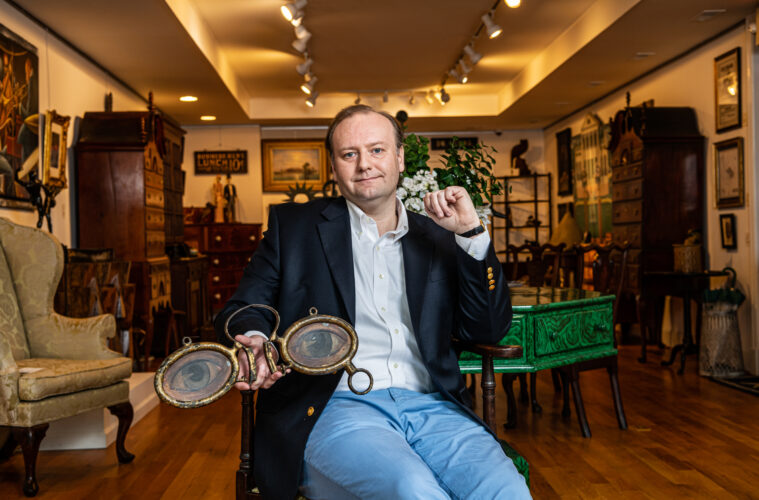 Thistlethwaite Americana, an antique gallery on Washington Street, has an inviting atmosphere with a gracious host. The proprietor, Taylor Thistlethwaite, loves to offer up stories that delight novice and established antique collectors alike. The traditional “don’t touch” mentality is not what you’ll find here. “Let’s sit down at an 18th-century table and have a cup of coffee,” he says. Thistlethwaite wants to get to know his customers, share stories about the items in his collection, and help potential patrons discover something that makes them happy. “I always say, you should be able to sit in a room at night and an object should speak to you.”

Everything displayed on the walls and showcased on the floor is hand-selected by Thistlethwaite and is a reflection of his personal taste. His collection includes elegant furniture, folk art, mid-century items, and belongings that are perfect conversation pieces. At age 35, Thistlethwaite has earned a reputation in the antique world for his fine eye and exquisite taste. He is the youngest dealer to ever be accepted to The Winter Show, a prestigious art, antiques, and design fair held in New York City. He also participates in some of the country’s top antique shows including the Delaware Antiques Show and The Philadelphia Show.

“The piece behind you was designed by a guy named Paul Evans who was the father of American Brutalist furniture and on top we have a Harriet Frishmuth bronze. She was one of the greatest Art Deco American sculpturists. Then above that is a painting from the 1970s by Ernie Barnes who is one of the most seminal 1970s African American artists that we have right now,” he points out with excitement. Without skipping a beat, Thistlethwaite continues to exhibit his expertise and rich historical knowledge of every furnishing in the space. He points out an easy chair made in Philadelphia around 1750. “It’s one of the earliest known easy chairs of this form,” he says. “You look at the crazy lines and kind of spookiness of the arms compared to the brutal edge of the Brutalist piece next to it, and you see that this stuff doesn’t go perfectly together but it relates.”

Connecting the pieces to historical timelines and interpreting an artist’s logic in designing their work is just one of many facets of Thistlethwaite’s job. It’s not a skill you develop overnight —  it has to be acquired over time and through formal training. Thistlethwaite’s parents and grandparents were all collectors. He credits them for instilling his appreciation for antiques during his childhood. He grew up in Bethesda, Maryland, and moved to Glasgow, Kentucky, when he was around 13 years old. His family has had a farm in Glasgow since the late 1700s. “I fell in love with treasure hunting as a kid,” he says reminiscently about antique road trips with his father. “We used to go to Middleburg and then out to the [Shenandoah] Valley and hit all these antique shops and old estates. I remember him throwing me up in the attics and telling me to go find something up there.” That passion for treasure hunting never dwindled.

His father, a surgeon, collected antiques as a hobby. Thistlethwaite knew early on that a medical path was not for him. “I made a C in freshman biology so I knew I had to find something else,” he explains. He attended Centre College and earned a degree in American history with an emphasis on the colonial period. He then went to the University of Kentucky for a master’s in historic preservation. During this time, Thistlethwaite gained a wealth of knowledge as an intern for Sumpter Priddy, one of the foremost scholars on southern antiques. “I was doing work for him in the summer while I was in college and then when I went to grad school. I even helped him at The Winter Show, so it kind of came full circle that I was able to come back and do this on my own.”

In 2013, Thistlethwaite and his wife, Rebecca, opened a showroom on the first floor of his Alexandria home to display his inventory for collectors. In the midst of COVID-19, when many antique shows were canceled, Thistlethwaite was eating dinner in Middleburg and saw the for-lease sign in the space where Thistlethwaite Americana now lives. “What makes Middleburg so unique is the fact that we have so many people coming through from different areas and there’s already a strong collector base.” As Thistlethwaite explains, having a physical storefront is wonderful because he can serve everyone who walks in the door  — not just dealers.

The furnishings in his showroom are all unique to their place of origin. “Little markers” on the pieces help Thistlethwaite trace each object back to the individual cities in which they were made. This is all part of the allure of collecting antiques. “You have so much history combined into one piece. Maybe we don’t know who owned it initially, but these pieces have been treasured for hundreds of years so at least we can get some points,” he says.

As opposed to previous decades when people may have wanted a house entirely full of antiques, Thistlethwaite says people are shifting toward having just a few individual accent pieces. “You got to have fun with this stuff,” he says. “I have things in here for the novice collector or somebody who just is interested in getting started, all the way up to museum and collector grade.”

Given the passion that Thistlethwaite has for his inventory, one might wonder if it is difficult for him to part with the items. However, Thistlethwaite says discovering, photographing, and living with the items before passing them on to collectors is gratifying. “It’s not even about a sale, it’s more about adding to the next generation of the history [of the object].”

Thistlethwaite now lives in Upperville with his wife and their new son, William, who was born in April. He hopes to pass down his love for antiques and treasure hunts to his son. In the backroom of his shop, Thistlethwaite has an antique highchair waiting for William once he is old enough to sit at the table.

For Thistlethwaite, love of his profession stems from the joy his clients experience as new owners of his preloved pieces. He says, “As long as it’s something that captures your fancy or makes you smile, that’s what it’s all about.” ML

This article first appeared in the June 2022 Issue.