Upperville, VA, November 25, 2019– The annual Trinity Episcopal Christmas Service Wednesday December 18 at 7:00 pm will feature an exciting and fresh approach to Lessons and Carols this year by offering a two piano concert featuring the exciting classical duo, Paul & Sophia. The concert will include traditional lessons entwined with the magic of two professional pianists performing carols arranged by Paul and Sophia for Trinity’s festive holiday tradition. Their core belief about their music is that “it is a great unifying force for the world. It crosses all cultural boundaries and speaks to the heart”. They are excited to share their love for Christmas, Lessons, and Carols for everyone this sacred holiday season. This concert is free admission. All are welcome.

Born in Siberia to classically trained musicians, Pavlenko-Chandley was raised in Ukraine and grew up in the Musicians’ Residence in downtown Kiev. There she attended the Lysenko Conservatory and the famous Gliere Conservatory where she studied under Lydia Nikolayevna Kovtiukh.  She has traveled extensively throughout the world, and her original compositions have been performed by the Kiev Symphony and Chorus and the Raleigh Symphony Orchestra. She is a favored arranger and accompanist for the Emmy award winning tenor, John Fowler, the American bass-baritone soloist Jason McKinney, and the upcoming operatic tenor, Jeff Gwaltney. Currently Pavlenko-Chandley is a standing judge for North Carolina Piano Concerto competition, a founding board member of Opera Experience Southeast, and a member of the Mid-Ohio Opera Company.

Raised in North Carolina, Paul has an undergraduate degree in performance from the University of North Carolina at Chapel Hill, and a master’s and doctoral degree in performance from the Kansas City Conservatory of Music. He also studied at the Mozarteum Conservatory in Salzburg, Austria. His successful competitions include the International Beethoven Piano Sonata Competition and the Czarny Foundation Piano Competition. He was director and general manager of the Bayside Opera Company, New York City. He has played both at the Metropolitan Opera House and on Broadway. He is currently the Executive Director of Trinity Music Academy in North Carolina and the music director and conductor of the Mid-Ohio Opera Company. He has been a guest (and standing) conductor for the Raleigh Symphony Orchestra, the Kiev Symphony, the Rockhill Opera Company, the Kansas City Opera Company, and the Opera Company of North Carolina. 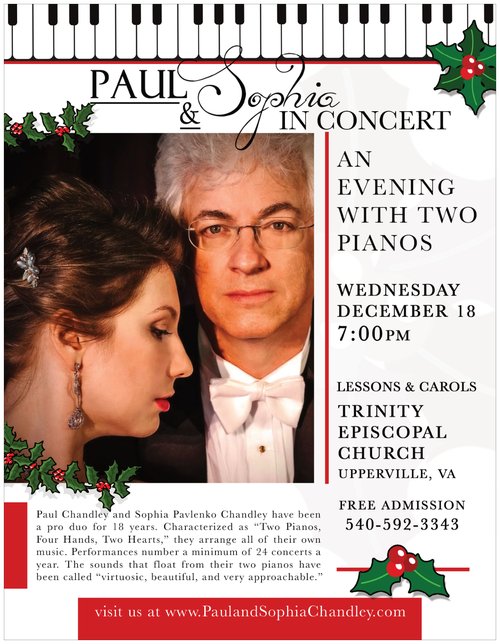