A horse dynasty in motion right here in Middleburg

Just before World War II, on a beach on the south coast of England outside the town of Wittering, a 7-year-old girl took a ride on a donkey that would change the course of her life.

For young Jo Wells, now Rectortown resident Jo Motion, her passion for horses was sparked and kindled by local stable owner Elizabeth Ferrand and the Surrey Union Hunt Pony Club. By 14, Jo hadcompeted in many gymkhanas (games on horseback) and was the amateur whipper-in for the Surrey Union Hunt. She began riding thoroughbreds and became enamored with their speed, agility and intelligence. 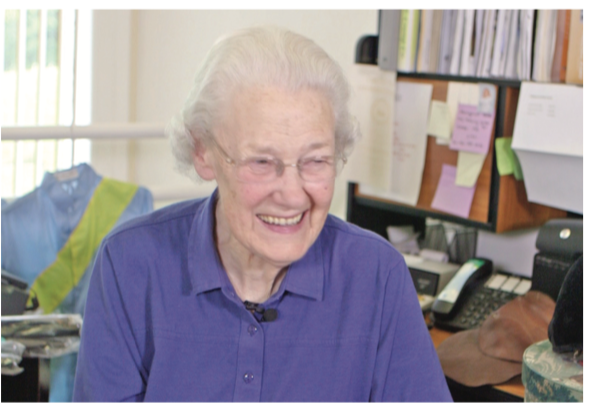 “I was personally very happy on a thoroughbred,” Motion said recently. “It was like driving a
fancy powerful car.”

Before long, Motion left school and began working for steeplechase trainer Jack O’Donoghue as a “lad” in his racing “yard,” including a former show jumping mare named Nickel Coin. For three years, Motion worked the mare over fences and galloped to keep her fit, often hunting her.

Hacking out near the North Downs of Dover to Epsom Downs for a workout was a regular event. Motion cleaned up after her and groomed, bathed and cared for her every need along with two other horses in the yard.

Motion, who owns the Middleburg Tack Exchange, explained that in England, when working in a racing stable, “you do your three.” That meant being responsible for three horses—grooming, tacking, mucking, riding, bathing, wrapping, feeding, hand-walking—whatever needed to be done.

Nickel Coin proved to be a phenomenal jumper, but not terribly fast by racing standards. Still, in 1951, after winning many qualifying steeplechases, Nickel Coin and Jo Wells traveled to Aintree Racecourse in Liverpool to face their ultimate challenge, the Grand National.

Young Jo rode Nickel Coin to stretch her legs around the Aintree grounds and looked at the foreboding obstacles, some with a 5-foot hedge that was 3 feet wide with a 5-foot ditch in front. She called her mother and said she was having second thoughts about the race.

The crowd at Aintree was 250,000, and while initial odds had Nickel Coin at 40-1, she was bet down to 10-1. The footing was soft for the course of 32 fences over 4 miles. The 36 horses approached the first fence and many fell. The announcer named them as best he could, and Nickel Coin was among them.

Jo gathered up her grooming kit, halter and supplies and ventured out after the horse, but stopped when she heard a call that the mare was up and running and didn’t fall after all.

Nickel Coin jumped flawlessly while others tumbled around her. Loose horses galloped alongside until they realized that jumping was indeed optional without a jockey. After the first revolution of the course was complete, the field narrowed to four. Nickel Coin and jockey John Bullock managed to safely navigate the remainder of the course and win the race.

Jo met them and escorted the horse to winner’s circle to celebrate the victory and assess the condition of the horse.

“It is a delightful story but complete fiction,” she said. But her story is not.

When asked about being a female in the “yard” or “on the backside,” she insisted she was treated equally and paid the same as the other “lads.”

“While there were few girls working in racing stables in those days ,” Motion said, “the work was equal and so was the pay. I never had any difficulty working in a man’s world.”

Motion first came to Middleburg in the 1950s after the Grand National, working for the Adams family as an assistant trainer at Belmont Park. The jumper string traveled south and Motion went with them. She stayed at the Red Fox Inn and dined across the street at what used to be the Pharmacy, because it had a lunch counter with reasonably priced food.

Her training operation was at Burrland (now Hickory Tree Farm) off The Plains Road. She returned to England to marry her childhood sweetheart and pony club comrade, Michael Motion, in 1956. Together, they raised their four children and many horses, cows and pigs at their Herringswell Grange Farm outside of Newmarket. Later, they returned to the United States. and settled in Middleburg for good in 1986.

Jo Motion is the matriarch of an equestrian dynasty. Her husband served as bloodstock agent for many fine thoroughbreds and their son Andrew continues in that tradition right here in Middleburg. At Andrew’s first appearance in the Saratoga yearling sale last month, he sold a filly for $285,000.

Beware, parents. All it takes is a donkey ride and you may be off to the races!