Middleburg Red Sox Have Their Own Field of Dreams

The baseball diamond—their local version of a “Field of Dreams”—is situated behind the Hill School.

It’s the home of the Middleburg Red Sox, though Kevin Costner is nowhere in sight. Instead, there’s long-time Middleburg resident Ted Eldredge, who says “I’ve always been a baseball fan,” the main impetus that led to him starting the team 21 years ago with fellow baseball enthusiast Marcus Bulmer. 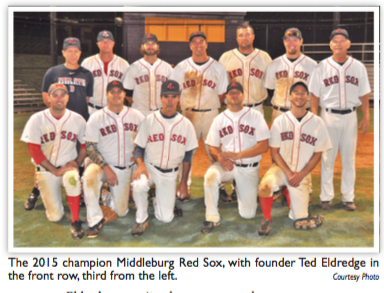 Their roster is filled with former high school and college baseball players, all long past their youthful primes. When they founded the team, Eldredge and Bulmer both had played with the Warrenton Orioles and wanted to compete a bit closer to home.

The Red Sox play in the D.C. Men’s Senior Baseball League, the largest adult league in the Washington area with over 1,200 participants. Players can join teams in age groups ranging from 18 to 25 all the way to 55 and over. There are two divisions, Western and Eastern, in which Middleburg competes in the 25 and older category.

The Red Sox play eight home games at Hill, traveling to their remaining regular season games in car pools or individually before competing in championship play at the end of the season. The fan base? Mostly wives, girlfriends and kids.

Eldredge recruits players any way he can.

“Sometimes I find them at gas stations,” he said, recalling that he recently was driving through Marshall and came across a young man who, once the team was mentioned, said he’d love to play. “It just takes a lot of luck.”

Over the years, the Red Sox have had a number oftalented players. Eldredge said about a third of the current team played college baseball, some on varsity teams, others on clubs. Most played high school ball, as well.

For a while, the team had a player with experience in the Mexican professional league, Ivan Montalvo, who decided to move back to his home country. Players come and go, with a shelf life Eldredge estimated between two and six years, with injuries a major factor in attrition.

Chris Rousseau, a former Hill School parent, was a talented pitcher who only played one season. In a game at Mickey Gordon Park just east of town, he broke the humerus bone in his arm and never came back.

“Sometimes they leave and start families,” Eldredge said, adding that players occasionally will take a leave of absence and then return when they can. The Red Sox range in ages from their 20s to their 50s, with a wide variety of backgrounds. All have one thing in common—a lifelong love for the game.

“Post office workers, ticket scalpers, several accountants, lawyers, architects, and even a doctor” have all played for the Middleburg team over the years, Eldredge said.  Casey Davenport, who starred at Ferrum, is a talented pitcher. He’s 31 and teaches health and physical education in the Loudoun school system. Patrick Wingfield is 31 and played for the University of Virginia for four years, including one season with then teammate Ryan Zimmerman, now with the Washington Nationals.

Last year,  Middleburg went 11-5 and finished second in their division, then won four in a row in the playoffs and won the league championship. Over the years, they’ve only had one losing season, and in 2002 finished 17-1, their best ever record. This year, they were 9-5 going into the last week of July.

Eldredge and his teammates say they’re particularly appreciative of Hill School’s willingness to allow them to play on their field. Hill’s grounds supervisor Bob Dornin takes care of the grass cutting and Eldredge handles the infield. Every three or four years, he purchases 25 yards of infield soil mix to be added to the pitching mound and between the bases. And he does most of the grooming himself.

All the players are pure amateurs. So much so, in fact, they all pay to play. Annual dues are $265, which covers the cost for baseballs, field fees on the road and umpires. They even purchase their own uniforms. For Eldredge, a Hill School graduate and real estate agent, it’s truly a labor of love that’s part of his life eight months a year.

“What I enjoy is finding new players, coaching and working outside on the field,” said Eldredge, who manages the team and is a part-time outfielder. “I’m there from March through October maintaining the field, or weeds would take over in the infield. The team is like a fraternity to me.”

Playing on a field of their own dreams.