By Dulcy B. Hooper | Photos by Richard Hooper

“I was totally deprived in my childhood,” recalled Margaret Gardner, a longtime Middleburg resident whose early years were spent in the United Kingdom. She spoke only slightly tongue in cheek.

“All the rocking horses in England had disappeared after the war, for obvious reasons.” The First World War (1914-1918) led to a decline in the manufacture of rocking horses due to the shortage of materials and the fact that the skilled craftsmen required to make them were more often engaged in war efforts. The Second World War (1939-1945) precipitated yet another decline.

Rocking horses have a long history. An early predecessor was carved horses on wheels, which children used to practice jousting skills while watching competitions involving live horses. More traditional rocking horses became popular throughout Europe in the 1800s, but the golden age of rocking horses occurred during the Victorian era. A dappled gray rocking horse was a favorite of Queen Victoria, whose love of rocking horses contributed to the increased popularity of such toys.

According to “The History of the Rocking Horse” by Bailey Rosenberg, “the popularity of this children’s toy increased when manufacturers began to primarily place the horse on two curved boards that enabled the children to rock back and forth, which led to the widely used name of ‘rocking horse.’”

“I didn’t get a rocking horse,” Gardner recalled, “and, worse yet, I didn’t even get a pony.” Instead, the 6-year-old Gardner (then, Margaret Iliffe) did the next best thing.

“I bought all the bits and pieces of horse tack I could afford on my pocket money,” she said. “Bridles were too expensive, but I was able to acquire an Irish martingale, stirrup leather and, the next month, a pair of stirrups.” She displayed her ever-evolving finds on the walls of her nursery, continuing to hope for a pony or rocking horse of her own. 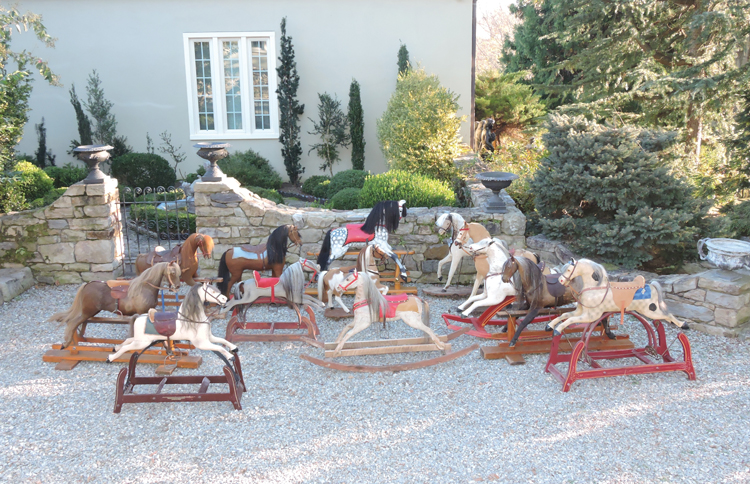 After leaving the U.K., Gardner set about making up for her childhood “deprivations” — owning and boarding dozens of horses in Middleburg, as well as the Texas cities of Austin and San Antonio. She served as joint master of the Middleburg Hunt for more than 10 years, showed well-known horses in sidesaddle, competed locally and nationally, and showed jumpers up and down the East Coast.

“I made field hunters,” she said, “and I straightened out other people’s horses for them.”

Somewhere along the way, Gardner’s childhood affinity for rocking horses was resurrected. “Dennis Osborne was working for the Warburgs at the time,” Gardner recalled. “He had created an English-style rocking horse, perhaps from a kit. It caught my eye and I bought it from him. That’s the one that really got me going.”

That rocking horse has been followed by 12 or 13 more. They were mostly American-made from the late 1800s and early 1900s, one English rocking horse and one or two German pull-toy horses.

Gardner prefers “the poor, motley things, because they give me the urge to restore them. In fact, the worse off they are, the more likely I am to buy them.” In addition to restoring manes, tails, saddles and other accouterments, Gardner often has the rockers themselves repaired or replaced. Some of Gardner’s horses feature safety-stand gliders, while others have bow rockers. 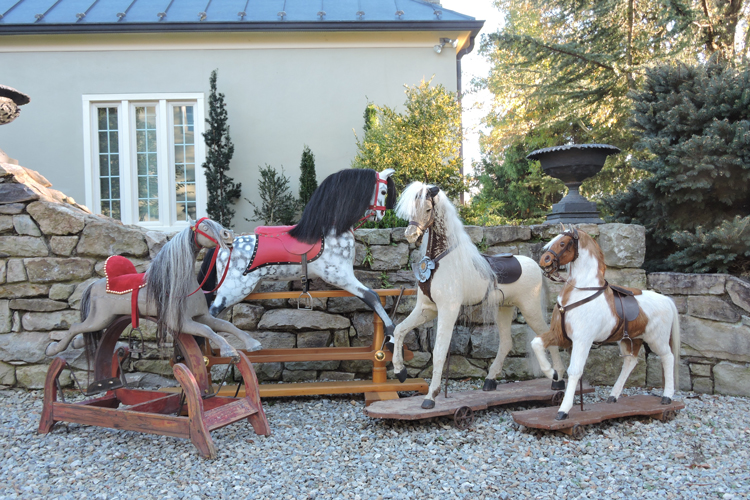 The restoration of one rocking horse, in particular, required many months of effort.

“I put the most into this one,” Gardner said, indicating a horse that had taken over a place of prominence on a kitchen counter while it was being restored. “The fur was all moth-eaten and mostly gone; it did not have a mane or a tale.” Gardner spent many hours positioning the hide, ensuring that it would lie in the correct direction, finding the right mane and tail.

For one of her “rescues,” Gardner had a saddle made by The Tack Box Inc. “That horse deserved it,” she said. For another one, although it had lost most of its hide, Gardner preferred to leave it as it was.

“This one with the blue ribbon is so pretty,” she said, “that I didn’t want to even touch it.” Another “rescue” has sleigh bells and a harness and reins, allowing a child to stand behind and urge the horse forward as it is being pulled from the front.

It is a labor of love and Gardner shows no sign of scaling back her rescue effort.

All these years later, Gardner continues to “straighten out other people’s horses.” ML