Valerie Ashker crosses the USA on her Thoroughbred

A 60-year-old woman riding her off-the-track Thoroughbred (OTTB) across the United States to raise awareness of the vitality and worth of ex-racehorses is due to trot into Middleburg Nov. 19, concluding her odyssey on a high note in horse country.

Valerie Ashker, the mother of four-star eventer Laine Ashker, has often said her daughter’s stellar career has been “made on the backs of Thoroughbreds.” And the cross-country trek into the unrelenting glare of the eastern sunrises, dogged by setbacks, injury and obstacles, is the least she can do to thank the noble breed for putting her and her daughter on the horse-sport map.

“When I ride into Middleburg, what I want people to see, more than anything, are two ambitious, bright, athletic and happy looking horses,” said Ashker of the two OTTBs making the journey. “My ambition since Laine has made it to the upper echelons to compete against the best riders in the country is to show that we’ve done it all on the back of an off-track Thoroughbred.”

With that in mind, Ashker and riding partner Peter Friedman set out from California May 9: Ashker riding 7-year-old bay gelding Primitivo, and Friedman mounted on 17-year-old gelding Solar Express. 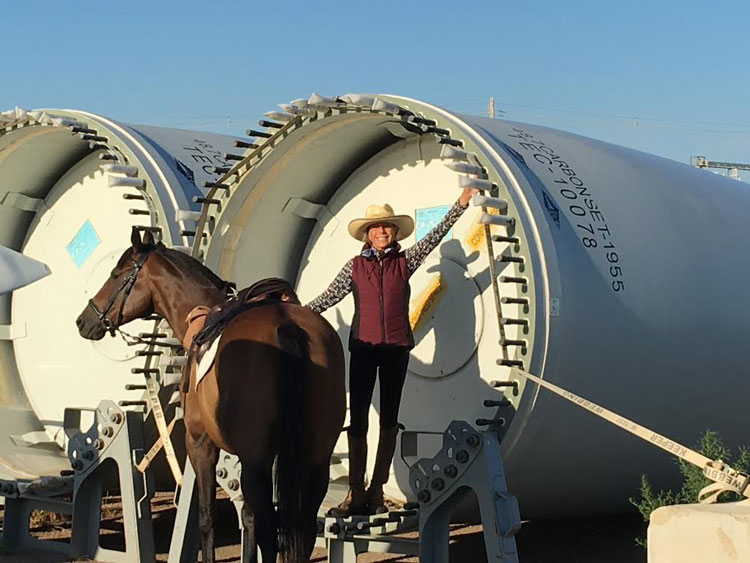 Noting that both horses earned their chops on the racetracks before coming into her barn, Ashker said they were strong and bright throughout the trip.

And that’s saying something, she said, noting that Solar broke his leg on the racetrack as a 3-year-old, but went on to become her personal eventer before taking on this challenge.

“Solar was my event horse for 13 years. We rode everywhere on the East Coast, and with Laine as well. And he went to Florida for torturous lessons with Buck Davidson,” Ashker said.

“Looking at him and his buxom, quarter horse-type body, nobody would ever guess he had a right, condylar fracture of his cannon bone as a 3-year-old. Many people wouldn’t take a horse who broke his leg on the track, but Solar proves that what you see on a piece of X-ray film cannot foretell the future. He turned out to be one of my best horses.”

And the youngster on the trip, Primitivo, has been equally amazing, she said. “This horse has been freakishly good about how well he’s handled this trip,” she said. “If I gave him two or three weeks off, he could probably turn around, head west, and do it all over again!”

Noting that both horses rode in bitless bridles and wore glue-on shoes, Ashker said the pair tackled the hardest part of the journey first. Because they traveled west to east, the animals hiked up the Sierras in 7,000-foot altitudes and conquered 13 summits in Nevada early into the trip. 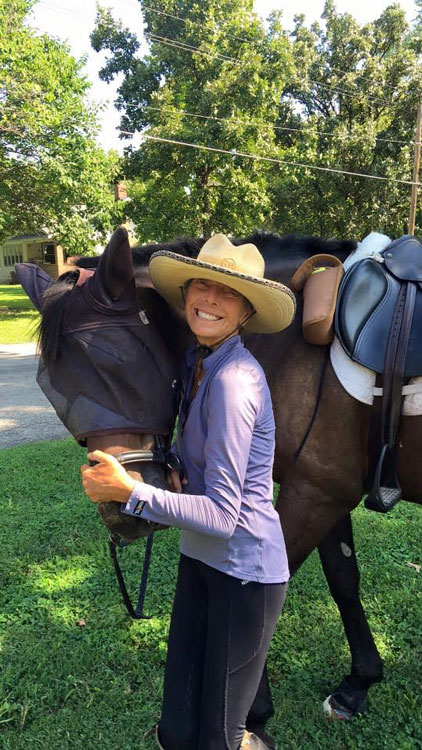 Traveling roughly 20 miles a day, horses and riders rose in the early morning hours to eat and break down makeshift paddocks. The horses walked, trotted and occasionally cantered along the shoulder of roadways, while a driver accompanied them with a large trailer outfitted for both horse and human.

Staying mainly along the Interstate 50 corridor, Ashker and her team weathered some challenges: she broke ribs after she was kicked and broke her clavicle when she fell in Utah. And during a routine X-ray of the broken bones, a white mass, ultimately proving to be benign, was discovered on Ashker’s lungs.

The emotionally packed journey was buoyed by fans who turned out along the way, showing support, sometimes riding along, other times offering a site to make camp.

“When I look back on this journey, what I’ll remember most is the beauty of this country and the kindness of its people,” Ashker said. “This has been an epic journey.” ML

Susan Salk is the creator of Off-Track Thoroughbreds, a blog dedicated to telling the success stories of off-track Thoroughbreds who have transitioned into other careers or retirement. Read more of her writing at offtrackthoroughbreds.com.