By Dulcy B. Hooper

When my husband and I moved to Virginia four years ago, the garage attached to our new house seemed an anomaly, at best.

“What the heck are we going to do with all this?” I asked Richard, the two of us standing in the midst of a huge amount of useless space. After nearly 20 years of inner-city living, we had mastered the art of street parking. I remember a neighbor watching in awe as I wedged my car, inch by inch, between two cars notably more upscale than mine. We were all but bumper to bumper.

“I’m hoping they will mate,” I said to the neighbor as I got out of the car.

It never occurred to us to actually use the garage for its intended purpose. Instead, we filled it up with gardening tools, leftover cans of paint and a hodgepodge of items we didn’t really want but couldn’t quite part with.

Along with the move to Virginia, Richard had decided it was time to move on to something different. Through Hooper’s Books & Art, he had spent several decades immersed in rare books, art and antiques related to dogs and horses. A visit to the Musée de la Chasse et de la Nature in Paris triggered the inspiration for what would come next.

Richard purchased a catalog of the exhibit “The Life of Dogs” primarily as a reference for the ornate dog collars. Soon enough, however, he was busy researching the history of dog beds and paying much more attention to the catalog’s illustrated French dog niches going back to the 18th and 19th centuries.

Within short order, our once-useless garage was retrofitted with shelves, work tables and a configuration of bright overhead lights, followed by the delivery of a lathe, drill press, shaper, table saw, band saw, carving tools and sharpeners. Stacks of wood were everywhere.

Richard began churning out one beautiful niche after the next, inspired by the 18th and 19th century dog beds. No two were alike and all, to my mind, were exquisite. I was happy that Richard was using his knowledge of history, dogs and art as well as another interest that had lain dormant for years: woodworking. 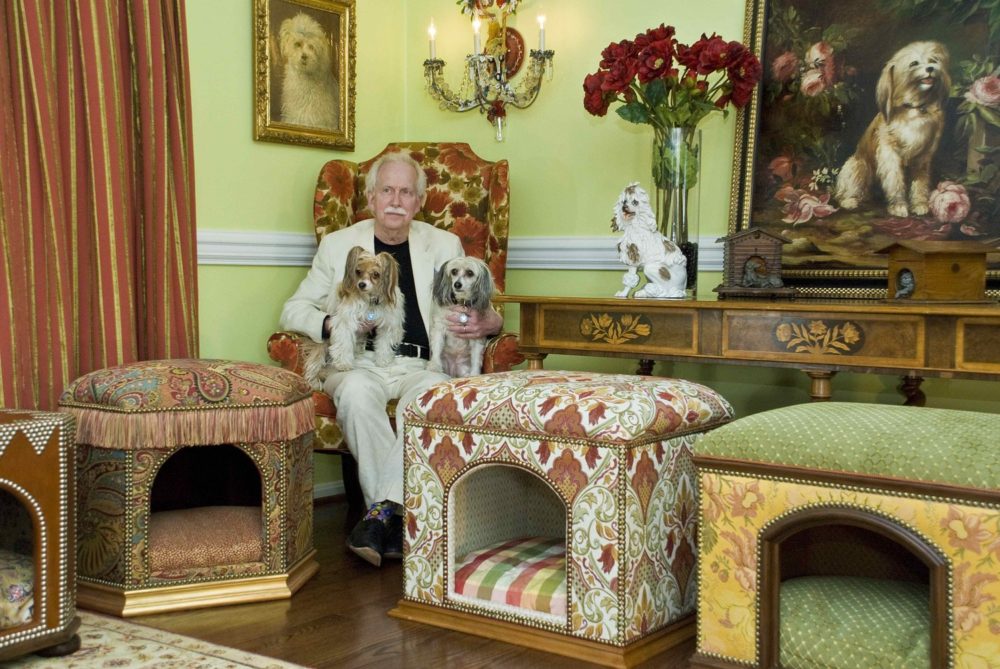 Richard Hooper with his dogs, Sophie and Isabel (photo by Crowell Hadden).

Chateaux de la Pooch was launched at the National Dog Show last November, an annual
event that is broadcast on Thanksgiving Day. We were thrilled by the enthusiastic response — so many dogs trying out the beds and so many of their human companions expressing curiosity and compliments.

“I’ve been going to dog shows forever,” one visitor said, “and this is the best new dog product I have seen in years.”

I was delighted to be surrounded by incredible dogs of every imaginable breed. And even though I didn’t always know exactly what I was talking about, I was more than happy to help Richard out by talking about Chateaux de la Pooch.

“Actually, it was the 14th,” Richard corrected me.

“And one of the earliest beds is on display at the Wrightsman [Galleries] at the Metropolitan Museum of Art,” I said. “It was owned by King Charles.”

I moved on to another customer — a woman with a tape measure, a notepad and a determined look on her face, focusing her attention on one of my favorite niches.

It was one thing to show the niches and talk about the history behind them. It was another thing altogether to think about other people owning them.

“Don’t go near that bed,” I said under my breath, apparently loud enough that Richard heard me.

“Why don’t you take a break and go over to the center ring for the agility competition?” he suggested. “And how about taking your laptop or book and staying over there for a while?”

I left reluctantly, thinking as I walked over to the competition about how fond I was of all the niches — each one was my favorite. Returning to the booth an hour or so later, I was relieved to see that all the beds were still there.

“That woman was a close call,” I said.

“She’s coming back with her husband tomorrow,” Richard said.

“I mean, you’re not letting these beds go to just anyone, are you?  Do you have an application form or something for them to fill out?”

“They’re called invoices,” Richard said. “Bills of sale. And I hope to be filling out lots of them.”

The next major event was the High Point Market in North Carolina. Hundreds of designers, decorators and architects stopped by to admire the niches and ask about Chateaux de la Pooch. One gentleman stood for several moments, studiously admiring one of my favorite niches from all angles before dramatically throwing open his arms and exclaiming, “Magnifique!”

High Point led to an invitation to Hamptons Contemporary, a design show in Southampton, New York. It was there that Richard and I met New York interior designer Sasha Bikoff and her tiny Pomeranian, Puff Daddy.

“These are fabulous!” Sasha exclaimed. “And the name — Chateaux de la Pooch — I love the name!” We noticed that a number of camera crews were following Sasha Bikoff around. Puff Daddy was gamely trying out a few of the niches while Sasha posed for photos.

Sasha left, but returned later in the day.

“I am designing one of the rooms for Holiday House,” she said. “And one of these niches would be perfect.” Next thing you know, one of my favorite niches was off to the designer show house in the Southampton hamlet of Water Mill, New York.

“I mean, I don’t really care if Puff Daddy gets a niche,” I said to Richard. “Or FeeBee or Auggie or even Ringo or Max or Pepper.” We had by now met a number of memorable dogs at the various Chateaux de la Pooch outings.

As difficult as it is, I am getting used to the niches finding new homes.